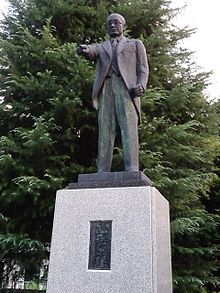 Memorial statue of Masanobu Tsuji in Kaga, Ishikawa
In this Japanese name, the family name is "Tsuji".

Masanobu Tsuji (辻 政信, Tsuji Masanobu?, 11 October 1901? – 1961?[1]) was a tactician of the Imperial Japanese Army during the Second World War and later a politician. While he was never indicted for war crimes after World War II, subsequent investigations have revealed that he was involved in war crimes throughout the Pacific war including the massacre of Chinese civilians in Singapore, the executions of numerous surrendered prisoners of war during the Bataan Death March, and other war crimes in China.

Masunobu Tsuji was born in the Ishikawa Prefecture in Japan. He received his secondary education at a military academy and then graduated from the War College.

Tsuji served as a staff officer in the Kwantung Army in 1937-1939. His aggressive and insubordinate attitude contributed to the Soviet-Japanese Border Wars, particularly the Changkufeng Incident/Battle of Lake Khasan and the Nomonhan Incident/Battle of Khalkhin Gol.[2]

During the Pacific war he served mainly in Malaya, Burma, the Philippines, and Guadalcanal.[3] He served as a staff officer under General Tomoyuki Yamashita.[4] At Guadalcanal, Tsuji planned and led the last two attempted assaults by the Japanese forces to expel the Americans from the island. Tsuji personally returned to Tokyo after these failures to urge the evacuation of the troops from Guadalcanal. He impressed the Emperor with his frankness.

In Retribution: The Battle for Japan, 1944-45, Max Hastings wrote, "Col Masanobu Tsuji [was] a fanatic repeatedly wounded in action and repeatedly transferred by generals exasperated by his insubordination. Tsuji once burned down a geisha house to highlight his disgust at the moral frailty of the officers inside it. His excesses were responsible for some of the worst Japanese blunders on Guadalcanal. He was directly responsible for brutalities to prisoners and civilians in every part of the Japanese empire in which he served. In northern Burma, he dined on the liver of a dead Allied pilot, castigating as cowards those who refused to share his meal: 'The more we eat, the brighter will burn the fire of our hatred for the enemy.'"[5]

After Japan's surrender in September 1945, Tsuji went into hiding in Thailand for fear of being tried on war crimes charges. When it was clear he would not be, he returned to Japan and wrote of his years in hiding in Senko Sanzenri (潜行三千里, lit. Lurking 3000 li), which became a best seller. His memoirs made him famous and he later became a member of the Diet. In April 1961, he traveled to Laos and was never heard from again. Presumably a casualty of the Laotian Civil War, he was declared dead on July 20, 1968.[6]