Modern pentathlon at the 2004 Summer Olympics

Modern pentathlon at the 2004 Summer Olympics 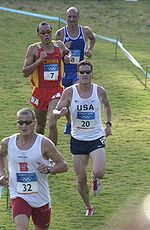 Final segment of the men's event

The modern pentathlon at the 2004 Summer Olympics took place at the Olympic Modern Pentathlon Centre at the Goudi Olympic Complex as single day events for men and women on August 26 and August 27, respectively.

The five segments of the event were sport shooting, fencing, swimming, equestrianism, and cross-country running. They were held in that order, with each segment awarding points to competitors based on their performance in the segment. The points from each of the events were summed to give a final ranking; in addition, the running segment at the end of the day used a staggered start designed so that the order in which runners finished would be the same as their ranking by total points.

Qualification for the modern pentathlon event was run by the International Modern Pentathlon Union (UIPM). 32 men and 32 women qualified, with a limit of 2 competitors per gender for each National Olympic Committee. As a minimum, men were required to have earned 5,100 points either on the 1 June 2004 UIPM ranking list or at a continental qualifying competition. Women needed 4,800 points. The pentathlete must have also earned one of 30 qualifying places at a tournament or one of 2 invitational places.

In addition, the host nation was guaranteed at least one competitor in each gender if none qualified as above, and the Tripartite Commission allocated one invitational place. If more than one of the qualification places was won by a single competitor or more than two were won by a single NOC, the field was brought up to 32 competitors by selecting the highest-rated pentathlete on the UIPM ranking list of 1 June 2004.

The men's competition was contested on 26 August.

The women's competition was contested on 27 August.