The 2005 Kashmir earthquake was a major earthquake centered in Pakistan-administered Kashmir known as Azad Kashmir, near the city of Muzaffarabad, affecting Gilgit-Baltistan and Khyber Pakhtunkhwa province of Pakistan. It occurred at 08:52:37 Pakistan Standard Time (03:52:37 GMT) on 8 October 2005. It registered a moment magnitude of 7.6 making it similar in size to the 1906 San Francisco earthquake, the 1935 Quetta earthquake, the 2001 Gujarat earthquake, and the 2009 Sumatra earthquakes. As of 8 November, the government of Pakistan's official death toll was 75,000. The earthquake also affected countries in the surrounding region where tremors were felt in Tajikistan and western China, while officials say nearly 1,400 people also died in Indian-administered Kashmir and four people in Afghanistan. The severity of the damage caused by the earthquake is attributed to severe upthrust, coupled with poor construction.

Well over US$ 5.4 billion (400 billion Pakistani rupees)[1] in aid arrived from all around the world. US Marine and Army helicopters stationed in neighbouring Afghanistan quickly flew aid into the devastated region. Five crossing points were opened on the Line of Control (LoC) between India and Pakistan to facilitate the flow of humanitarian and medical aid to the affected region, and international aid teams from around the world came to the region to assist in relief.[2][3][4]

Map depicting tectonic plates shows how Pakistan lies on the direct fault line of South Asia, The Middle Eastern Iranian plate and the Eurasian Plate in the north

Pakistan-administered Kashmir lies in the area of collision of the Eurasian and Indian tectonic plates.[5] The geological activity born out of this collision, also responsible for the birth of the Himalayan mountain range, is the cause of unstable seismicity in the region. The Pakistan Meteorological Department estimated the 5.2 magnitude on the richter scale. The United States Geological Survey (USGS) measured its magnitude as a minimum of 7.6 on the moment magnitude scale, with its epicentre at 34°29′35″N 73°37′44″E﻿ / ﻿34.49306°N 73.62889°E﻿ / 34.49306; 73.62889, about 19 km (12 mi) northeast of Muzaffarabad, Pakistan-administered Kashmir, and 100 km (62 mi) north-northeast of the national capital Islamabad. The earthquake is classified as "major" by the USGS. The hypocenter was located at a depth of 26 km (16 mi) below the surface.[6] The Japan Meteorological Agency estimated its moment magnitude at 7.8.[7] By comparison, the 2004 Indian Ocean earthquake had a magnitude of 9.15. The worst-hit areas were Pakistan-administered Kashmir, Khyber-Pakhtunkhwa,and western parts of the Kashmir valley in Indian-administered Kashmir. Also affected were some parts of the Pakistani province of Punjab, the capital city of Islamabad, and the city of Karachi which experienced a minor aftershock of magnitude 4.6. There were many secondary earthquakes in the region, mainly to the northwest of the original epicentre. A total of 147 aftershocks were registered in the first day after the initial quake, of which one had a magnitude of 6.2.[6] Twenty-eight of these aftershocks occurred with magnitudes greater than the original quake. On October 19, a series of strong aftershocks, one with a magnitude of 5.8,[6] occurred about 65 km (40 mi) north-northwest of Muzaffarabad.[8] As of 27 October 2005[9] there have been more than 978 aftershocks with a magnitude of 4.0 and above that continue to occur daily. (See USGS for a list of recent aftershocks and effects.) Since then, measurements from satellites have shown that mountain parts directly above the epicenter have risen by a few meters, giving ample proof that the rising of the Himalayas is still going on, and that this earthquake was a consequence of that.[10]

Most of the casualties resulting from the earthquake were in Pakistan, where the official confirmed death toll was 74,698, putting it higher than the massive scale of destruction of the 1935 Quetta earthquake.[11] International donors have estimated that about 86,000 died but this has not been confirmed or endorsed by Pakistani authorities.

As Saturday is a normal school day in the region, most students were at schools when the earthquake struck. Many were buried under collapsed school buildings. Many people were also trapped in their homes and, because it was the month of Ramadan, most people were taking a nap after their pre-dawn meal and did not have time to escape during the earthquake. Reports indicate that entire towns and villages were completely wiped out in Northern Pakistan with other surrounding areas also suffering severe damage.

"...a second, massive wave of death will happen if we do not step up our efforts now", Kofi Annan said on 20 October with reference to the thousand remote villages in which people are in need of medical attention, food, clean water and shelter and the 120,000 survivors that have not yet been reached."[12]

"made the appeal to survivors" on 26 October to come down to valleys and cities for relief,[2] because bad weather, mountainous terrain, landslides and blocked roads are making it difficult for relief workers to reach each house and the winter snows are imminent."

In Islamabad, the Margalla Towers, an apartment complex, collapsed and killed many of the residents.

Four deaths were reported in Afghanistan, including a young girl who died in Jalalabad after a wall collapsed on her. The quake was felt in Kabul, but the effects were minimal. 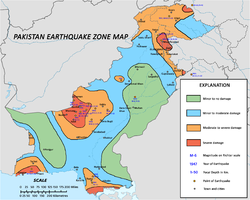 Most of the devastation hit north Pakistan and Pakistan-administered Kashmir. In Kashmir, the three main districts were badly affected and Muzaffarabad, the state capital of Kashmir, was hardest hit in terms of casualties and destruction. Hospitals, schools, and rescue services including police and armed forces were paralysed. There was virtually no infrastructure and communication was badly affected. More than 70% of all casualties were estimated to have occurred in Muzaffarabad. Bagh, the second most affected district, accounted for 15% of the total casualties.

The national and international humanitarian response to the crisis was huge. In the initial phases of response Pakistan Medical corps, Corps of Engineers, Army aviation and large number of infantry units played important role. Lt.Gen Afzal, Maj.Gen. Imtiaz, and Maj.Gen Javid were the leaders of their formations. Maj.Gen Farrukh Seir was in charge of foreign relief co-ordination. In early 2006, the Government of Pakistan organized a donors' conference to raise money for reconstruction and development of the area. A total of $6.2 billion was pledged and a large amount of the money was delivered in terms of services of international NGOs with high pay scales. The rest of the money pledged, which was given to the Government of Pakistan for reconstruction and development, was used by a reconstruction authority called ERRA which was made by then military regime to accommodate retired high military officials and while keeping the command of the reconstruction and rehabilitation authority directly under the military. This authority has highly been criticized for luxurious non-developmental spending and false statistics. Practical reconstruction and rehabilitation were carried out by Turkey, Japan, Saudi Arabia and the UAE.[citation needed] The UN and US were criticised for not taking practical steps, rather focusing on training and seminars costing millions.[citation needed] The basic infrastructure—including tertiary care, health, education, road networks, water supply, waste management and other basic needs—is still underdeveloped and has not reached pre-earthquake status in the region.