Car Talk is a radio talk show broadcast weekly on National Public Radio stations throughout the United States and elsewhere. Its subjects are automobiles and repair, and it often takes humorous turns. The hosts of Car Talk are brothers Tom and Ray Magliozzi, also known as Click and Clack, the Tappet Brothers.

Car Talk is structured as a call-in radio show: listeners call with questions related to motor vehicle maintenance and repair. Most of the advice sought is diagnostic, with callers describing symptoms and demonstrating sounds of an ailing vehicle while the Magliozzis make an attempt at identifying the malfunction. While the hosts pepper their call-in sessions with jokes directed at both the caller and at themselves, the depth and breadth of their knowledge of automobiles is extensive, and they are usually able to arrive at a diagnosis and give helpful advice. Also, if a caller has an unusual name, they will inquire about the spelling, pronunciation, and/or origin of their name. They may also comment about the caller's hometown. The Magliozzis previously took a break at approximately the half-hour mark of the show. More recently, two breaks divide the show into approximately 20-minute segments referred to as the "three halves" of the show. Between segments a piece of music related to cars will play.

Car Talk was first broadcast on WBUR in Boston in 1977. It was picked up nationally by NPR ten years later. NPR reports that it is heard on more than 370 stations by an audience of more than four million weekly listeners. The show is also carried on Sirius XM Satellite Radio via both the NPR Now and NPR Talk channels. These two NPR stations rebroadcast the show throughout the weekend.[2][3][4][5]

The show was the inspiration for the short-lived The George Wendt Show, which aired on CBS in the 1995-96 season.[6]

In May 2007, the program, which had only previously been available digitally as a paid subscription from Audible.com, became a free podcast distributed by NPR, after a two-month test period where only a "call of the week" was available via podcast.

Throughout the program, listeners are encouraged to dial the toll-free telephone number, 1-888-CAR-TALK (1-888-227-8255), which connects to a 24-hour answering service. Although the approximately 2,000 queries received each week are screened by the Car Talk staff, the questions are unknown to the Magliozzis in advance as "that would entail researching the right answer, which is what? ...Work."[6] Producers select and contact the callers several days ahead of the show's Wednesday taping to arrange the segment. The caller speaks briefly to a producer before being connected live with the hosts, and is given little coaching other than being told to be prepared to talk, not to use any written preparation and to "have fun". The show deliberately tapes more callers than they have time to air each week in order to be able to choose the best ones for broadcast. Those segments that do make it to air are generally edited for time. Since 2009 some new shows are edited to include previously broadcast segments as much as 10 years old. The re-used segments, including re-used puzzlers, are not being acknowledged as old material and are mixed in alongside new caller material.

The show opens with a short comedy segment, typically jokes sent in by listeners, followed by eight call-in sessions. The hosts run a contest called the "Puzzler," in which a riddle, sometimes car related, is presented. The answer to the previous week's "Puzzler" is given at the beginning of the "second half" of the show, and a new puzzler is given at the start of the "third half." The hosts give instructions to listeners to write answers addressed to "Puzzler Tower" on some non-existent or expensive object, such as a 26-dollar bill or an advanced digital SLR camera. This gag initially started as suggesting that the answers be written "on the back of a twenty dollar bill." A running gag concerns Tom's inability to remember the previous week's Puzzler without heavy prompting from Ray. For each puzzler, one correct answer is chosen at random, with the winner receiving a $26 gift certificate to the Car Talk store, referred to as the "Shameless Commerce Division."[7] It was originally $25, but was increased for inflation after a few years. A recurring feature is "Stump the Chumps", in which they revisit a caller from a previous show to determine the effect, if any, of their advice. A similar feature began in May 2001, "Where Are They Now, Tommy?"

Celebrities have been callers as well. Examples include Geena Davis, Morley Safer, Ashley Judd, Gordon Elliott, former Major League pitcher Bill Lee and astronaut John Grunsfeld calling from the Space Shuttle. There have been numerous appearances from NPR personalities, including Bob Edwards, Susan Stamberg, Scott Simon, Ray Suarez, Will Shortz, Sylvia Poggioli, and commentator and author Daniel Pinkwater. On one occasion, the show featured Martha Stewart as an in-studio guest, whom the Magliozzis twice during the segment referred to as "Margaret".

In addition to at least one on-orbit call, the Brothers once received a call asking advice on winterizing a couple of "kit cars." After much beating around the bush and increasing evasiveness by the caller, they asked him just how much these kit cars were worth. The answer: about $800 million. It was a joke call from the Jet Propulsion Laboratory concerning the preparation of the Mars Rovers (Spirit and Opportunity) for the oncoming Martian winter[episode needed]. Click and Clack have also been featured in editorial cartoons, including one where a befuddled NASA engineer calls them to ask how to fix the Space Shuttle[episode needed].

Humor and wisecracking pervade the program. They are known for their self-deprecating humor, often joking about the supposedly poor quality of their advice. They also comment at the end of each show: "Well, it's happened again - you've squandered another perfectly good hour listening to Car Talk."

At some point in almost every show, usually when giving the address for the Puzzler answers, Ray will mention Cambridge, Massachusetts (where the show originates), at which point Tom reverently interjects, "Our fair city."

Leading into each break in the show, one of the hosts leads up to the network identification with a humorous take on a disgusted reaction of some usually famous person to hearing that identification. The full line goes along the pattern of, for example, "And even though Roger Clemens stabs his radio with a syringe whenever he hears us say it, this is NPR: National Public Radio."

The ending credits of the show start with the colorfully nicknamed actual staffers (notably producer "Doug the subway fugitive, not a slave to fashion, bongo boy frogman Berman" and "John 'Bugsy' Lawlor, just back from the..." every week a different eating event with rhyming foodstuff names), but soon turn into a lengthy list of pun-filled fictional staffers and sponsors such as statistician Marge Innovera ("margin of error"), customer care representative Haywood Jabuzoff ("Hey, would you buzz off") meteorologist Claudio Vernight ("cloudy overnight"), optometric firm C.F. Eye Care ("see if I care"), Russian chauffeur Pikop Andropov ("pick up and drop off"), and law firm Dewey, Cheetham and Howe ("Do we cheat 'em and how").[8] 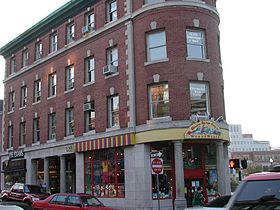 The name of the DC&H corporate offices is visible on the third floor window above the corner of Brattle and JFK Streets, in Harvard Square, Cambridge, Massachusetts.

The duo, usually led by Ray, are known for rants on the evils of the internal combustion engine, people who talk on cell phones while driving, Peugeots, women named Donna who always seem to drive Camaros, lawyers, the clever use of the English language, and practically anything else, including themselves. They have a relaxed and "humorous" approach to cars, car repair, cup holders, pets, lawyers, car repair mechanics, SUVs, and almost everything else. They often cast a critical, jaundiced insider's eye toward the auto industry. Tom and Ray are committed to the values of defensive driving and environmentalism.

The Magliozzis operate the Good News Garage in Cambridge, Massachusetts, a few blocks northwest of the MIT campus. The show's offices are located nearby at the corner of JFK Street and Brattle Street in Harvard Square, marked as "Dewey, Cheetham & Howe", the imaginary law firm to which they refer on-air. DC&H doubles as the business name of Tappet Brothers Associates, the corporation established to manage the business end of Car Talk. Initially a joke, the company was incorporated after the show expanded from a single station to national syndication.

The two were commencement speakers at MIT in 1999.

Main article: Click and Clack's As the Wrench Turns

On July 11, 2007, PBS announced that it had greenlit an animated adaptation of Car Talk, to air on prime-time in 2008.[11] The show is entitled Click and Clack's As the Wrench Turns,[12] and is based on the adventures of the fictional "Click and Clack" brothers' garage at "Car Talk Plaza". The first episode aired on July 9, 2008.[13]

Car Talk: The Musical!!! was written and directed by Wesley Savick, and composed by Michael Wartofsky. The adaptation was presented by Suffolk University, and opened on March 31st, 2011 at the Modern Theatre in Boston, MA.[14] The play was not officially endorsed by Tom and Ray, but they participated in the production, lending their voices to a central puppet character named "The Wizard of Cahs". The musical ran until April 3rd, 2011.[15]