The Holden VN Commodore was the sixth model of the Holden Commodore, a full-size car produced by the Australian automotive marque, Holden. It is essentially made out of an Opel donor body mated to either a Buick V6 or Holden V8, depending on the model, with slight tweaks to the front and rear ends and the Holden lion rebadging.

This and subsequent versions based their bodywork on the Opel Senator and Omega, and the car was released on 17 August 1988. As well as being highly based on the Opel Senator, the VN also was similarly based on the Opel Omega, but this time, the previous Holden VL Commodore floor plan was widened and stretched. The Commodore could now match the rival Ford Falcon for size. The VN Commodore was available in Executive, S, SS, Berlina and Calais specification levels, although a more basic SL model (opt. code A9K) was supposedly offered to government and fleet buyers, as it was not officially listed as part of the Commodore range. The VN Commodore was also awarded Wheels Car of the Year for a second time in 1988. From August 1990, a Commodore-based coupe utility was offered for the first time, known as the Holden VG Utility.[1] The Holden VQ Statesman and Caprice models, which were introduced in March 1990, were also VN Commodore based, but shared a longer wheelbase with the VN Commodore wagon and VG Utility.

Changes in the relative values of the Australian dollar, the yen, and the US dollar made it impractical to continue with the well-regarded Nissan engine of the VL. Instead, Holden manufactured their own 90 degree V6 based on an old Buick design from the US, although initially it was imported. The 5.0 litre V8 remained optional and received a power boost to 165 kW (221 hp). Both these engines used multi point GM EFI and the V6 using 3 coil-packs for ignition. Although not known for its smoothness or quietness, the V6 was nevertheless praised for its performance at the time. A fuel-injected, 2.0 L engined VN Commodore Four was offered for some export markets including New Zealand and Singapore, which were sold as the Holden Berlina sharing an engine with the Opel Vectra A. Accompanying the changes to engines, the 4-speed Jatco automatic transmission was replaced by the GM TH700 and the Borg-Warner T-5 5-speed manual gearbox.

In September 1989 the Series II of the VN Commodore was released with the EV6 motor. Some of the changes included a new cast exhaust manifold, new camshaft sprocket profile and timing chain, improved air and fuel distribution to combustion chamber, recalibrated ignition and injector firing within the engine management computer, wider conrod bearings and revised throttle uptake. The automatic transmission was also recalibrated to match the new engines torque characteristics. These revisions helped reduce initial torque levels whilst also improving the noise and vibration levels of the V6 engine.

Under the Hawke government's Button car plan, which saw a reduction in the number of models manufactured locally, and the introduction of model sharing, the VN Commodore was rebadged as the Toyota Lexcen, named after the late America's Cup yacht designer, Ben Lexcen. Subsequently the Toyota Corolla and Camry were, similarly, badged as the Holden Nova and Holden Apollo.

A total of 215,180 Holden VN Commodores were manufactured during the model's 3 year lifespan.

The VN series was assembled in New Zealand between 1988 and 1990. For the first few months of production it was actually assembled alongside its predecessor, the VL. This was due to the VL Commodore being slightly smaller, and offering a 2.0L RB20E(NZ Only) or 3.0 L RB30E Nissan straight-6 motor. 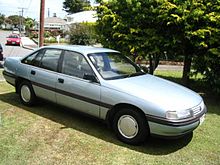 The Berlina 4-cylinder model was a unique car for New Zealand, as well as other export markets, and was unavailable to Australia. The 4-cylinder Berlina was developed in Australia primarily for the New Zealand market, it was equipped with an unemissionised fuel-injected 2.0 L motor (tuned to run on 96 octane fuel), essentially that of the Opel Vectra A mounted north-south, driving the rear wheels. The Berlina was available in both sedan and wagon body styles.

An indigenous sports model, the Commodore GTS, was also offered to the New Zealand market during 1990. Based on the New Zealand Executive models, the GTS featured a 3.8L V6 engine, manual or automatic transmission, bodykit (similar to that of the VN Commodore SS), alloys and FE2 suspension. It was a limited build, available in either White or Dark Blue.

The VN was the last Commodore to be assembled in New Zealand, after GM closed its plant in Trentham in late 1990, thereafter importing cars from Australia, duty-free.

The Commodore Executive was the baseline model of the VN Commodore range, and was priced from A$20,014 when new. 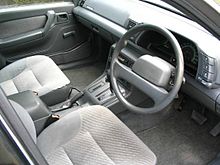 The Commodore S was the cheapest sports variant of the VN Commodore range, and was priced from A$21,665 when new.

The Commodore S standard features supersede and add to those of the Commodore Executive variant:[5] 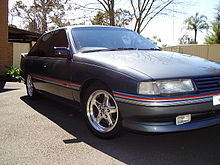 The Commodore SS was released in March 1989 and was the top of the line sports model of the VN Commodore range., and was priced from A$25,375 when new.

The Commodore Berlina was the semi-luxury version of the VN Commodore range, and was priced from A$24,781 when new.

The Commodore Berlina standard features supersede and add to those of the Commodore Executive variant:[9] 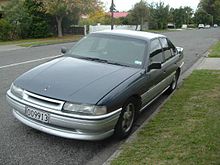 The Calais was the luxury version of the VN Commodore range, and was priced from A$31,265 when new.

The Calais standard features supersede and add to those of the Commodore Berlina variant:[11]

Limited edition and other specification levels 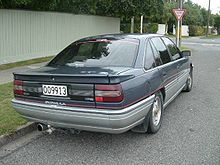 The Commodore BT1 or the Police Pack was a special pack for the VN Commodore that was available to the Australian and New Zealand Police Forces. It was based on the Commodore Executive and added various specification upgrades to cater to the needs of the Police Force.

The BT1 Commodores standard features supersede and add to those of the Commodore Executive. Although the pack varied in each state, they were commonly fitted with:

The Commodore Vacationer standard features supersede and add to those of the Commodore Executive variant:

The SS Group A SV was a race homologation special based on the VN Commodore SS. It was developed for Holden by Holden Special Vehicles and featured upgraded engine, transmission, brake and wheel specifications. Only 302 examples were produced.[13]