A cyclorama is a panoramic painting on the inside of a cylindrical platform, designed to provide a viewer standing in the middle of the cylinder with a 360° view of the painting. The intended effect is to make a viewer, surrounded by the panoramic image, feel as if they were standing in the midst of a historic event or famous place.

"Cyclorama" can also refer to the building designed to show the panoramic painting (pictured). 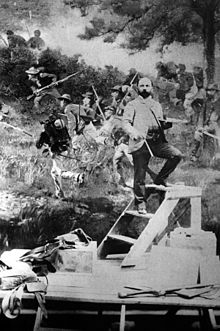 Paul Philippoteaux painting the Gettysburg Cyclorama circa 1883. From the archives of Gettysburg National Military Park

], who wanted to find a way to capture the panoramic view from Calton Hill in central Edinburgh, Scotland. He subsequently opened his first cyclorama building in Edinburgh in 1787.

Cycloramas were very popular in the late 19th century. The most popular traveled from city to city to provide local entertainment — much like a modern movie. As the viewers stood in the center of the painting, there would often be music and a narrator telling the story of the event depicted. Sometimes dioramas were constructed in the foreground to provide additional realism to the cyclorama. Circular and hexagonal-shaped buildings were constructed in almost every major US and European city to provide a viewing space for the cycloramas. For example, a 360° depiction of the land and naval battles of Vicksburg was completed and first exhibited in Paris. This work by Lucien-Pierre Sergent and Joseph Bertrand traveled to New York, Chicago and San Francisco and Tokyo.[1] Hundreds of cycloramas were produced; however, only about thirty survive.

An extension of this concept into motion pictures was pioneered with the invention of the Cinéorama that debuted at the 1900 Paris Exposition. These evolved into such formats as IMAX and Circle-Vision 360° as can be seen Epcot's Reflections of China.

The 1899 dramatisation of the novel Ben Hur was a Broadway smash hit. The main spectacle was the use of a live chariot race using real horses and real chariots set against a cyclorama. It ran for 21 years, and was seen by over 20 million people. [2] The Era's drama critic detailed how it was achieved by "four great cradles, 20ft in length and 14ft wide, which are movable back and front on railways". The horses galloped full-pelt towards the audience, secured by invisible steel cable traces and running on treadmills. Electric rubber rollers spun the chariot wheels. A vast cyclorama backdrop revolved in the opposite direction to create an illusion of massive speed, and fans created clouds of dust. The critic for The Illustrated London News described it as "a marvel of stage-illusion" that was "memorable beyond all else". The Sketch's critic called it "thrilling and realistic ... enough to make the fortune of any play" and noted that "the stage, which has to bear 30 tons' weight of chariots and horses, besides huge crowds, has had to be expressly strengthened and shored up". [2] It went on to inspire the multi-oscar winning 1959 film adaptation of Ben Hur, starring Charlton Heston - featuring the key live chariot race.

Some notable cycloramas still in existence include: 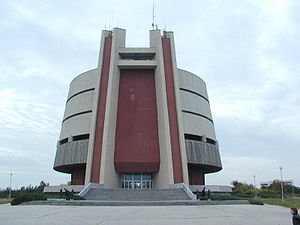 Pleven Panorama from the outside