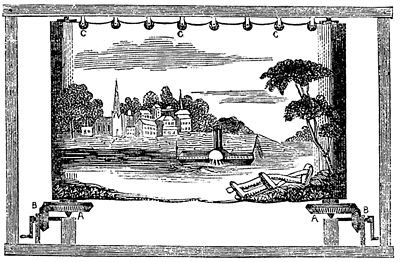 1848 illustration of a moving panorama designed by John Banvard

The moving panorama was a relative, more in concept than design, to panoramic painting, but proved to be more durable than its fixed and immense cousin. The word “panorama” is derived from the Greek words “to see” and “all.” Robert Barker invented the first panorama to describe his impressive paintings of Edinburgh in 1791. However, these paintings were not true panoramas, but rather contiguous views of passing scenery, as if seen from a boat or a train window. Installed on immense spools, they were scrolled past the audience behind a cut-out drop-scene or proscenium which hid the mechanism from public view. Unlike panoramic painting, the moving panorama almost always had a narrator, styled as its "Delineator" or "Professor", who described the scenes as they passed and added to the drama of the events depicted. One of the most successful of these delineators was John Banvard, whose panorama of a trip up (and down) the Mississippi River had such a successful world tour that the profits enabled him to build an immense mansion, lampooned as "Banvard's Folly", built on Long Island in imitation of Windsor Castle. In Britain, showmen such as the durable Moses Gompertz toured the provinces with a variety of such panoramas from the 1850s until well into the 1880s. In the mid-nineteenth century, the moving panorama was among the most popular forms of entertainment in the world, with hundreds of panoramas constantly on tour in the United Kingdom, the United States, and many European countries.

Moving panoramas were often seen in Melodramatic plays. It became a new visual element to theatre and helped incorporate a more realistic quality. Not only was it a special effect on stage, but it also served as an ancestor and platform to early cinema.

Moving panoramas (or sometimes moving dioramas) often recreated grand ceremonies. In Philadelphia in 1811 nearly 1,300 feet (400 m) of painted cloth were unwound to display the federal procession of 1788,[1] and George IV's coronation in London was treated as a "Grand Historical Peristrephic Panorama" by the Marshall brothers.[2] Exotic landscapes and travel were popular themes, particularly trips to India, New Zealand, and the Arctic regions. Banvard's enormous Mississippi River panorama was shown on both sides of the Atlantic and a moving panorama of "Romantic and Picturesque Scenery in the Environs of Hobart Town" taken to London in 1839 allowed people in England to get an impression of Australia.[3] A narrator explained the scenes passing in front of the audience and music played. In the United States, moving panoramas were popular throughout the 1850s and 1860s, with multiple touring shows operated by proprietors such as Edwin Beale, T.K. Treadwell, and George K. Goodwin; among the more popular subjects were the Arctic regions, major cities such as New York, and Niagara Falls.

Peter Grain's Panorama of the Hudson and James Rivers - Scenes in Virginia, painted in oil and watercolor, was exhibited at the San Francisco Hall in San Francisco in March 1853, concluding a tour of cities across the United States. The work covered 9,400 feet of canvas. 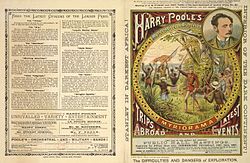 In the early nineteenth century, British traveling panorama shows had been operated by several firms, among them the Marshall brothers of Glasgow and J.B. Laidlaw. However, it was not until the 1850s that a nearly year-round programme of such shows was offered by Moses Gompertz, who with his assistants the Poole brothers traveled the length and breadth of Britain. Gompertz continued in this line of work through the mid-1880s, when his business was taken over by the Pooles. To distinguish theirs from rival shows, they started to use the name Myriorama, and by 1900 they had seven separate shows touring for 40 weeks of the year.[4] They added elaborate effects to the scrolling paint-and-cloth panoramas: cut-out figures moving across the scene, accompanied by music, lighting and sound effects. The narrator, often one of the Poole brothers in evening dress, would describe and interpret. "Poole's Myriorama" was well-known and is even mentioned in James Joyce's Ulysses.

Stories of travel and adventure, often military adventure, were popular: the action was conveyed by hidden stagehands moving shaped flats across a fixed backdrop. One naval battle had them manoeuvring ships accompanied by gunshot noises, puffs of smoke and Rule Britannia with waves on a rippling cloth at the front of the stage.[5] Some shows, with variety acts as well as myriorama displays, employed dozens of people.

Some of the first films seen in the UK were presented in late 19th century myriorama shows.[6] Although cinema eventually replaced the myriorama, this kind of entertainment stayed popular until the late 1920s, and was considered a Christmas-time treat. In December 1912 the Pooles first presented their Loss of the Titanic in "eight tableaux", starting with "a splendid marine effect" of the ship gliding across the scene.[7] A descendant of theirs, Hudson John Powell, gathered together the family story in Poole's Myriorama!: a stmaneuveringory of travelling panorama showmen (2002). The Guardian has called their myrioramas part of the "popular visual culture of the 19th century".[8]

The last of the Poole family who were in the Myriorma business was Joseph Reginald Poole (1882 - 1950). His father Charles William Poole had taken over all the familie's entertainment concerns. In 1937, he published the book One Hundred Years of Showmanship This is available in digitised version from the Bill Douglas Collection, held by Exeter University [9] 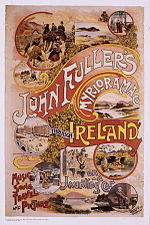 A Myriorama company formed in New Zealand in 1896 by John Fuller (1850–1923) used magic lantern images rather than paintings wound on rollers.[10] Their shows offered a changing display of pictures accompanied by commentary and music.

Few moving panoramas have survived to this day, and conservation issues prevent them from being shown in their original format. The most notable rediscovered moving panorama in the United States is the Grand Moving Panorama of Pilgrim's Progress, which was found in storage at the York Institute, now the Saco Museum, in Saco, Maine by its former curator Tom Hardiman. It was found to incorporate designs by many of the leading painters of its day, including Jasper Francis Cropsey, Frederic Edwin Church, and Henry Courtney Selous (Selous was the in-house painter for the original Barker panorama in London for many years). Another significant panorama, Russell and Purrington's "Whaling Voyage 'Round the World," is in the collection of the New Bedford Whaling Museum, although it was recently taken off display following renovations. C.C.A. Christiansen's "Mormon Panorama" survives at Brigham Young University's Museum of Art, where it has been the subject of several recent shows and lectures.

Another moving panorama was donated to the Anne S. K. Brown Military Collection at Brown University Library in 2005. Painted in Nottingham, England around 1860 by John James Story (d. 1900), it depicts the life and career of the great Italian patriot, Giuseppe Garibaldi (1807–1882). The panorama stands about 4½ feet high and approximately 140 feet (43 m) long, painted on both sides in watercolor. Numerous battles and other dramatic events in his life are depicted in 42 scenes, and the original narration written in ink survives.