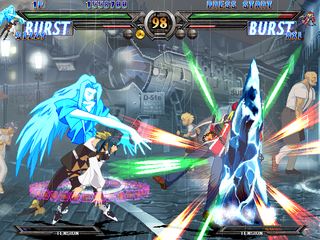 The Guilty Gear series is known for its unique graphics.(screenshot from Guilty Gear XX #Reload)

The first game in the series, Guilty Gear was released on the PlayStation in 1998. The original Guilty Gear was difficult and its heavy metal aesthetics were unique to the 2D fighting game genre, providing a stark contrast to predecessors such as Darkstalkers and Groove on Fight. In keeping with the looks, the music in this game featured mostly hard rock and heavy metal tracks (generally uncommon for background music in fighting games). Guilty Gear gained some praise from the mainstream video game press such as GameSpot,[1] although it didn't make much of an impact on the video game market, instead becoming something of a cult hit. There is a mobile phone port of this game called Guilty Gear Club.

Guilty Gear's popularity in Japan has brought forth considerable amounts of merchandise. In 2001, Arc System Works and Sony Music released drama CD's that fleshed out the game's story in more detail. These drama CDs included narration and voice acting done by the same voice actors from the game. Artwork books were also released, containing production artwork and unseen art drawn by Daisuke Ishiwatari.

In 2002, Guilty Gear XX (also known as Guilty Gear X2 in North America) was released. This title furthered the individual stories of each character and improved the combo system. This was soon followed by Guilty Gear XX #Reload (pronounced "Sharp Reload"), which addressed a number of gameplay imbalances in XX and changed both the tiers and the distance between the characters, added a new character legal for use in tournaments, and brought the series online for the first time with Xbox Live. The Guilty Gear XX title has had the most revisions with 4 other titles, Guilty Gear XX Accent Core Plus (2008) being the most recent.

In 2004, Guilty Gear Isuka ("Isuka" meaning crossbill in Japanese, and representing the way two swords clash) was released, featuring up to four-player simultaneous gameplay, a side-scrolling mode called "Boost Mode", a customizable version of one of the characters, a new playable character, and various other additions. This title did not bear an XX in its name, making this an original Guilty Gear game, not a revision.

In 2009, Arc System Works released Guilty Gear 2: Overture for the Xbox 360, which breaks away from the fighting game genre as it plays like a hybrid between a real time strategy game and an action game.

As a result of losing the rights of the series to Sega [2], Arc System Works developed BlazBlue: Calamity Trigger, the first game of the BlazBlue series as a spiritual successor and a "reboot" of the series. Many of the characters, themes and the gameplay elements of the game parallel those found in Guilty Gear series. In May 2011, Arc System Works regained the rights to Guilty Gear.[3] and released Pro Jumper! Guilty Gear Tangent!? in June of that same year.

The Guilty Gear series takes place around the year 2180, in a chaotic, mystical future world. In 2010, mankind discovered an unlimited energy source of incredible power, which was labeled Magic. Despite providing a solution for world energy crisis, wars continued. The power of Magic was combined with humans and other creatures creating living weapons known as Gears. Eventually the Gears turned on the human race, beginning a century-long global war known as the Crusades where the Sacred Order of Holy Knights (Seikishidan being the Japanese name), defeated Justice, leader of the Gears. Justice having been locked away in a dimensional prison, all other Gears seemingly ceased to function, bringing end to an age of conflict.

Five years after the war's end a Gear called Testament planned to free the leader Justice. In response the United Nations heralded a tournament of fighters capable of defeating the resurgent enemies Testament and Justice. Ultimately, a bounty hunter named Sol Badguy defeated Justice, giving way to another uneasy peace.

Less than a year later reports of a newly discovered commander Gear surfaced. Fearing the dawn of another war, the United Nations held a tournament, offering 500,000 World Dollars for the destruction of the Gear.

The Gear was a girl named Dizzy, who, while very powerful, lacked a desire for war and unnecessary destruction. She was defeated, but her life was spared by Sol Badguy. Soon, though, she was found by Ky Kiske, the charismatic police chief of the United Nations and ex-chief of the Sacred Order of Holy Knights. He entrusted her care to Johnny and May, the leader of the Jellyfish air pirates, who welcomed her as one of their own. Jam Kuradoberi, a bounty hunter and struggling chef, claimed credit for Dizzy's disappearance so she could collect the reward and finance her restaurant.

In the time following Dizzy's disappearance, the mysterious Post War Administration Bureau began secretly investigating the Gears and fighters from previous tournaments for their own needs and ambitions. Various powers were working in the shadows to gain control of the world, one being the very creator of the Gears, a mysterious figure known only as "That Man". Fighters find themselves in a reality beyond their control, most notably in the manipulative hands of the villainess I-No, who is revealed to be a servant of That Man for reasons yet unknown.

A week has passed without any word from the small Eastern European kingdom of Villtania. However, as refugees are found, the United Nations becomes aware of devastation and ungodly experiments conducted by Villtania's leading sorcerer and scientist, Raymond. As a result, the United Nations declares an international emergency and promptly offers a reward to anyone who can stop Raymond and bring order back to Villtania. A large gathering of warriors attracted to earning the bounty soon fight to decide who will challenge Raymond.

Set 5 years after Guilty Gear, Humanity created the Gears, biological weapons based on an endless energy called divine power. But one of the Gears went berserk, declared war on humanity, and started a terrible war. In response, mankind formed an order of elite knights, ending the Gears' reign of terror. It seemed that peace had been restored. But true history has yet to reveal itself, until now, in Guilty Gear 2 Overture!

The Guilty Gear series is known for containing numerous rock and metal music references, both in the game's music and in the names of characters, special attacks, and so forth. For example, the character Axl Low is likely named after Axl Rose (bearing a striking resemblance to the Guns n' Roses frontman). Millia Rage was named after speed metal band Meliah Rage and her instant kill attack Iron Maiden is named for the band of the same name. Furthermore, one of her specials is called "Winger" a glam metal band in 1988. In particular, the game includes numerous references to Queen, Guilty Gear creator Daisuke Ishiwatari's favourite band. Ishiwatari originally voiced Sol Badguy [4] (whose real name is Fredderick, à la Queen's late lead singer Freddie Mercury), a leading character in the game whom the manual describes as an avid fan of Queen. The opening guitar riff of I-no's theme is based on the X Japan song "Kurenai". The name "Badguy" is in reference to Freddie Mercury's nickname of Mr. Bad Guy. His theme has the same name as a Queen song. One of Ky Kiske's special moves is called Ride The Lightning, which comes from Metallica's 1984 recording "Ride The Lightning." Ky's Instant kill move is called "Rising Force", which is Yngwie Malmsteen's first album released in 1984. Also, Ky Kiske is a reference to Kai Hansen and Michael Kiske, both ex-vocals from Helloween. Testament shares his name with a the popular thrash metal band Testament and one of Testament's tension attacks is Master of Puppets, named after Metallica's third album. He also has a move called Warrant, another glam metal band (it could also be named after a speed metal band with the same name). I-No plays part of the solo section from "One" as part of one of her victory animations.

The announcer says before each fight "Heaven or Hell", which could be a reference to the Black Sabbath album Heaven and Hell, or to the song by Gamma Ray. Also the character select theme in the Guilty Gear XX series is based on the song Kiss of Judas by Stratovarius.