Nicolás Alejandro Massú Fried (born October 10, 1979, in Viña del Mar, Chile), nicknamed Vampiro (Spanish: "vampire"), is a Chilean tennis player, a former world number nine in singles, and a two-time Olympic gold medalist. He is the only male player to have won both the singles and doubles gold medals in the same Olympic Games in modern (1988 ff.) Olympic tennis.[1]

Massú was introduced to tennis at age five by his Hungarian grandfather, Ladislao Fried. From age 12, he was trained at the Valle Dorado tennis academy, near Villa Alemana, by Leonardo Zuleta, with whom he perfected his forehand and double-handed backhand. He later trained at the Nick Bollettieri academy, in Florida, United States, alongside Marcelo Ríos, and later at the High Performance Center in Barcelona, Spain.

Massú became a professional tennis player in 1997. That year he won the prestigious juniors year-end Orange Bowl tournament. He also claimed the boys doubles competitions at Wimbledon (with Peru's Luis Horna) and the US Open (with countryman Fernando González), and was junior doubles world champion.

In May 2000, Massú reached his first ATP tournament final, at the U.S. Men's Clay Court Championships in Orlando, Florida, where he lost to Fernando González. Later in August, he lost again to another Chilean—Marcelo Ríos—on his US Open debut. In January 2001, Massú reached his second ATP event final, in Adelaide, Australia.

Massú's first ATP title came in February 2002 in Buenos Aires, where he defeated Argentine Agustín Calleri in a three-set final, after being down match point. At the 2003 event, Calleri took revenge and defeated him in the first round, a loss that pushed Massú out of the top 100 in singles and forced him to play challengers once again. In April 2003, he reached the Bermuda challenger final.

Massú claimed his second ATP title in July 2003 in Amersfoort, The Netherlands. The following week he reached the final of the Kitzbühel, Austria tournament, cracking the top 50 in singles for the first time. In September he made three consecutive tournament finals, including a win at a challenger event and his third ATP title at Palermo, Italy. In October, he reached the final at the Madrid Tennis Masters Series tournament, losing to Spaniard Juan Carlos Ferrero in the final. He ended the year at number 12.

In mid-2004, Massú parted ways with Argentine coach Gabriel Markus, whom he replaced with Chilean Patricio Rodríguez. In July 2004 Massú won his fourth ATP title in Kitzbühel, and then went on to win two gold medals at the Athens Olympics in August (see below). Thanks to his outstanding performance at the Olympics, he reached his best ATP Singles Ranking to date, at number 9. In November he underwent groin surgery, and therefore entered the 2005 season off top form. He ended an unremarkable 2005 with a six-match losing streak.

In January 2006, Massú lost his hometown event at Viña del Mar to José Acasuso in the final. In February he won his sixth ATP event at Costa do Sauipe, Brazil. In April he reached the final of the Casablanca event in Morocco. In July he lost to Novak Djokovic in the final of the Amersfoort tournament.

In January 2007, Massú repeated his Viña del Mar showing of 2006, losing to Luis Horna in straight sets. In July he began an eight-match losing streak, ended in October in Saint Petersburg.

Massú had an early exit at the Viña del Mar tournament in January, 2008, losing to Sergio Roitman in the first round. Because he defended points from a final showing in 2007, the following week he fell to number 97 in the world. In July his singles ranking plummeted to #138, his worst since November 1999. Later in the year he won the Florianópolis II challenger event and was finalist in two other tournaments of this level.

Massú began 2009 by not winning a match during his first five tournaments, and losing his opening Davis Cup singles match against Croatia in March. He broke his losing streak at the Indian Wells Masters, beating Argentine Eduardo Schwank in three sets in the first round.

Massú has represented Chile in three Summer Olympics: Sydney 2000, Athens 2004 and Beijing 2008. At the 2000 event's opening ceremony, he was his country's standard bearer, after Marcelo Ríos failed to show up. On his first-round match he beat Slava Doseděl, but lost to Juan Carlos Ferrero in the next round.

The story was different in Athens, where Massú captured both singles and doubles titles. On August 21, he and partner Fernando González, defeated Nicolas Kiefer and Rainer Schüttler of Germany to win the doubles competition, making history by giving Chile its first-ever Olympic gold medal. The following day, he captured his second gold medal by defeating American Mardy Fish in five sets in the men's singles final. Following his victory in singles he was declared as Athlete of the Day by the 2004 Athens Olympics' organization.

"I was so happy because this is my best memory in my sport career. If I look back in 10 more years, I look back on this, I'm gonna be so happy. Now I can die happy."[2]

Because of his low ranking, Massú was granted a wild card to compete in both singles and doubles events in Beijing.[3] He only managed to reach the second round in singles and was ousted on his first match in doubles, where he partnered with Fernando González.

Massú is a veteran of the 2001 Maccabiah Games, the international Jewish Olympics.[5]

Massú has a style characteristic of a clay court specialist, with strong baseline play characterized by a solid forehand and backhand.

Massú is known for his fighting spirit, especially when playing for Chile, as he has demonstrated at the 2004 Olympics and at numerous Davis Cup matches. He has also turned around difficult matches. 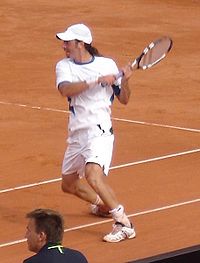 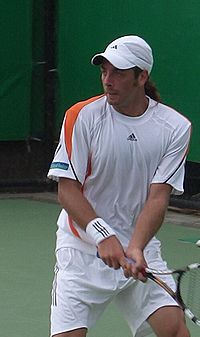 At the 2006 Australian Open