HRH Prince Mohammed Daoud (also spelled Daud) was born at Kabul, the eldest son of the diplomat HRH Prince Mohammed Aziz Khan (1877–1933) (an older half-brother of King Mohammed Nadir Shah). He lost his father to assassination in Berlin in 1933, while his father was serving as the Afghan Ambassador to Germany. He and his brother Naim Khan (1911–78) then came under the tutelage of their uncle HRH Prince Hashim Khan (1884–1953). Daud proved to be an apt student of politics. Educated in France, he served as the Governor of the Eastern Province from 1934–35 and in 1938–39, and was Governor of Kandahar from 1935–38.

He was appointed Prime Minister in September 1953 in an intra-family transfer of power that involved no violence. His ten-year tenure was noted for his foreign policy turn to the Soviet Union, the completion of the Helmand Valley project, which radically improved living conditions in southwestern Afghanistan, and tentative steps towards the emancipation of women.

Daud supported a nationalistic and one-sided reunification of the Pashtun people with Afghanistan, but this would have involved taking a considerable amount of territory from the new nation of Pakistan and was in direct antagonism to an older plan of the 1950s whereby a confederation between the two countries was proposed. The move further worried the non-Pashtun populations of Afghanistan such as the minority Tajik and Uzbek who suspected Daud Khan's intention was to increase the Pashtun's disproportionate hold on political power. During that time, the Pashtuns (or Afghans) consisted roughly 65 - 72 percent of Afghanistan's ethnic demographics but they represented over 80 percent of the government and held all important ministries, such as the Ministries of the Interior, Foreign Affairs, Economic Affairs, Defense and even most of the banks.

With the creation of an independent Pakistan, the Durand line conflict with the British colonialists was inherited by the two countries.

In 1961, as a result of Daoud's antagonistic policies and support to militias in areas along the Durand Line, Pakistan closed its borders with Afghanistan causing an economic crisis and greater dependence on the USSR. The USSR became Afghanistan's principal trading partner. Within a few months, the USSR had sent jet airplanes, tanks, heavy and light artillery for a heavily discounted price tag of $25 million.

In 1962, Daud sent troops across the international border into the Bajaur region of Pakistan in an attempt to manipulate events in that area and to press the Pashtunistan issue, but the Afghan military forces were routed by Pakistani military. During this period the propaganda war from Afghanistan, carried on by radio, was relentless.[4]

The crisis was finally resolved with the forced resignation of Daud Khan in March 1963 and the re-opening of the border in May. Pakistan has continued to remain suspicious of Afghan intentions and Daud's policy has left a negative impression in the eyes of many Tajik tribesmen who felt they were being disenfranchised for the sake of Pashtun Nationalism.

In 1964, King Zahir introduced a new constitution, for the first time excluding all members of the royal family from the council of ministers. Daud had already stepped down. As well as having been prime minister, Daoud had also held the portfolios of Minister of Defence and Minister of Planning until 1963.[5]

President of the Republic 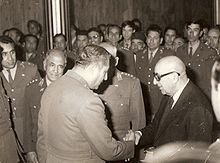 Daud Khan with senior officers of the military of Afghanistan.

On July 17, 1973, Daoud seized power from his cousin (and brother-in-law) King Zahir in a bloodless coup. Departing from tradition, and for the first time in Afghan history, Daoud did not proclaim himself Shah, establishing instead a republic with himself as President.

In 1974, Daoud signed one of two economic packages that would enable Afghanistan to have a far more capable military because of increasing fears of lacking an up-to-date modern army when compared to the militaries of Iran and Pakistan.

Zahir Shah's democratic constitution with elected organs and the separation of powers was replaced by a now largely nominated Loya Jirga. A new constitution backed by a Loya Jirga was promulgated in February 1977, but failed to satisfy all political factions.

In 1976, in a rift with the People's Democratic Party of Afghanistan, Daud sought to increase relations and trade with other Muslim countries and made a tentative agreement with Zulfikar Ali Bhutto on a solution to the Pashtunistan problem. Internally, Daoud attempted to distance himself from the communist elements within the coup. These moves were highly criticized by Moscow, which feared that Afghanistan would soon become closer to the West, especially the United States; the Soviets had always feared that the United States could find a way to influence the government in Kabul.

Daud's army and police suppressed a growing Islamic fundamentalist movement, whose leaders fled to Pakistan. There they were supported by Prime Minister Zulfiqar Ali Bhutto and encouraged to continue the fight against Daud.

A coup against Daud, which may have been planned before he took power, was repressed shortly after his seizure of power. In October 1973, Mohammad Hashim Maiwandwal, a former prime minister and a highly respected former diplomat, died in prison at a time when Parchamis controlled the Ministry of Interior under circumstances corroborating the widespread belief that he had been tortured to death. One of the Army generals arrested under suspicion of this plot with Maiwandwal was Mohammed Asif Safi, who was later released and Daoud Khan personally apologized to him for the arrest.

Daud lessened the country's dependence on the Soviet Union and went to Egypt, India, Saudi Arabia, and Iran for aid. Surprisingly, he did not renew the Pashtunistan agitation; relations with Pakistan improved thanks to interventions from the US and Iran.

The following year, he established his own political party, the National Revolutionary Party, which became the focus of all political activity. In January 1977, a loya jirga approved the constitution establishing a presidential, one-party system of government.

Diplomatic relations with the Soviet Union

President Daud met Leonid Brezhnev on a state visit to Moscow from April 12 to 15, 1977. He had asked for a private meeting with the Soviet leader, to discuss with him the increased pattern of Soviet actions in Afghanistan. In particular the intensified Soviet attempt to unite the two factions of the Afghan communist parties, Parcham and Khalq.

Brezhnev described Afghanistan's non-alignment as important to the USSR and essential to the promotion of peace in Asia, but warned him about the presence of experts from NATO countries stationed in the northern parts of Afghanistan.

In 1977 President Daoud made plans that the Government in Kabul would no longer have any personal relationships with the Soviet Union and try to make Afghanistan closer to the West, especially with other oil rich Middle-East nations. Afghanistan signed a co-operative military treaty with Egypt and by 1977 the Afghan military and police force were being trained by Egyptian Armed forces. This angered the Soviet Union because Egypt took the same route in 1974 and distanced itself from the Soviets.

The April 19, 1978 funeral of Mir Akbar Khyber, the prominent Parchami ideologue who had been murdered, served as a rallying point for the Afghan communists. An estimated 1,000 to 3,000 persons[6] gathered to hear the stirring speeches by PDPA leaders such as Nur Muhammad Taraki, Hafizullah Amin and Babrak Karmal.

Shocked by this demonstration of communist unity, Daoud ordered the arrest of the PDPA leaders, but he reacted too slowly. It took him a week to arrest Taraki, Karmal managed to escape to the USSR, and Amin was merely placed under house arrest. According to PDPA documents, Amin sent complete orders for the coup from his home while it was under armed guard using his family as messengers.

The army had been put on alert on April 26 because of a presumed "anti-Islamic" coup. On April 27, 1978, a coup d'état beginning with troop movements at the military base at Kabul International Airport, gained ground slowly over the next twenty-four hours as rebels battled units loyal to Daud Khan in and around the capital.

Daoud and most of his family were assassinated during a coup by the communist People's Democratic Party of Afghanistan. The coup happened in the presidential palace on 28 April 1978.[7] His death was not publicly announced after the coup. Instead, the new government declared that President Daoud had "resigned for health reasons." (In 1979 Taraki was killed by Amin, who, in turn, was killed by the KGB; Karmal died in 1996 of cancer in Moscow).

On June 28, 2008, the body of President Daoud and those of his family were found in two separate mass graves in the Pul-e-Charkhi area, District 12 of Kabul city. Initial reports indicate that sixteen corpses were in one grave and twelve others were in the second. (Source: Azadi Radio/BBC News). On December 4, 2008, the Afghan Health Ministry announced that the body of Daoud had been identified on the basis of teeth moulds and a small golden Quran found near the body. The Quran was a present he had received from the king of Saudi Arabia.[8] On March 17, 2009 Daoud was given a state funeral.[9]