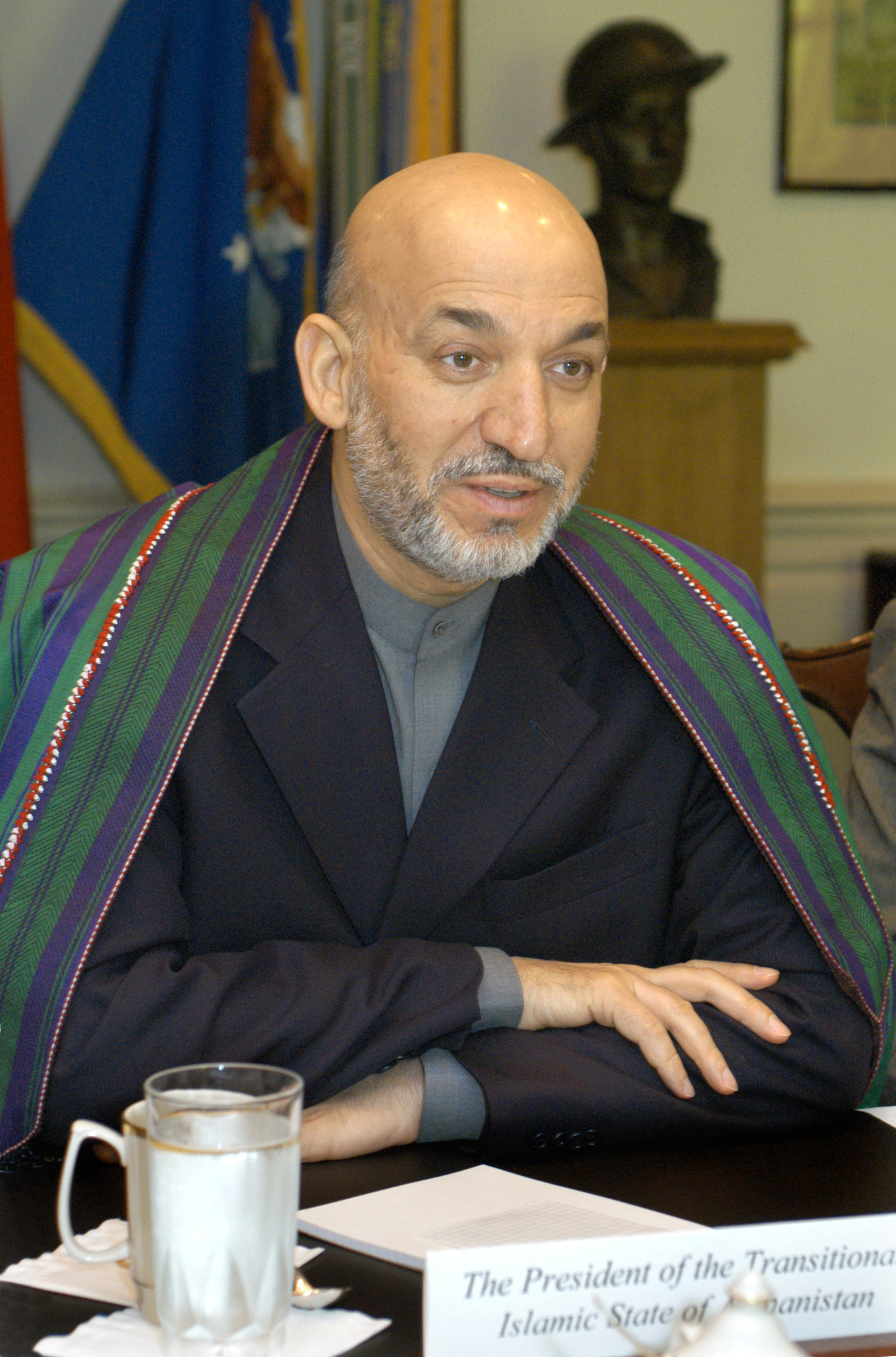 Hamid Karzai ( _ps. حامد کرزي, _fa. حامد کرزي) (born ) is the current , since , . He became a prominent political figure after the removal of the regime in late 2001. From December 2001, Hamid Karzai had been the of the Transitional Administration followed by the Interim President from 2002 until he won the 2004 Presidential election of . Karzai is known for his trademark Karakul hat.

Hamid Karzai, an ethnic Pashtun of the clan of the tribe, was born in , . He comes from a family that were strong supporters of the former king, . He has six brothers and one sister. Karzai is well-versed in several languages, including , Pashto, Persian, , Hindi, English and French.

From 1979 to 1983, Karzai took a postgraduate course in political science at in , , . He then returned to work as a fund-raiser by supporting anti-Soviet in Afghanistan during the Soviet intervention for the rest of the 1980s. After the fall of 's Soviet-backed government in 1992, he served as Deputy Foreign Minister in the government of .

Involvement in the Soviet war in Afghanistan

Karzai was a member of the Mujahideen and took active part in driving the out of Afghanistan during the Soviet invasion in the 1980s. The Mujahideen were secretly supplied and funded by the United States, and Karzai was a top contact for the U.S. Central Intelligence Agency (CIA) at the time. He had close personal contact with CIA Director William Casey and , who was .Fact|date=November 2007 Karzai's brothers immigrated to the U.S. however Hamid Karzai stayed in Afghanistan and Pakistan working for the jihad against the soviet occupation.Fact|date=November 2007

accessdate=2008-02-11|quote=On Aug. 20, 1998, the day the United States sent cruise missiles to kill Osama bin Laden, Karzai told The Post that "there were many wonderful people in the Taliban....So he spent much of the fall offering to negotiate with Taliban chief Mohammad Omar and the vicious warlord Gulbuddin Hekmatyar.] He lived in exile in , in Pakistan where he worked to reinstate the Afghan king, . His father, , was ated, presumably by Taliban agents, on , , and Karzai swore revenge against the Taliban by working to help overthrow them.Fact|date=December 2007 In 2001, Hamid Karzai worked closely with the to help gather support for the anti-Taliban movement.

On , , in an interview with the , Karzai criticizes the role the U.S. played in empowering the Taliban to take control in Afghanistan. He claims he spent many years before the warning embassies about the threat, but the West failed to respond, an act of “neglect, selfishness and short-sightedness." While he highlights the key role the United States and other donors have played in rebuilding and developing Afghanistan, his tone is not without bitterness. Cquote2|It’s just that we could have done all this before September 11th. We could have had these improvements here and the Twin Towers...We could have stopped terrorism before it reached you.| Hamid Karzai

In the months following the in the , loyal to the Northern Alliance and other groups worked with the U.S. military to overthrow the Taliban and muster support for a new government in Afghanistan. In October 2001, Hamid Karzai and his group of fighters survived an American "friendly fire" missile attack in southern Afghanistan. The group received injuries and were treated in the United States, Karzai received injuries to his facial nerves as can be noticed sometimes during his speeches. [ [http://www.time.com/time/asia/2003/journey/afghanistan.html Afghanistan, from the August 18 — August 25, 2003 issue of TIME magazine] ]

In December 2001, political leaders gathered in to agree on new leadership structures. Under the Bonn Agreement they formed an interim Transitional Administration and named Karzai Chairman of a 29-member governing committee. He was sworn-in as leader on . The Loya Jirga of , , appointed Karzai Interim holder of the new position as President of the Afghan Transitional Administration.

After being installed into power Karzai's actual authority outside the capital city of was said to be so limited that he was often derided as the "Mayor of Kabul". Former members of the Northern Alliance remained extremely influential, most notably Vice President , who also served as Defense Minister.

Karzai was a candidate in the , presidential election. He won 21 of the 34 provinces, defeating his 22 opponents and became the first democratically elected leader of Afghanistan.

As incumbent president Karzai held high name recognition among voters, and was admired by his supporters for his steady leadership during an uncertain post-war period. Other contributing factors to his win may have included his endorsement by US President 's administration, the use of US Army transport during his election campaign, the brief one-month campaign season as well as the paucity of news coverage in the country about his opponents. Although his campaigning was limited due to fears of violence, elections passed without significant incident. Following investigation by the UN of alleged voting irregularities, the national election commission on declared Karzai winner, without runoff, with 55.4% of the vote. This represented 4.3 million of the total 8.1 million votes cast. The election took place safely in spite of a surge of insurgent activity.

Karzai was officially sworn in as President of the Islamic Republic of Afghanistan on , at a formal ceremony in Kabul. Many interpreted the ceremony as a symbolically important "new start" for the war-torn nation. Notable guests at the inauguration included the country's former King, , three living former US presidents, and U.S. Vice President .

President of the Islamic Republic of Afghanistan

After winning a democratic mandate in the 2004 election and removing many of the former warlords from his cabinet, it was thought that Karzai would pursue a more aggressively reformist path in 2005. However, Karzai has proved to be more cautious than was expected.

Ever since Karzai's new administration took over in 2004, the has been growing rapidly for the first time in many years. Government revenue is increasing every year, although it is still heavily dependent on foreign aid.

On , Karzai told the that Afghanistan has become the "worst victim" of terrorism. [RFE/RL, [http://www.rferl.org/featuresarticle/2006/09/9d5c90e1-de6e-4def-a053-9ba2f0aa4747.html/ Karzai Says Afghanistan 'Worst Victim' Of Terrorism ] ] Karzai said is "rebounding" in his country, with militants infiltrating the borders to wage attacks on civilians. He stated, "This does not have its seeds alone in Afghanistan. Military action in the country will, therefore, not deliver the shared goal of eliminating terrorism." He demanded assistance from the international community to destroy terrorist sanctuaries inside and outside Afghanistan. "You have to look beyond Afghanistan to the sources of terrorism," he told the UN General Assembly, and "destroy terrorist sanctuaries beyond" the country, dismantle the elaborate networks in the region that recruit, indoctrinate, train, finance, arm, and deploy terrorists. These activities are also robbing thousands of Afghan children of their right to education, and prevent health workers from doing their jobs in Afghanistan. In addition he promised to eliminate opium-poppy cultivation in the country, which helps fuel the ongoing insurgency. He has repeatedly demanded that and U.S.-led coalition forces take more care when conducting military operations in residential areas to avoid civilian casualties, which undermine his government's already weak standing in parts of the country.

In a video broadcast on , 2006, Karzai stated that if the money wasted on the was actually spent on rebuilding Afghanistan, his country would "be in heaven in less than one year".

*, , an attempt was made on Hamid Karzai in Kandahar City. A gunman wearing the uniform of the new opened fire, wounding (former governor of Kandahar) and an American Special Operations officer. The gunman, one of the President's bodyguards, and a bystander who knocked down the gunman were killed when Karzai's American bodyguards returned fire. Recently, some pictures of the U.S. Navy's DEVGRU responding to the attempt have surfaced. Apparently one of their members was wounded. [ [http://media.militaryphotos.net/photos/devgru Militaryphotos.net ] ]

*, , an attempted assassination on Karzai took place when a rocket missed the he was flying in while en route to .

*, , the Taliban attempted to assassinate Karzai in where Karzai was giving a speech to elders. The Taliban fired approximately 12 rockets, some of which landed convert|220|yd|m away from the crowd. Karzai was not hurt in the incident and was transported away from the location after finishing his speech.

Relations with USA, Iran and Pakistan

In a January 2008 interview, Karzai expressed his feelings towards America by stating: "if I am called a puppet because we are grateful to America, then let that be my nickname." [ [http://www.cnn.com/2008/WORLD/europe/01/25/karzai.interview/?iref=mpstoryview Karzai: Terrorists could regain control - CNN.com ] ]

Although the Bush administration in USA often charge that has been meddling in Afghanistan's affairs, Karzai stated that Iran is a "very close friend" of Afghanistan despite accusations of Iranian-made arms being found in Afghanistan. [ [http://pqasb.pqarchiver.com/chicagotribune/access/1282430851.html?dids=1282430851:1282430851&FMT=ABS&FMTS=ABS:FT&type=current&date=Jun+5%2C+2007&author=Peter+Spiegel&pub=Chicago+Tribune&edition=&startpage=12&desc=Karzai%3A+Iran+a+%27very+close+friend%27 Karzai: Iran a 'very close friend'] , ]

In August 2007 Karzai contradicted US assessments on Iran's role in Afghanistan by saying that Iran has been "a helper and a solution." [ [http://blog.washingtonpost.com/the-talk/2007/08/gates_troop_draw_downs_possibl.html?hpid=topnews Gates: Troop draw downs "possible" this year] , ]

In October 2007, Karzai rejected Western accusations against Iran, stating, "We have resisted the negative propaganda launched by foreign states against the Islamic Republic and we stress that aliens' propaganda should not leave a negative impact on the consolidated ties between the two great nations of Iran and Afghanistan."

In late December 2007 Karzai and his delegates went to meet President in , Pakistan, for new trade ties and intelligence sharing between the two countries. [Pajhowk Afghan News, [http://www.pajhwok.com/viewstory.asp?lng=eng&id=47628 Islamabad, Kabul agree on intelligence cooperation] , December 27, 2007.] Karzai also met and had a 45-minute talk with on the morning of , hours before her trip to where she was assassinated after her speech. [Pajhwok Afghan News, [http://www.pajhwok.com/viewstory.asp?lng=eng&id=47687 Bhutto, Karzai meeting proved the first & last one] , December 28, 2007.]

Talks with the Taliban

In April 2007, Karzai acknowledged that he spoke to the about trying to bring peace in Afghanistan.

In September 2007, Karzai again offered talks with the Taliban after a security scare forced him to end a commemoration speech.

Hamid Karzai had associations with the Taliban in the past

Karzai has been the talk of many conspiracy theories over his supposed consultant work for the infamous Union Oil Company of California aka Unocal a now defunct oil company.

* An honorary doctorate in literature from in , his alma mater, on , .
* Honorary British Knight (Knight Grand Cross of the Order of St Michael and St George) in June 2003.