University College School, generally known as UCS, is an Independent school charity situated in Hampstead, north west London, England. The school was founded in 1830 by University College London and inherited many of that institution's progressive and secular views. According to the Good Schools Guide, the school "Achieves impressive exam results with a relaxed atmosphere."[1]

UCS is a member of both the Eton Group of twelve independent schools and the Headmaster's Conference and it maintains links with a number of other schools in north and west London, including South Hampstead High School and Westminster Academy. It also has strong ties with Equatorial College School in Uganda.

The current Headmaster of the school is Kenneth Durham.

A painting of University College School, Frognal, Hampstead in the early twentieth Century

According to H.J.K. Usher (author of An Angel without Wings), giving a detailed history of UCS is close to impossible as many of its early records were lost when the archives of University College London were destroyed during bombing in the Second World War, and because many documents were destroyed or left to rot by a headmaster, C.S. Walton who believed "that tradition began with him".

The following is largely based on the published histories of the School which are given as references at the bottom of the page.

UCS was founded in 1830 by the University of London (the University College London, founded four years earlier). Continuing on the long tradition of dissenting academies, the University of London had been inspired by the work of Jeremy Bentham and others to provide opportunities for higher education for men regardless of religious beliefs (if any) - at the time, only members of the established Church could study at Cambridge and Oxford (the only other two universities in England at the time). Furthermore, the subjects taught at Cambridge and Oxford at the time were very narrow, with classical subjects dominating.

University College found that fewer students were being admitted than had been expected and that the quality of the school education of many of its applicants was inadequate. Several of the founders of UCL therefore took the decision to establish a school.

Several of the founders of the University of London are directly associated with the founding of the school; they include Henry Brougham, 1st Baron Brougham and Vaux (who appears to be singled out as the ring leader in A tradition for Freedom), Lord Auckland (probably George Eden, 1st Earl of Auckland), William Bingham Baring, 2nd Baron Ashburton, Sir Isaac Lyon Goldsmid, Henry Hallam, Leonard Horner (The Royal Society of Edinburgh has described UCS as his 'monument' [1]), James Mill, Viscount Sandon (probably either Dudley Ryder, 1st Earl of Harrowby or Dudley Ryder, 2nd Earl of Harrowby), James Lock, Stephen Lushington D.C.L. M.P., John Smith M.P., and Henry Waymouth.

According to A Tradition for Freedom, further inspiration for the School came from an elderly Jeremy Bentham who had attacked the traditional education he had been given, and Church of England schools in Chrestomathia.

The first headmaster was The Reverend Henry Browne, who quickly caused controversy, by publishing a prospectus for the School which appeared to include some type of communal worship. This was quickly replaced with a new version which also stated that the School would not use corporal punishment (highly unusual at the time).

The School opened at 16 Gower Street (from where the sobriquet 'Old Gower' derives) on November 1, 1830, under the name 'The London University School'. Browne soon resigned from his position and was replaced by John Walker (an assistant Master).

By February 1831 it had outgrown its quarters, in October 1831, the Council of UCL agreed to formally take over the school and it was brought within the walls of the College in 1832, with a joint headmastership of Professors Thomas Hewitt Key and Henry Malden.

The School was very original - it was never a boarding school (though there were at times pupils who boarded in private lodgings or with teachers), it was one of the first schools to teach modern languages, and sciences, and it was one of the first to abolish corporal punishment. It has also been noted that, in fact, UCS had a gymnasium before the school that is generally credited with having the first gym. Originally, there were no compulsory subjects and no rigid form system. Most boys learnt Latin and French, and many learnt German (a highly unusual subject to teach at that time). Mathematics, Chemistry, Classical Greek and English were also taught. There was no religious teaching.

In the mid nineteenth century, the government of Japan sent a number of pupils to the School (see Kikuchi Dairoku and Hayashi Tadasu) which had been recommended on the advice of Edward Stanley, 15th Earl of Derby, who was the British Foreign Secretary at the time.

UCS moved away to new purpose built buildings in Frognal in Hampstead in 1907, which were opened by HM King Edward VII with the Archbishop of Canterbury in attendance on July 27. Kikuchi Dairoku was invited to the first annual prize giving at Frognal where he represented those who had received their prizes at Gower Street.

The Sixth Form Centre, which also houses the Theatre, was opened by the HRH The Duke of Kent in 1974.

In 1980 Her Majesty Queen Elizabeth II visited the school to celebrate its 150th Anniversary and to inaugurate the rebuilt hall which had been destroyed by fire in 1978.

The Sir Roger Bannister Sports Centre was officially opened by Sir Roger (himself an Old Gower) in December 2006. A new Art, Design Technology and Modern Languages building came into use from November 2007 and, in a gesture of respct to one of the School's intellectual founding fathers, was formally opened as the Jeremy Bentham building by The Duke of Gloucester on 22 May 2008. Also in 2008, the Sixth Form Centre was completely renovated along with most of the School's interior and classrooms were renovated. In September 2008, the first intake of girls into the sixth form entered UCS.

The governing Council consists of 20 members.

The Universities of Oxford, Cambridge and London each nominate representatives on the Council, as do University College London, the Worshipful Company of Grocers and the London Borough of Camden.

The Chairman of the Council is currently Sir Brian Leveson.

As policy, UCS does not measure academic success by exam result league tables. However the school is firmly based in the top of the national league tables as shown below;

UCS came 25th of all schools nationally according to The Times. In terms of schools which were for boys only, UCS came 5th. [2].

The Financial Times rated UCS the 17th Best School in England in its September 2008 report [3].

In terms of independent schools for boys, UCS came within the top 10 schools nationally. [5].

The Times ranked UCS as the 45th best School in England for GCSE results 2006. [6]. This ranked the school as 19th in terms of schools where boys can attend. For schools which accept only boys the school was ranked 15th.

The Times 'Parent Power' 2006 Survey ranked UCS 27th in the secondary school category for independent schools.[7]. For boys schools UCS was ranked 10th. It was also wrongly labelled as mixed.

The school's annual Beyond Words' UCS Festival has received press attention in recent years because of the number of celebrities that attend; in 2006, The Times placed the festival at the top of its list of 'Top Cultural Places To Be' that week. The festival has also appeared several times in Time Out magazine, rated as one of London's top cultural attractions of the season. The 2006 festival welcomed many household names including Lord Falconer, Zadie Smith (who, according to reports mentioned that one of the characters in her second book was based on an Old Gower), Matthew Pinsent and Rupert Everett, as well as a multitude of journalists, actors, authors, musicians, economists, and many more. Highlights of the 2007 festival included Sophie Dahl, the ULU Jazz Band, Anton Edelmann and Bombay Bicycle Club. In 2008, University College School again welcomed a wide and varied range of contributors including Raymond Blanc, Imelda Staunton, Hugh Pym, Ben Macintyre, Charlie Higson, Martin Bell, Nabeel Yasin, Daljit Nagra, Anjum Anand, Camila Batmanghelidjh, Derek Landy, Alex Lifschutz, William Eccleshare, Ziauddin Sardar, amongst many others. The Beyond Words Festival now includes pupils from the entire UCS foundation.

A major part of the contemporary school culture is community action, where for about six weeks a year students raise money for various charities (2009 total - £20,000).

The school motto is "Paulatim sed firmiter", roughly translated as "Steadily but surely". The school song is called Paulatim.

Old Gowers (old boys) are entitled to use the post-nominal letters "OG".

The school's colours are maroon and black. On blazers these are in vertical stripes.

There have been numerous songs written about UCS. The film Wondrous Oblivion is thought to have been partly inspired by Paul Morrison's experiences at UCS.[citation needed]

UCS publishes a termly newsletter called The Frognal and a yearly magazine called The Gower; both publications are sent to current and past students for free. The latest editions are available on the school website. A Masonic lodge (the Paulatim Lodge) exists, which former pupils or those with links to the school may join.

The UCS Foundation is composed of three main entities:

The Senior School site is divided into seven buildings:

The Senior School site is located on Frognal, in Hampstead - a suburb of London. The main campus and the Great Hall are noted examples of Edwardian architecture. Inside the hall is a magnificent pipe organ, used for school concerts, professional recordings and other festivities. 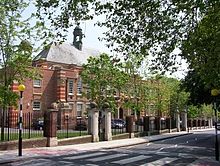 Both the Phoenix School and the JB use the School playing fields as well as the Sir Roger Bannister sports centre at Frognal.

The Senior School is divided into three schools by age, and each year has a unique name:

There are 5 main points of entry for prospective pupils:

Since the acquisition of the Phoenix School, a pupil transfer between the school and the Junior Branch is in place at age 7 for those "displaying academic potential".

Notable Old Gowers include people in the following broad categories:

Vice-Chancellors of the University of London (3), Victoria, Dacca and University of Cambridge (2). Provosts of University College London, a Rector of Imperial College and two Honorary Surgeons to the King. Many fellows of the Royal Society. Several academic OGs have been inducted into the Order of Merit.

A president of the Royal Academy and several members of it, one of the four founders of the BBC, at least one Academy Award winner, film and television stars, broadcasters, musicians, artists, playwrights and composers.

An England Cricketer (and Wisden Cricketer of the Year), a leading Mountaineer and the first man to run the sub 4 minute mile.

Several Archbishops including a Primate of All Canada and Bishops including a General Secretary of the British Council of Churches who also deputised for the Archbishop of Canterbury as chairman of the board of governors of the Church Commissioners.

A CEO of the UK's leading ATM deployer, a Chairman of British Airways, one of the founders of PricewaterhouseCoopers, the founder of Yarrows, a proprietor of the Daily Telegraph.