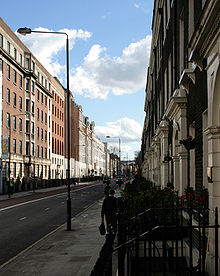 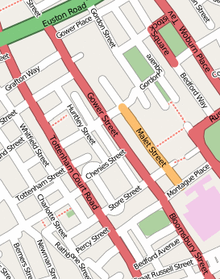 Gower Street is a street in Bloomsbury, Central London, England, running between Euston Road to the north and Montague Place to the south.

University College London (UCL) and the Royal Academy of Dramatic Art are located along Gower Street as is part of University College Hospital. UCL maintains two student residences along the street: the Arthur Tattersall and John Tovell Houses. Of the many UCL buildings along Gower Street, the Cruciform Building is especially notable, both for its striking red exterior and its obvious form, even when viewed from the road.

Euston Square tube station is located at the north end of Gower Street, at the corner of Euston Road.

On 29 December 1838, Charles Darwin took the let of the furnished property at 12 Upper Gower Street (later 110 Gower Street), and wrote to tell his fiancée Emma Wedgwood of his delight at being the "possessor of Macaw Cottage".[1] As their daughter Etty later recalled, "He used to laugh over the ugliness of their house in Gower St, and the furniture in the drawing-room, which he said combined all the colours of the macaw in hideous discord",[2] and Darwin had christened the house "Macaw Cottage" in "allusion to the gaudy colours of the walls and furniture."[3] He moved in on 31 December, and with Emma moved in on the day of their marriage, 29 January 1839. The development of Darwin's theory of natural selection made progress in this house, and their children William Erasmus Darwin and Anne Darwin were born there. In 1842 the family moved to Down House in the countryside, and the Gower Street house became part of the warehouse system of Messrs Schoolbred. On 13 December 1904 a London County Council blue plaque was put up, to "Charles Darwin Naturalist". The house suffered from bomb damage in 1941 during the Blitz, and was not repaired. In 1961 the site became part of the Biological Sciences building of University College London, with a new plaque. The long thin garden which backed on to Gower Mews North (later Malet Place) was incorporated into Foster Court car park in 1978.[4]

The Pre-Raphaelite Brotherhood was founded in the Millais family house on Gower Street in the winter of 1848–49.

From 1976 until 1995 the headquarters of MI5 were an anonymous grey office block at 140 Gower Street, adjacent to the Euston Road.[5][6] The site has since been redeveloped.

185 North Gower Street (not Gower Street) is the filming location for 221b Baker Street, Sherlock Holmes residence in the 2010 BBC adaptation Sherlock.[7]