The Crested Guineafowl (Guttera pucherani) is a member of the Numididae, the guineafowl bird family. It is found in open forest, woodland and forest-savanna mosaics in sub-Saharan Africa. It has a total length of approximately 50 cm (20 in) and weighs 721–1,543 g (1.59–3.40 lb).[2] The plumage is overall blackish with dense white spots. It has a distinctive black crest on the top of its head, the form of which varies from small curly feathers to down depending upon subspecies, and which easily separates it from all other species of guineafowl, except the Plumed Guineafowl. Unfortunately, the names "crested" and "plumed" are often mis-applied across the species. 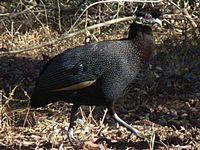 The intraspecific taxonomy of the Crested Guineafowl has been subject to considerable debate, but most recent authorities accept 5 subspecies (e.g. I. Martinez in HBW, 1994). Visual differences between the subspecies, in addition to the form of the crest, are in the colour and position of any patches on the otherwise grey-blue neck and face. Such patches vary from almost white to yellow, to red. The nominate subspecies is found in East Africa from Somalia to Tanzania, and is distinctive with a grey-blue neck and extensive red to the face. It is sometimes considered a monotypic species, the Kenya Crested Guineafowl, in which case the remaining subspecies, which are found in southern, central and west Africa, retain the common name Crested Guineafowl, but under the scientific name Guttera edouardi. They have a bluish face and neck, though the nape is very pale greyish (almost white) in some subspecies and the throat is red in others.

The species is monogamous with probable strong and long-lasting pair bonds. Courtship feeding is common, the author having seen a captive male run 5-10 metres to the hen to present some particular morsel. The nest is a well-hidden scrape in long grass or under a bush; eggs vary from nearly white to buff and a clutch is usually around 4 or 5.

There are five recognized subspecies: