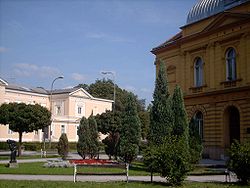 Karlovac is the administrative centre of Karlovac County. The city is located on the Zagreb-Rijeka highway and railway line, 56 km south-west of Zagreb and 130 km from Rijeka.

Karlovac was built from scratch in 1579 in order to strengthen Austria's southern defences against Ottoman encroaches. The establishment of a new city-fortress was a part of the deal between the Protestant nobility of Inner Austria and the archduke Charles II of Austria, in exchange for their religious freedom the nobility agreed to finance the building of a new fortress against the Ottoman Empire. It was founded as a six-pointed star fortress built on the Zrinski estate near the old town of Dubovac at the confluence of the Kupa and Korana rivers. As the city later expanded, the urban area reached as far as the Mrežnica and Dobra rivers. The unique star shape can still be seen around the town. It was originally known as Karlovec, Karlstadt, Carlstadt, or Carlstatt ("Charles's Town" in German), after Archduke Charles II of Austria, upon whose orders construction began on July 13, 1579. The architect of the city was Matija Gambon.

The first church (of the Holy Trinity) was built in the central square in 1580, but all of the city buildings burned down in the fire of 1594. The forces of the Ottoman Empire laid siege to Karlovac seven times, the last time in 1672, but failed to occupy it. The plague epidemic of 1773 was also a notable threat to the city, decimating almost half the population at the time.

As a military outpost of the Habsburg Monarchy, Karlovac was the site of the trial and execution of the best-known leader of the rebel Uskoks from the coastal fort of Senj, Ivan Vlatković. He was executed in Karlovac on 3 July 1612 as an example to his troops who were creating difficulties for the Habsurgs by their piracy against Venetian shipping on the Adriatic Sea, and by marauding raids into the Ottoman hinterland. 1615 their piracy went so far as creating an open war between Venice and Austria. When the Treaty of Madrid was concluded in 1617, bringing an end to the war between Venice and the Habsburgs, under the terms of the treaty the Uskok families were forcibly removed from Senj and disbanded into the hinterland, most notably in the Žumberak hills near Karlovac.

Meanwhile, the fort was becoming too crowded for the city's expanding population and the Military Frontier government could not allow for its further growth. On December 6, 1693 the city received some limited self-government. Queen Maria Theresa, after long insistence from the Croatian Parliament, restored the towns of Karlovac and Rijeka to the Croatian crownland on August 9, 1776. Maria Theresa was also responsible for the founding of Gymnasium Karlovac. King Joseph II reaffirmed it as a free town with an official charter in 1781, allowing the citizens to expand the city and exploit the potential of being at the crossroads of paths from the Pannonian plains to the Adriatic coast. The town blossomed in the 18th and 19th centuries with the development of roads to the seaside and waterways along the Kupa River. After World War II, Yugoslav authorities established the Dubovac internment camp in Karlovac.[1][2][3]

The town's fortunes declined in the 20th century, though it is currently recovering.

Karlovac suffered much damage during the Croatian War of Independence (1991–1995). The southern sections of the city were close to the front lines between the Republic of Croatia and the rebel Serbs, and the neighborhoods of Turanj, Kamensko as well as parts of Mekušje, Mala Švarča and Logorište were devastated by shelling. The city center, the city hall and numerous other buildings were also damaged.

Until the early 2000s, Karlovac's main industry was its beer "Karlovačko", produced by Karlovačka pivovara. In recent years, the rapidly growing firearms manufacturer HS Produkt has become the city's largest private employer. HS Produkt is best known as the designer and manufacturer of the HS2000 pistol, sold in the United States as the Springfield Armory XD.

Croatians know Karlovac as grad parkova (the city of parks) and grad na četiri rijeke (the town on four rivers) for its numerous green areas and four rivers, of which the Mrežnica, the Korana and the Kupa flow through built-up areas, and the Dobra is a few kilometers outside the city centre. A documentary film made by Dušan Vukotić in 1979 on the occasion of the 400th anniversary of the founding of the city plays much on that theme, and shows pictures of happy bathers on the Korana's Fogin beach (Foginovo kupalište) in the city centre.[4]

One of the rarer trees found in the parks is the Ginkgo biloba, which local primary school children are taken out to see as part of their classes on nature and society. Most of the parks are planted in the former trenches dug around the old military fort that were once filled with water as an added layer of protection from the marauding Ottoman armies. One part of the city centre maintains the name of Šanac ('trench') after the old trenches which preserve the old hexagonal form of the historic centre. 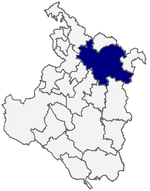 According to the 2001 census, the Karlovac municipality had a total population of 59,395.

Much of the population of Karlovac has changed since the beginning of the 1991-95 Croatian War of Independence, with numerous families of Croatian Serbs leaving and being replaced by people who were themselves displaced from parts of Croatia that were held by rebel Serbs during the war (such as from the town of Slunj), as well as by families of Bosnian Croats who started arriving during the war. The migration outflow was mostly towards Serbia, the Republika Srpska entity in Bosnia and Herzegovina, and to countries of Western Europe, North America and Australia.

The list of settlements included in the administrative area of the city of Karlovac includes:[6]

Karlovac is home to the NK Mostanje Croatian soccer team.

Karlovac is twinned with: