Giant tube worms, Riftia pachyptila, are marine invertebrates in the phylum Annelida[1] (formerly grouped in phylum Pogonophora and Vestimentifera) related to tube worms commonly found in the intertidal and pelagic zones. Riftia pachyptila lives over a mile deep and up to several miles deep on the floor of the Pacific Ocean near black smokers and can tolerate extremely high hydrogen sulfide levels. They can reach a length of 2.4 m (7 ft 10 in). 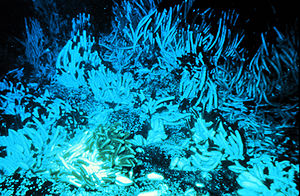 Hydrothermal vent tubeworms get organic compounds from bacteria that live in their trophosome.

They have a highly vascularized, red "plume" at the tip of their free end which is an organ for exchanging compounds with the environment (e.g., H2S, CO2, O2, etc). The tube worm does not have many predators, as few creatures live on the sea bottom at such depths. If threatened, the plume may be retracted into the worm's protective tube. The plume provides essential nutrients to bacteria living inside a specialized organ within its body (i.e., trophosome) as part of a symbiotic relationship. They are remarkable in that they have no digestive tract, but the bacteria (which may make up half of a worm's body weight) turn oxygen, hydrogen sulfide, carbon dioxide, etc. into organic molecules on which their host worms feed. This process, known as chemosynthesis, was first recognized by Colleen Cavanaugh while she was a graduate student.[2]

The bright red color of the plume structures results from several extraordinarily complex hemoglobins found in them, which contain up to 144 globin chains (presumably each including associated heme structures). These tube worm hemoglobins are remarkable for carrying oxygen in the presence of sulfide, without being completely "poisoned" or inhibited by this molecule, as hemoglobins in most other species are.[3][4]

Nitrate and nitrite are toxic but nitrogen is required for biosynthetic processes. The chemosynthetic bacteria within the trophosome are able to convert this nitrate to ammonium ions, which then are available for production of amino acids in the bacteria, which are in turn released to the tube worm. In order to transport nitrate to the bacteria, R. pachyptila are able to concentrate nitrate in their blood to a concentration that is 100 times more concentrated than the surrounding water. The exact mechanism of R. pachyptila’s ability to withstand and concentrate nitrate is still unknown.[5]

With sunlight not available directly as a form of energy, the tubeworms rely on bacteria in their habitat to oxidize hydrogen sulfide,[6] using dissolved oxygen in the water for respiration. They use this reaction for energy in chemosynthesis. For this reason, tube worms are partially dependent on sunlight as an energy source, since they use free oxygen, which has been liberated by photosynthesis in water layers far above, to obtain nutrients. In this way tubeworms are similar to many forms of life which live in the ocean below depths that sunlight can penetrate. However, tubeworms are unique as a large animal, in being able to use bacteria to indirectly obtain all materials they need for growth, from extremely small molecules dissolved in water. Tube worm growth resembles that of hydroponically grown fungi, more than it does that of typical animals which need to "eat".

To reproduce, Riftia pachyptila females release lipid-rich eggs into the surrounding water so they start to float upwards. The males then unleash sperm bundles that swim to meet the eggs. After the eggs have hatched, the larvae swim down to attach themselves to the rock.

Riftia pachyptila has the fastest growth rate of any known marine invertebrate. These organisms have been known to colonize a new site, grow to sexual maturity and increase in length to 4.9 feet (1.5 m) in less than two years.[7] This is in sharp contrast to Lamellibrachia luymesi, the tube worms that live at deep sea cold seeps and grow very slowly for most of their lives. It takes from 170 to 250 years for Lamellibrachia luymesi to grow 2 meters in length, and even longer worms have been discovered.[8]