Age of Empires (often abbreviated to AoE), is a history-based real-time strategy computer game released in 1997. Developed by Ensemble Studios and published by Microsoft, the game uses the Genie, a 2D sprite based game engine. The game allows the user to act as the leader of an ancient civilization by advancing it through four ages, (Stone Age, Tool Age, Bronze Age, and Iron Age) gaining access to new and improved units with each advance.

Originally touted as Civilization meets Warcraft, some reviewers felt that the game failed to live up to these expectations when it was released.[5] Despite this, it received generally good reviews, and an expansion pack, Age of Empires: The Rise of Rome Expansion was released in 1998. Both the original Age of Empires and the expansion pack were later released as "the Gold Edition".

Age of Empires requires the player to develop a civilization from a handful of hunter-gatherers to an expansive Iron Age empire. To assure victory, the player must gather resources in order to pay for new units, buildings and more advanced technology. Resources must also be preserved, as no new resources become available as the game progresses, meaning, if you cut a tree down, the tree will not come back.[6][7]

A major component of the game is the advancement through four ages. These are the Stone Age (Mesolithic/Paleolithic), the Tool Age (Neolithic/Chalcolithic), the Bronze Age and the Iron Age. Advancement between ages is researched at the Town Center, and each advancement brings the player new technologies, weapons, and units.[7][9] 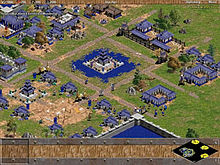 The game features four single-player campaigns in which the player is required to complete specific objectives. Campaigns are a collection of scenarios which are completed in a linear fashion. The campaigns follow the history of the Egyptian, Greek, Babylonian and Yamato civilizations; there's also a complete campaign specially made for the demo version that takes place in the Hittite empire.[10] Aside from the campaigns, there is a game mode called "random map", in which a different map is generated for each new game. Variations of random map, such as the resource-heavy "death match", are also available.[7][11][12]

Age of Empires also facilitated online and network play with up to 8 people simultaneously. Because the network play is less sophisticated than that of modern games, lag and disconnections often occur.[13] Until 19 June 2006, multiplayer gameplay was supported by Microsoft Gaming Zone. At that point, the Zone abandoned support of most CD-ROM games, including Age of Empires and Age of Empires II: The Age of Kings.[14]

The creation of user-made scenarios or series of scenarios (campaigns) for the game was made possible using the Scenario Builder. This tool is simpler and easier to learn than comparable editors used in more modern games, but it has fewer capabilities as a result. Ensemble Studios used the Scenario Builder to make the single-player campaigns which shipped with the retail game. Various unofficial sites exist where custom scenarios can be submitted and downloaded. In late 2005, it was discovered that by modifying various data files, units present in the beta versions of the game could be made available in the editor. Some obscure units include a spaceship and a hero that changes ownership when units move near it. Through data editing, the rules of unit placement can also be modified. This allows units to be placed on any terrain and on top of other units, which creates new possibilities for design. Other significant discoveries include new terrain templates, a mode to treble each unit's hitpoints, and a tool to edit map sizes.[15]

Technology is researched at specific buildings, to which they are generally related; for example, religious research is done in temples and improved armor is researched in the storage pit.[7] Technological advances come in many categories, such as military upgrades (better arms and armor for units), economic upgrades (increasing the efficiency of resource gathering), religious upgrades (faster conversion rates and more abilities for priests) and infrastructure upgrades (stronger fortifications and more resilient buildings). As basic technology research is completed, more advanced technologies may become available. Some technologies are not available to certain civilizations.[7]

Technology plays a very important role in the strategy of the game.[17] As a civilization progresses through the ages, technology becomes more and more expensive, which makes collecting the necessary resources to research them difficult.[17] As a consequence, balancing the workforce of villagers across the various resources can make the difference between victory and defeat.[17] 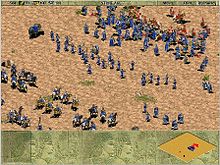 Two armies squaring off, sporting an array of units.

Players control a variety of civilian and military units.[17] Most units can be upgraded through research (e.g. faster gathering for villagers, stronger armor for military units, and longer range for archers).[17]

Land-based units are the most prevalent in gameplay. Villagers are the most basic units in Age of Empires. Their primary function is to collect resources; cutting down trees for wood, mining for stone and gold, and hunting, foraging, farming, or fishing to acquire food.[17] Villagers can also construct buildings and repair both buildings and naval vessels, and are capable of engaging in hand-to-hand combat when necessary. Priests are non-combat units which can heal allied units or "convert" enemy units (in which case the target unit changes allegiance). Infantry units, such as clubmen, swordsmen, and hoplites use melee combat to attack at short range. Mounted units include chariots, cavalry, and war elephants. Archers, mounted or on foot, attack at range. Siege units are of two types: catapults and ballista. Catapults hurl stones which generate blast damage, affecting all units in a small area, and are especially effective against buildings and groups of units. The ballista is less damaging against buildings and units, but it fires faster and is cheaper than the catapult.

Nautical units often play a secondary role, but can be essential to victory. Fishing boats are similar to villagers in that they can gather fish. Merchant ships trade resources from the stockpile and exchange it for gold at another player's dock, with the amount of gold earned being relative to the distance between both docks. Transport ships carry land units from one area of land to another. As well as attacking enemy ships, warships can be very effective in attacking land-based units close to the shoreline (because melee units cannot fight back). Warships come either as galleys which fire arrows or triremes which launch bolts or boulders (very effective against buildings near the shoreline).

Unit types are identical, regardless of civilization (though certain civilizations may have improved variations of these units). So, for example, a Korean Choson broad swordsman is identical to a Persian or Phoenician one, as are bowmen, axemen, short swordsmen, cavalry, and so forth. Some armors and clothes are historically inaccurate, with the long swordsman bearing more resemblance to a Roman praetorian. Some units were also available in the game to civilizations that never, historically, had them; hoplites can be trained by every civilization except Persia, and some middle-Asian civilizations can train legions and centurions, while Japanese Yamato can build triremes.

The four different wonders for each of the four architectural styles.

The Town Center is one of the most important buildings in the game. Here villagers are created, and age advancement is researched.[17] Most scenarios have each player begin with a single Town Center; the ability to build multiple Town Centers is unlocked by the construction of the Government Center during the Bronze Age.[17] The Town Center provides population support for four units. In order to build more units, houses must be constructed. Each house supports four units, and although any number of houses can be built (a concept which was not maintained in later games like Age of Mythology), they can only support a maximum of fifty units.[17]

Military units are produced at specific buildings relevant to their area. All sea units are created at the docks. Walls and towers are defensive fortifications (Age of Empires was one of the first real-time strategy games to include walls strong enough to form a feasible means of defense). Farms are used to produce food. Granaries, storage pits, and the Town Center are used to store resources deposited by the villagers.

Wonders are enormous monuments representing the architectural achievements of the time, such as the Egyptian Pyramids. They require huge amounts of resources to build and are constructed very slowly. Wonders can neither produce units nor conduct research. In scenarios with Standard Victory conditions, a player can win by constructing a wonder and keeping it from being destroyed for 2,000 years (about 10 minutes in the real world). Building a wonder also greatly increases a player's score, which is beneficial in "score" games. Players typically make it their top priority to destroy enemy wonders, especially under Standard Victory conditions. For this reason and because a wonder is relatively easy to destroy, a wonder must be well-guarded at all times.[16]

Age of Empires (under the working title Dawn of Man[18]) was the first game developed by Ensemble Studios. Its historical setting was chosen to be more plausible and accessible, particularly to casual gamers, than existing games.[19] At the time, other real-time strategy games had science fiction and fantasy settings, so the historical setting of Age of Empires enabled it to stand out.[20] The designers received much of their inspiration from the game Civilization, with its proven historical setting; this was noted among reviewers as something positive.[21] Age of Empires was designed by Bruce Shelley,[20] Tony Goodman (in charge of the game's artwork),[22] and Dave Pottinger (in charge of the game's artificial intelligence).[23] Stephen Rippy was the music director (a role he kept through the series), with occasional help from his brother, David Rippy, as well as Kevin McMullan.[24] He created the original music in Age of Empires using sounds from actual instruments from the periods in the game, as well as their digital samples.[25] The tunes were the result of extensive research on the cultures, styles, and instruments used.[25]

Game Revolution categorized the game as "a cross between Civilization 2 and Warcraft II",[6] while GameSpot lamented that it was "a simple combat game rather than a glorious empire-builder", describing it as "Warcraft with a hint of Civilization."[5] While Computer Gaming World's Elliott Chin compared the game extensively to WarCraft II, he said that it has "great depth, and when compared to its real-time brethren, it has to be the most sophisticated of the bunch".[37] GameVortex wanted less of a combat-oriented gameplay, but praised the modes of play, commenting that "the random map generation [...] really keeps the game spiced up."[41] GameSpot decried the level of micromanagement necessary to control the game (which was due to absence of production queues and low AI of the player's units) calling it "a poor idea", which "seriously diminishes AOE's enjoyability."[5] GameVortex echoed this criticism,[41] while PC Gameworld pointed out the subsequently released patches improving some of the faulty AI programming.[42] Elliott Chin criticized the game's population limit, which he thought to be its "most serious grievance".[37]

While noting the similarities with Warcraft II, PC Gameworld praised the uniqueness of each playable civilization, and noted that the "graphics are extremely detailed and have a hand-painted feel to them. It's rare to see a game this beautiful with such detailed unit movements."[42] Game Revolution was impressed by the amount of different units of the game, and noted that the developers "obviously did [their] research here, and the result is a well rounded, historically accurate product (at least for a game)".[6] The soundscape of the game was also criticized, with GameVortex stating that "the oral clues just aren't enough to let you differentiate just what's going on."[41] With a view to the future of the game, Game-Revolution emphasized the scenario editor, which "allows you total control in the design of scenarios and campaigns", a "tool at your disposal to create a scenario exactly to your liking."[6]