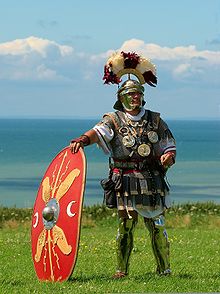 A historical reenactor in Roman centurion costume. Note the transverse crest on the Galea (helmet). It is believed that historically this may have indicated the wearer's rank.

A centurion (Latin: centurio; Greek: κεντυρίων), also hekatontarch (ἑκατόνταρχος) in Greek sources, or, in Byzantine times, kentarch (κένταρχος) was a professional officer of the Roman army after the Marian reforms of 107 BC. Most centurions commanded 83 men despite the commonly assumed 100, but senior centurions commanded cohorts, or took senior staff roles in their legion.

Centuries, or Centuriae, means tribe or company.[1] Theoretically, this word traces its roots to centum which is Latin for one hundred,[1] but that connection is widely disputed or disregarded.[2][3][4] 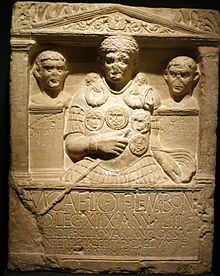 A cenotaph to Marcus Caelius, a centurion of Legio XIIX, killed at the Battle of Teutoburger Wald 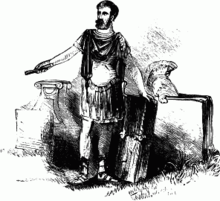 In the Roman infantry, centurions initially commanded a centuria or "century". Centuries, or centuriae, developed from the Roman tribal system under the Servian reforms and could contain 200 to 1000 men. This became 100, at full strength, under the Marian reforms. Later, generals and Caesars further manipulated these numbers with double and half-strength units. Gaius Julius Caesar, for instance, made the first century double strength.

During the Imperial era, centurions gradually rose in seniority in their cohort, commanding centuries with higher precedence, until commanding the senior century and therefore the whole cohort. The very best centurions were then promoted to become centurions in the First Cohort, called Primi Ordines, commanding one of the ten centuries and also taking on a staff role. The most senior centurion of the legion was the Primus Pilus who commanded the first century. All centurions, however senior, had their own allocated century.

The Primus Pilus was so called because his own century was the first file (primus pilus) of the first (rightmost) cohort. Only eight officers in a fully officered legion outranked the Primus Pilus: The legate (legatus legionis), commanding the legion; the senior tribune (tribunus laticlavus), second-in-command of the legion; the Camp Prefect (praefectus castrorum); and the five other tribunes (tribuni angusticlavii) who apparently served as senior staff officers to the legate with a rank roughly equivalent to a modern colonel.

Comparisons between the centurion grades and modern officer ranks can lead to many incorrect assumptions. Centurions could be elected, appointed by the Senate, or promoted "from the ranks" for a variety of reasons.[4] Julius Caesar is said to have promoted his centurions for displays of valor. Other historians cite examples of them being the first over the enemies' wall or through the breach. If this case were strictly so, then there would be a lack of centurions in peacetime garrisons, which is where the Roman Army mostly spent its time.[3] Nonetheless, although not directly comparable to modern ranks, the various centurion grades may be loosely compared to modern junior and middle officer grades.[5][6]

Centurions often suffered heavy casualties in battle, generally fighting alongside the legionaries they commanded. They usually led from the front, occupying a position at the front right of the century formation. They led and inspired their men by example. They also sought to display the skill and courage that may have brought them to their rank in the first place. It is for these reasons that they often suffered a disproportionate number of casualties.

Being held personally responsible for the training and discipline of the legionaries under their command, centurions had a well-deserved reputation for dealing out harsh punishment. In The Annals, Tacitus tells the story of one known as 'Cedo Alteram' - which roughly translates to 'Gimme Another': "The mutinous soldiers thrust out the tribunes and the camp-prefect; they plundered the baggage of the fugitives, and then killed a centurion, Lucilius, to whom, with soldier's humour, they had given the nickname 'Gimme Another', because when he had broken one vine-stick across a soldier's back, he would call in a loud voice for another... and another."

The vine-stick mentioned above by Tacitus was called a "vitis", it was a symbol of the centurions authority and the implement by which they would mete out punishment.

The precedence during the times of manipular legion commanded sixty men and were organized like this:

For the imperial legion they were organized (in order of who advanced first);

There were five centuries in the first cohort, each century with two times the number of soldiers of a normal century. All first cohort centurions outranked all centurions from other cohorts.

Vegetius about the qualities necessary for the centurion

Centurions had to be literate, have connections (letters of recommendation), be at least 30 years of age, and had already served a few years in the military.

The centurion in the infantry is chosen for his size, strength and dexterity in throwing his missile weapons and for his skill in the use of his sword and shield; in short for his expertness in all the exercises. He is to be vigilant, temperate, active and readier to execute the orders he receives than to talk; Strict in exercising and keeping up proper discipline among his soldiers, in obliging them to appear clean and well-dressed and to have their arms constantly rubbed and bright. (Vegetius. De Re Militari,[7] II, 14 )