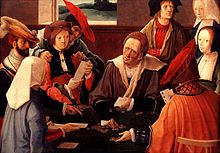 A multiplayer game is a game which is played by several players.[1] The players might be independent opponents, formed into teams or be just a single team pitted against the game. Games with many independent players are difficult to analyse formally in a game-theoretical way as the players may form coalitions.[2]

John Nash proved that games with several players have a stable solution provided that coalitions between players are not allowed. He won the Nobel prize for economics for this important result which extended von Neumann's theory of zero-sum games. Such a stable strategy is called a Nash equilibrium.[3]

If cooperation between players is allowed, then the game is more complex. Many concepts have been developed to analyze such games. While these have had some partial success in the fields of economics, politics and conflict, no good general theory has yet been developed.[3]

In quantum game theory, it has been found that the introduction of quantum information into multiplayer games allows a new type of equilibrium strategy which is not found in traditional games. The entanglement of players's choices can have the effect of a contract by preventing players from profiting from betrayal.[4]

Examples of the types of such games include: