The Qattara Depression (Arabic: منخفض القطارة‎ Munḫafaḍ al-Qaṭṭārah) is a depression in the north west of Egypt in the Matruh Governorate and is part of the Libyan Desert. It lies below sea level and is covered with salt pans, sand dunes and salt marches. The region extends between latitudes of 28°35' and 30°25' North and longitudes of 26°20' and 29°02' East.[2] Some twenty kilometres west of the depression lie the oasis of Siwa and Jaghbub in smaller but similar depressions.

The Qattara Depression contains the second lowest point in Africa at −133 metres (−436.4 ft) below sealevel. The lowest being Lake Assal in Djibouti. The depression covers about 19,605 square kilometres (7,570 sq mi), a size comparable to Lake Ontario or twice as big as Lebanon. Due to its size and proximity to the Mediterranean Sea shore it has been studied for its potential to generate hydroelectricity. 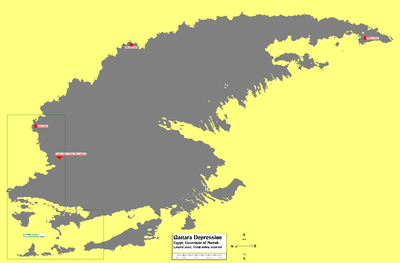 The depression has the form of a teardrop with the point of the drop facing east and the broad deep area facing the south west. The northern side of the depression is characterised by steep escarpments up to 280 meters high, marking the edge of the adjacent El Diffa plateau. To the south however the depression slopes gently up to the Great Sand Sea.

Within the Depression there are salt marshes, under the northwestern and northern escarpment edges, and extensive dry lakes (dry lake beds) that flood occasionally. The marshes occupy approximately 300 square kilometres (120 sq mi), although wind blown sands are encroaching in some areas. About a quarter of the region is occupied by dry lakes composed of hard crust and sticky mud, and occasionally filled with water.

The depression was formed by salt weathering and wind erosion working together. First the salts crumble the depression floor and then the wind blows away the resulting sands.[3]

View of the Qattara Depression

Sand dunes in the Qattara Depression

Groves of Acacia raddiana, growing in shallow sandy depressions, and Phragmites swamps represent the only permanent vegetation. The Acacia groves vary widely in biodiversity and rely on runoff from rainfall and groundwater to survive. The Moghra oasis in the northeast of the Depression has a 4 km² brackish lake and a Phragmites swamp.[4][5]

The south western corner of the depression is part of the Siwa Protected Area which protects the wild oasis in and around the Siwa Oasis.

The Depression is an important habitat for the cheetah, with the largest number of recent sightings being in areas in the northern, western and northwestern part of the Qattara Depression, including the highly isolated, wild oases of Ain EI Qattara and Ein EI Ghazzalat and numerous Acacia groves both inside and outside the depression.[6]

Gazelles (Gazella dorcas and Gazella leptoceros) also inhabit the Qattara Depression, being an important food source for the cheetah. The largest gazelle population exists in the southwestern part of the Qattara Depression within a vast area of wetlands and soft sand. The area of 900 square kilometres (350 sq mi), includes the wild oases of Hatiyat Tabaghbagh and Hatiyat Umm Kitabain, and is a mosaic of lakes, salt marshes, scrubland, wild palm groves and Desmostachya bipinnata grassland.[6]

Barbary sheep (Ammotragus lervia) were once common throughout but now are few in numbers. Extinct species from the area include the Scimitar Oryx (Oryx dammah), Addax (Addax nasomaculatus) and Bubal Hartebeest (Aclelaphus buselaphus).[7]

The climate of the Qattara Depression is highly arid with annual precipitation between 25 to 50 mm on the northern rim to less than 25 mm in the south of the depression. The average daily temperature averages between 36.2 to 6.2 °C (97 to 43 °F) during summer and winter months. The prevailing wind comes from the north varying between north easterly and westerly directions. Wind speeds are maximal in March with of 11.5 m/s and minimal in December with 3.2 m/s.[3] The average wind speed is about 5-6 m/s.[8]

There is one permanent settlement in the Qattara Depression, the Qara Oasis. The oasis is located in the western most part of the depression and is inhabited by about 300 people.[9] The Depression is also inhabited by the nomadic Bedouin people and their flocks, with the uninhabited Moghra oasis being important in times of water scarcity during the dry seasons.

The depression was discovered in 1917 by an officer of the British Army leading a light car patrol into the region. The officer took readings of the height of the terrain with an aneroid barometer on behalf of Dr. Ball who later would also publish on the region. He discovered that the spring Ain EI Qattara lay about 60 metres (200 ft) below sea level. Because the barometer got lost and the readings were so unexpected this find had to be verified. In 1924-25 Dr. Ball once again organised a survey party this time with the sole purpose to triangulate the elevation on a westerly line from Wadi El Natrun. The survey was led by Mr. G.F.Walpole who had already distinguished himself by triangulating the terrain across 500 km from the Nile to Siwa via Bahariya. He confirmed earlier readings and proved the presence of a huge area below sea level with places as deep as -133 m.[2]

Our knowledge about the geology of the Qattara Depression was greatly extended by Ralph Alger Bagnold, a British military commander and explorer, through numerous journeys in the 1920s and 1930s. Most notable being his 1927 journey during which he crossed the depression east to west and visited the oasis of Qara and Siwa. Many of these trips used motor vehicles (Ford Model-Ts) which employed special techniques for driving in desert conditions. These techniques were an important asset of the Long Range Desert Group which Bagnold founded in 1940.[10]

After the discovery of the depression Dr. Ball published the triangulation findings about the region on October 1927 in The Geographical Journal. He also gave the region its name 'Qattara' after the spring Ain EI Qattara where the first readings were took. The name literally means 'dripping' in Arabic. Six years later in 1933 Dr. Ball was the first to publish a proposal for flooding the region to generate hydro power in his article "The Qattara Depression of the Libyan Dessert and the possibility of its utilisation for power-production".[2]

During World War II the depression's presence shaped the 1st and 2nd Battles of El Alamein. It was considered impassable by tanks and most other military vehicles because of features as salt lakes, high cliffs and/or escarpments, and Fech fech (very fine powdered sand). The cliffs in particular acted as an edge of the El Alamein battlefield, which meant the British position could not be outflanked. Both the Axis and Allied forces built their defences in a line from the Mediterranean Sea to the Qattara Depression. These defences became known as the Devil's gardens and are for the most part still there, especially the extensive minefields. No large army units entered the Depression although German Afrika Korps patrols and the British Long Range Desert Group did operate in the area as these small units had considerable experience in desert travel.

The large size of the Qattara Depression and the fact that it falls to a depth of 133 m below mean sea level has led to several proposals to create a massive hydroelectric project in northern Egypt rivalling the Aswan High Dam. The proposals call for a large canal or tunnel being excavated from the Qattara due north of 55 to 80 kilometres (34 to 50 mi) depending on the route chosen to the Mediterranean Sea to bring seawater into the area.[11] Or otherwise a 320 kilometres (200 mi) pipeline north-east to the freshwater Nile River at Rosetta.[12][13] Water would flow into a series of hydro-electric penstocks which would generate electricity by releasing the water at 90 m below sea level. Because the Qattara Depression is in a very hot dry region with very little cloud cover the water released at the −70 metres (−229.7 ft) level would spread out from the release point across the basin and evaporate from solar influx. Because of the evaporation more water can flow into the depression thus forming a constant source of energy. Eventually this would result in a hyper-saline lake or a salt pan as the water evaporates and leaves the salt it contains behind.

Plans to use the Qattara Depression for the generation of electricity date back to 1912 from Berlin geographer Professor Penk.[14] The subject was discussed in more detail by Dr. John Ball in 1927.[15] In 1957 the American Central Intelligence Agency proposed to President Dwight Eisenhower that peace in the Middle East could be achieved by flooding the Qattara Depression. The resulting lagoon, according to the CIA, would have four benefits:[16]

In the seventies and early eighties several proposals to flood the area were made by the Joint Venture Qattara, a group of mainly German companies. They wanted to make use of peaceful nuclear explosions to construct a tunnel as it would drastically reduce construction costs compared to conventional methods. This project proposed to use 213 devices, with yields of 1 to 1.5 megatons detonated at depths of 100 to 500 metres (330 to 1,600 ft). This fit within the Atoms for Peace program proposed by President Dwight Eisenhower in 1953. Because of this frightening solution the Egyptian government turned down the plan.[17] Present day scientists still explore the viability such a project, as a key to resolving economic, population, and ecological stresses in the area.[18] However the project has never been undertaken.