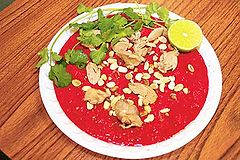 A dish of tiết canh

Tiết canh is a traditional dish of blood and cooked meat in Vietnamese cuisine. The most popular is tiết canh vịt, made from raw duck blood and duck meat. In rarer instances, tiết canh chó, made with dog blood and meat also exists, especially in the northern parts of Vietnam.

The freshly drawn blood is collected in a bowl, and prevented from premature coagulation (hãm huyết), by mixing it with some fish sauce of certain proportions, usually three to five soup spoons of fish sauce for one quart (approximately 1 liter) of blood. Finely chopped meat such as cooked duck innards (such as gizzards) and duck meat are put in a shallow dish along with a sprinkling of crushed peanuts and chopped herbs such as Vietnamese coriander, mint, etc. The blood and fish sauce mixture is then diluted with some watery broth left from cooking the meat and/or gizzards to promote blood coagulation, then quickly poured into the prepared meat dish. After the blood has set, the finished dish resembles a pizza. The finished dish can be kept cooled in the refrigerator, which allows the blood to maintain its coagulated state, when immediate consumption is not called for right away. If the dish is removed from the refrigerator and left to sit at room temperature for a while the blood will return to a liquid state.