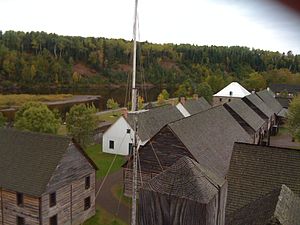 A view of the fort from the lookout post 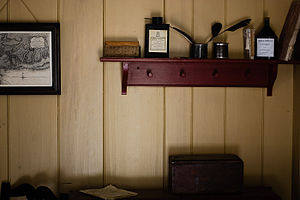 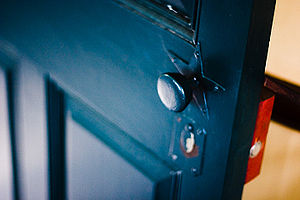 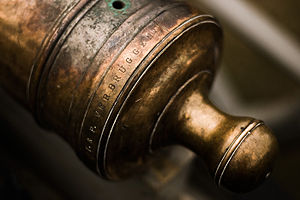 One of the cannons near the main entrance to the park. The inscription reads I. & P. VERBRUGGEN.

Fort William Historical Park (formerly known as Old Fort William) is a Canadian historical site located in Thunder Bay, Ontario, that contains a reconstruction of the Fort William fur trade post as it existed in 1815. It officially opened on July 3, 1973. It was designated a National Historic Site of Canada in 1923.[1]

The North West Company had a major trading post called Fort Charlotte located at Grand Portage, Minnesota. After the rebel colonists' victory in the American Revolutionary War, Britain finally ceded the area to the United States (US) under the Jay Treaty of 1796, to settle the northern border. British/Canadian fur traders wanted to create a new center of operations to avoid US taxes. They moved the trading post north to what became Fort William on the Canadian side of the border.[2]

Historical interpreters represent the many roles and cultures involved in the fur trade, including Scottish fur traders (people of capital), who often took Native American wives and had their families living with them; French Canadian voyageurs and workers, who also had wives from among the Natives; and native hunters and trappers. The native people in the Fort William area are predominantly Ojibwa and are represented accordingly among the interpreters.

The North West Company's "winter partners", fur traders who lived at the post, in the early years married into the upper classes of the native people, strengthening their alliances. There were thus two tiers of society - the fur traders and chiefs and their daughters, and the workers, who formed liaisons or married native women. The descendants of the latter tended to stay in fur trapping and became the Métis ethnic group. While also of mixed heritage, children of fur traders and chief's daughters tended to receive thorough English educations (as well as learning Native culture from their mothers' families) and often moved within the upper classes of Canadian society, including being selected for government posts.

Fort William Historical Park has a working community of skilled tradesmen, including a blacksmith, tinsmith, carpenter, cooper, and birch bark canoe builder. They all craft products according to traditional early 19th-century methods and tools. Many of their crafts are not widely practised elsewhere. Fort William's canoe builder has built birch bark canoes for other Canadian cultural sites, including the Canadian Museum of Civilization.

Fort William Historical Park is located on the banks of the Kaministiquia River at Point de Meuron. This point is a few kilometres upstream from the original fort's site, Fort Kaministiquia, which has been built over as part of the city of Thunder Bay. It also has separate historical significance, as Point de Meuron was named after the mercenary De Meuron soldiers who used the point as a base camp when attacking Fort William in 1816 as directed by the North West Company's rival, the Hudson's Bay Company.

The park is located at the South end of King Road, which runs off of Broadway Avenue two kilometres west of Highway 61.

In 2008 the Fort built an amphitheatre to host a variety of events. It is one Canada's largest purpose-built outdoor entertainment venues.[citation needed] The Amphitheatre is designed to host events with audience sizes up to 50,000. It is configured to be capable of hosting multiple independent events at the same time. The Amphitheatre is a year-round venue, capable of featuring six regulation-size hockey ice surfaces in the winter, and a full-service campground during special events and concerts in the summer.