The Culture of East Germany varied throughout the years due to the political and historical events that took place in the 20th century, especially as a result of Nazism and Communism. A reflection on the history of arts and culture in East Germany reveals complex relationships between artists and the state, between oppositional and conformist art. In a short four decades, East Germany developed a distinct culture and produced works of literature, film, visual arts, music, and theatre of international acclaim. 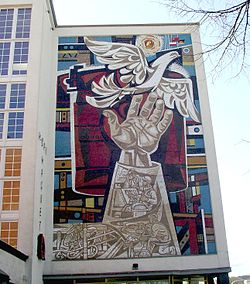 Mosaic by Walter Womacka in Eisenhüttenstadt.

In the 1950s the officially encouraged form of art was known as 'Socialist Realism'. This was intended to depict everyday life under Socialism in a way that showed the benefits of living and working in East Germany.

Rock bands were expected to sing in German only. This seemed a logical constraint by Party leaders but it was somewhat unpopular amongst young people. Another problem for the authorities was having to check song texts very carefully for anti-state tendencies. The band Renft, for example, was prone to political misbehaviour, which eventually led to its breakdown.

The Puhdys and Karat were popular mainstream bands, managing to hint at critical thoughts in their lyrics without being explicit. Like most mainstream acts, they appeared in popular youth magazines such as Neues Leben and Magazin.

Influences from the West were heard everywhere, because TV and radio that came from the Klassenfeind (enemy of the working class) could be received in many parts of the East, too (a notorious exception being Dresden, with its geographically disadvantageous position in the Elbe valley, giving it the nickname of “Valley of the Clueless” despite some Western radio being available). The Western influence led to the formation of more "underground" groups with a decisively western-oriented sound. A few of these bands were Die Skeptiker, as well as Feeling B.

On a more traditional level, the East German government celebrated the fact that Johann Sebastian Bach was born in East German territory, and spent a great deal of money converting his house in Eisenach into a museum of his life, which, among other things, included more than 300 instruments from Bach's life. In 1980 this museum was receiving more than 70,000 visitors annually.

In Leipzig, an enormous archive with recordings of all of Bach's music was compiled, along with many historical documents and letters both to and from him. Werner Neumann founded the Bach-Archiv Leipzig in 1950.

Every other year, school children from across East Germany gathered for a Bach competition held in East Berlin. Every four years an international Bach competition for keyboard and strings was held. 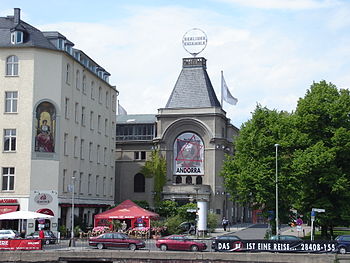 Theater am Schiffbauerdamm, from the Spree river

East German theater was strongly dominated in its early years by Bertolt Brecht, who brought back a lot of artists from the antifascist resistance and reopened Theater am Schiffbauerdamm with his Berliner Ensemble. On the other side some streams tried to establish "Pure Workers Theater", played by workers and performing plays about workers.

After Brecht died, there was a lot of conflict between the artists and the family (around Helene Weigel) about the Brecht heritage. Heinz Kahlau, Slatan Dudow, Erwin Geschonneck, Erwin Strittmatter, Peter Hacks, Benno Besson, Peter Palitzsch and Ekkehard Schall are counted among Brecht's scholars and followers. In the 1950s the Swiss Benno Besson had success with "The Dragon" by Jewgenij Schwarz. As a result he travelled with Deutsches Theater around Europe and Asia (and also in Japan). He became the Intendant at Volksbühne in the 1960s and often worked with Heiner Müller.

Because of censorship, many artists left the GDR from 1975 onwards. A parallel development was that some artists moved out to small city theaters, to create theater beyond Berlin. For example Peter Sodann founded the Neues Theater in Halle/Saale and Frank Castorf worked at a theatre in Anklam. Theater and Cabaret had a very important status for the people in the GDR and it was a very active and dynamic scene. This was the cause of some contention with the state. Benno Besson was quoted as saying about the relationship between cabaret and the state: "At least they took us seriously."

In the GDR the movie industry was very active. Besides folksy movies, the East German movie industry became known worldwide for its productions, especially for its children's movies (Das kalte Herz and cinematic versions of the Grimms' fairy tales, and also modern productions like Das Schulgespenst).

Movies about persecution of Jews in the Third Reich like Jakob, der Lügner and the resistance against fascism Fünf Patronenhülsen, (both directed by Frank Beyer), became internationally famous. Movies about problems of daily life like Die Legende von Paul und Paula (directed by Heiner Carow) or Solo Sunny (directed by Konrad Wolf and Wolfgang Kohlhaase) were also very popular.

Especially remarkable are Red Westerns, in which American Indians often took the role of the displaced people in contrast to American Westerns, in which they are often not mentioned or play the violators. Gojko Mitić is the most famous actor in this role; he often played the righteous, kindhearted and charming Chief (Die Söhne der Großen Bärin directed by Josef Mach). He became an honorary chief of the Sioux nation, when he visited the United States of America in the 90's and the accompanying television crew showed the Sioux one of his movies.

Because of censorship a certain number of very remarkable movies were forbidden at this time. They were only shown after the Wende in 1990. Examples are Traces of Stones (directed by Frank Beyer) and Der geteilte Himmel (directed by Konrad Wolf).

GDR cinemas did not only screen domestic productions. Besides the Czech, Polish, and other Eastern European productions, certain foreign movies were shown as well, although the number was limited due to the cost of purchasing the licences. Movies which represented or glorified a capitalistic ideology were not bought. For example Grease was not shown but One Flew Over the Cuckoo's Nest was. Comedies were popular, such as the Danish Olsen Gang or movies with the French comedian Louis de Funès. 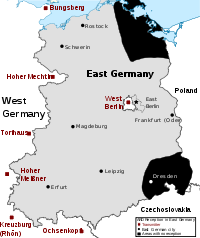 Penetration of West German TV reception (grey) in East Germany for channel ARD. Areas with no reception (black) were jokingly referred to as "Valley of the Clueless" (Tal der Ahnungslosen), while ARD was said to stand for "Außer (except) Rügen und Dresden"

There were two nation-wide state TV stations, DFF1 and DFF2. After the fall of the Iron Curtain, these were gradually merged into the structures of the Federal Republic's public broadcasting system, being followed up by Länder-based regional stations like the MDR and the RBB.

As the arrangement of aerial antennae on roofs differed depending on whether TV-owners watched one of these channels or one from Western Germany[dubious – discuss], especially during the 1950s and '60s, viewers of Western TV were prone to denunciation by patriotic neighbors or FDJ members. However by the 1980s the authorities were largely resigned to the presence of Western broadcasts and even tolerated the existence of communal antennas and cable systems carrying both DFF and Western channels.

The DEFA was one of the largest TV production companies within German language borders and produced an own school of TV- and movie-making, that frequently dared to feature covert criticism of the establishment, thus playing with the fire of censorship. As of today, the DEFA is still famous for own GDR-time productions of high-quality, non-commercialist fairy-tale movies, while maintaining large high-standard infrastructures for producing high-quality German dub versions of movies or other productions from other countries from the Soviet Bloc. Fairy-tale movies from those countries and the GDR were also in high esteem among adults, as they were frequent vehicles for covert criticism of the political and economical elite.

It is especially but not only the material culture of the GDR that receives renewed attention under marketing-focused considerations of what is called Ostalgie (a combination of "Ost" (East) and "Nostalgie" (nostalgia)).

The GDR's economy produced a whole series of consumer goods and associated consumerist practices different from both West German and Soviet bloc cultures. Thus, a consumerist culture developed with (in contrast to the West relatively clear-cut) prestige allocations according to consumerist practices. For example, driving a Trabant meant something entirely different than driving a Wartburg or even a Lada - conclusions about personal conduct of these different types of car owners seemed natural.

Some brands have been revived since the 1990s, as there was notable dissatisfaction among the East Germans with Western consumer goods - the marketing techniques working so well with a population used to Capitalism seemed to fail with them. So "Ostprodukt" (roughly, "East German product") carries a positive-enough connotation for many East Germans, that the marketing industry focused on bringing "reliable", well-known consumer goods back on the shelves in the limits of concentrated rebranding efforts, instead of pushing through their established Western trademarks only.

Sharing some elements with Stalinist grandiosity, GDR architecture blends into the regionally different styles of post-war city-building of the world: Panelák suburbs were more a rule than an exception and there was a heavy reliance on the aesthetics of the atomic age, featuring a tendency against edges and corners as a semi-conscious attempt to do away with rectangular shapes from Nazism, without much devaluating its likenesses in Stalinist architecture.

One buzzword often heard in this context is Socialist Classicism, while the Western reference to the same phenomenon is Stalinist architecture. In GDR its representative building tendencies were sometimes referred to as „stalinistischer Zuckerbäckerstil“ (roughly: "Stalinist Confectioner Style") or „Stalingotik“ (Stalinist Gothic), unofficially.

Notable examples of GDR architecture are / were: 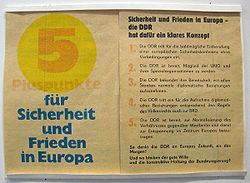 With widespread censorship of literature, the media and the arts, political jokes were one of the main outlets for criticism of the German Democratic Republic (East Germany). After reunification, these became known as DDR-Witze (GDR jokes). Political jokes of this form have almost disappeared since reunification as they no longer play the same subversive role, being replaced by open democratic debate, political cartoons and satire.

The GDR citizens had a special term for referring to some of the more critical jokes as five-year-jokes (i.e., three years prison for the one telling it and two for all who listen and laugh). There is also a morphological reference to "five-year-plan" - in a way, talking about a five-year-joke was a "meta-joke".