Jesus and the woman taken in adultery 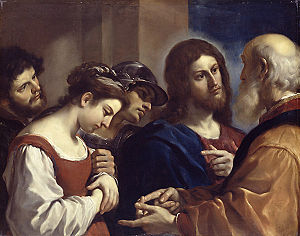 Christ with the Woman Taken in Adultery, by Guercino, 1621 (Dulwich Picture Gallery).

/pəˈrɪkəpiː əˈdʌltəriː/)[1] or Pericope de Adultera is a traditional name for a famous passage (pericope) about Jesus and the woman taken in adultery from verses 7:53-8:11 of the Gospel of John. The passage describes a confrontation between Jesus and the scribes and Pharisees over whether a woman, caught in an act of adultery, ought to be stoned. Jesus shames the crowd into dispersing, and averts the execution.

Although in line with many stories in the Gospels and probably primitive (Didascalia Apostolorum refers to it, possibly Papias also), most scholars[2][3] argue that it was "certainly not part of the original text of St John's Gospel."[4] On the other hand, the Council of Trent declared that the Latin Vulgate was authentic and authoritative.[5] The Latin Vulgate includes the adultery episode in John 7:53-8:11.

The parable, and its messages of not being quick to condemn when one is not blameless and tempering justice with mercy, have endured in Christian thought. Both "he that is without sin, cast the first stone"[6] and "go, and sin no more"[7] have found their way into common usage.

The English idiomatic phrase to "cast the first stone" is derived from this passage.[8] The subject was fairly common in art, especially from the Renaissance onwards; Christ and the Woman Taken in Adultery by Pieter Bruegel is a famous example. There was a medieval tradition, originating in a comment attributed to Ambrose, that the words written were terra terram accusat ("earth accuses earth"), which is shown in some depictions in art, for example the Codex Egberti. There have also been other suggestions as to what was written.[9] To some Christians not concerned with textual disputes, the passage has been taken as confirmation of the literacy of Jesus, otherwise only suggested by implication in the Gospels, but the word "εγραφεν" in 8:8 could mean "draw" as well as "write".

7:53 And every man went unto his own house.
8:1 ¶ Jesus went unto the mount of Olives.
8:2 And early in the morning he came again into the temple, and all the people came unto him; and he sat down, and taught them.
8:3 And the scribes and Pharisees brought unto him a woman taken in adultery; and when they had set her in the midst,
8:4 They say unto him, Master, this woman was taken in adultery, in the very act.
8:5 Now Moses in the law commanded us, that such should be stoned: but what sayest thou?
8:6 This they said, tempting him, that they might have to accuse him. But Jesus stooped down, and with his finger wrote on the ground, as though he heard them not.
8:7 So when they continued asking him, he lifted up himself, and said unto them, He that is without sin among you, let him first cast a stone at her.
8:8 And again he stooped down, and wrote on the ground.
8:9 And they which heard it, being convicted by their own conscience, went out one by one, beginning at the eldest, even unto the last: and Jesus was left alone, and the woman standing in the midst.
8:10 When Jesus had lifted up himself, and saw none but the woman, he said unto her, Woman, where are those thine accusers? hath no man condemned thee?
8:11 She said, No man, Lord. And Jesus said unto her, Neither do I condemn thee: go, and sin no more.

The pericope is not found in any place in any of the earliest surviving Greek Gospel manuscripts; neither in the two 3rd century papyrus witnesses to John - P66 and P75; nor in the 4th century Codex Sinaiticus and Vaticanus, although all four of these manuscripts may acknowledge the existence of the passage via diacritical marks at the spot. The first surviving Greek manuscript to contain the pericope is the Latin/Greek diglot Codex Bezae of the late 4th or early 5th century. It is also the earliest surviving Latin manuscript to contain it; 17 of the 23 Old Latin manuscripts of John 7-8 contain at least part of the Pericope. Papias (circa AD 125) refers to a story of Jesus and a woman "accused of many sins" as being found in the Gospel of the Hebrews, which may well refer to this passage; there is a very certain quotation of the pericope adulterae in the 3rd Century Syriac Didascalia Apostolorum; though without indicating John's Gospel. The Constitutions of the Holy Apostles Book II.24 refers to the passage “And when the elders had set another woman who had sinned before Him, and had left the sentence to Him, and were gone out, our Lord, the Searcher of the hearts, inquiring of her whether the elders had condemned her, and being answered No, He said unto her: “Go thy way therefore, for neither do I condemn thee.” Book II is generally dated to the late third century (Von Drey, Krabbe, Bunsen, Funk).[10] Codex Fuldensis, which is positively dated to AD 546 contains the adulterae pericope. The Second Epistle of Pope Callistus section 6[11] contains a quote that may be from John 8:11 - "Let him see to it that he sin no more, that the sentence of the Gospel may abide in him: “Go, and sin no more.”" However the epistle quotes from eighth century writings and is not thought to be genuine.[12]

Until recently, it was not thought that any Greek Church Father had taken note of the passage before the 12th Century; but in 1941 a large collection of the writings of Didymus the Blind (ca. 313- 398) was discovered in Egypt, including a reference to the pericope adulterae as being found in "several copies"; and it is now considered established that this passage was present in its usual place in some Greek manuscripts known in Alexandria and elsewhere from the 4th Century onwards. In support of this it is noted that the 4th century Codex Vaticanus, which was written in Egypt, marks the end of John chapter 7 with an "umlaut", indicating that an alternative reading was known at this point.

Jerome reports that the pericope adulterae was to be found in its usual place in "many Greek and Latin manuscripts" in Rome and the Latin West in the late 4th Century. This is confirmed by some of Latin Fathers of the 4th and 5th Centuries CE; including Ambrose, and Augustine. The latter claimed that the passage may have been improperly excluded from some manuscripts in order to avoid the impression that Christ had sanctioned adultery:

"Certain persons of little faith, or rather enemies of the true faith, fearing, I suppose, lest their wives should be given impunity in sinning, removed from their manuscripts the Lord's act of forgiveness toward the adulteress, as if he who had said, Sin no more, had granted permission to sin."[13] 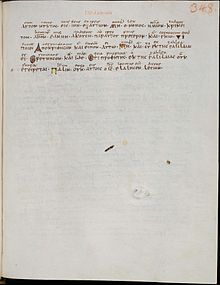 Codex Sangallensis 48 with the blanked space for the pericope John 7:53-8:11

The first to systematically apply the critical marks of the Alexandrian critics was Origen:[14]

"In the Septuagint column [Origen] used the system of diacritical marks which was in use with the Alexandrian critics of Homer, especially Aristarchus, marking with an obelus under different forms, as "./.", called lemniscus, and "/.", called a hypolemniscus, those passages of the Septuagint which had nothing to correspond to in Hebrew, and inserting, chiefly from Theodotion under an asterisk (*), those which were missing in the Septuagint; in both cases a metobelus (Y) marked the end of the notation."

Early textual critics familiar with the use and meaning of these marks in classical Greek works like Homer, interpreted the signs to mean that the section (John 7:53-8:11) was an interpolation and not an original part of the Gospel.

During the 16th Century, Western European scholars – both Catholic and Protestant – sought to recover the most correct Greek text of the New Testament, rather than relying on the Vulgate Latin translation. At this time, it was noticed that a number of early manuscripts containing John's Gospel lacked John 7:53-8:11 inclusive; and also that some manuscripts containing the verses marked them with critical signs, usually a lemniscus or asterisk. It was also noted that, in the lectionary of the Greek church, the set gospel reading for Pentecost runs from John 7:37 to 8:12, but skips over the twelve verses of this pericope.

Beginning with Lachmann (in Germany, 1840), reservations about the pericope became more strongly argued in the modern period, and these opinions were carried into the English world by Samuel Davidson (1848–1851), Tregelles (1862),[15] and others; the argument against the verses being given body and final expression in Hort (1886). Those opposing the authenticity of the verses as part of John are represented in the 20th century by men like Cadbury (1917), Colwell (1935), and Metzger (1971).[16]

According to Henry Alford and Scrivener the passage was added by John in a second edition of the Gospel along with 5:3.4 and the 21st chapter.[citation needed]

On the other hand, many scholars strongly defend the Johannine authorship of these verses, and present opposing arguments and counter-analysis. This group of critics is typified by such scholars as Nolan (1865), and Burgon (1886); and find modern counterparts and apologists in Hoskier (1920), O.T. Fuller (1978), Pickering (1980), Hodges & Farstad (1985), Pierpont, and Robinson (2005).

Almost all modern translations now include the Pericope de Adultera at John 7:53-8:11; but some enclose it in brackets, and/or add a note concerning the oldest and most reliable witnesses. 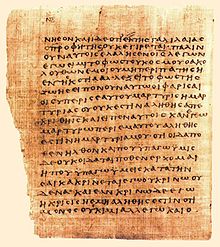 Bishop J.B. Lightfoot wrote that absence of the passage from the earliest manuscripts, combined with the occurrence of stylistic characteristics atypical of John, together implied that the passage was an interpolation. Nevertheless, he considered the story to be authentic history.[17] As a result, based on Eusebius' mention that the writings of Papias contained a story "about a woman falsely accused before the Lord of many sins" (H.E. 3.39), he argued that this section originally was part of Papias' Interpretations of the Sayings of the Lord, and included it in his collection of Papias' fragments. However, Michael W. Holmes has pointed out that it is not certain "that Papias knew the story in precisely this form, inasmuch as it now appears that at least two independent stories about Jesus and a sinful woman circulated among Christians in the first two centuries of the church, so that the traditional form found in many New Testament manuscripts may well represent a conflation of two independent shorter, earlier versions of the incident."[18]

Zane C. Hodges and Arthur L. Farstad argue for Johannine authorship of the pericope.[19] They suggest points of similarity between the pericope's style and the style of the rest of the gospel. They claim that the details of the encounter fit very well into the context of the surrounding verses. They argue that the pericope's appearance in the majority of manuscripts, if not in the oldest ones, is evidence of its authenticity.

Both Novum Testamentum Graece (NA27) and the United Bible Societies (UBS4) provide critical text for the pericope, but mark this off with [[double brackets]], indicating that the pericope is regarded as a later addition to the text.[20] However, UBS4 rates its reconstruction of the wording of the pericope as { A }, meaning "virtually certain" to reflect the original text of the addition.

The pericope was never read as a part of the lesson for Pentecost (John 7:37-8:12), but was reserved for the festivals of such saints as Theodora, September 18, or Pelagia, October 8.[21]

Some of the textual variants