One Rincon Hill is a residential complex on the apex of Rincon Hill in San Francisco, California, United States. The complex, designed by Solomon, Cordwell, Buenz and Associates and developed by Urban West Associates, consists of two skyscrapers that share a common townhouse podium. One tower, One Rincon Hill North Tower, is planned to reach a height 495 feet (151 m) with 45 stories.[A][9] The other tower, One Rincon Hill South Tower, is 60 stories and stands 641 feet (195 m) tall.[A][B] The South Tower contains a number of unique elements, such as high-speed elevators for moving residents effectively, and a large water tank designed to help the skyscraper withstand strong winds and earthquakes. Both skyscrapers and the townhomes contain a total of 709 residential units.

The building site, located right next to the western approach of the San Francisco – Oakland Bay Bridge, formerly contained a clock tower. The clock tower was demolished shortly after the city approved the One Rincon Hill project. Construction of the townhomes and the South Tower lasted from 2005 to 2008, but was stopped for brief periods of time due to seismic concerns and a construction accident. As the South Tower neared completion, it generated controversy concerning blocked views, pricing, and the architectural style of the One Rincon Hill complex.[10] 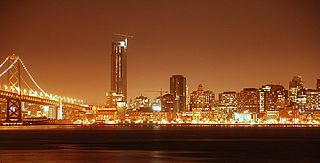 The complex is on a 1.3 acres (0.53 ha) parcel on the apex of the Rincon Hill neighborhood.[11] The site is bounded by Harrison Street to the west, the Fremont Street exit ramp to the north, the approach to the Bay Bridge (Interstate 80) on the east, and the First Street entrance ramp to the south.[12][13]

Solomon, Cordwell, Buenz and Associates, a Chicago architectural firm, designed the complex. The developer of this complex is Urban West Associates, headed by Mike Kriozere.[2] The developer's headquarters are in San Diego, although all its highrise projects over 14 stories are in the San Francisco Bay Area.[14] The Rincon Hill complex is the developer's second project in San Francisco, with the first being ONE Embarcadero South, a residential complex near One Rincon Hill and across from AT&T Park.[15] According to the developer the total cost of the Rincon Hill project was US$290 million, rising to over US$310 million in 2009.[2][16]

The complex consists of two buildings joined together at the base by a row of townhomes. The South Tower and North Tower rise 641 ft (195 m) and 495 ft (151 m) above the corner of Fremont and Harrison streets, respectively.[A][B] The North Tower has 45 floors, while the South Tower has 60.[A][B][9] Because of the sloped Rincon Hill site, the South Tower's lobby floor or the First Street entrance is on the sixth floor, and the first floor is five levels underground from the First Street entrance.[17] The skyscraper is one of the biggest additions to the San Francisco skyline in over 30 years.[3][18] It is also one of the tallest all-residential towers west of the Mississippi River, towering 697 feet (212 m) above San Francisco Bay.[11][19][20]

Both the north tower and the south tower of the Rincon Hill complex bear a resemblance to The Heritage at Millennium Park in Chicago, a building of a similar height to the south tower also designed by Solomon, Cordwell, Buenz and Associates.[21] The architectural style for both buildings of the Rincon Hill complex is late-modernist.[3][9] The three sides of the South Tower facing southeast, northeast, and northwest have a linear glass curtainwall.[3][18] The southwest side is curved and clad in white aluminum panels and glass in a pattern resembling Sharper Image's Ionic Breeze, leading to the nickname "Ionic Breeze Tower".[22] The North Tower has a similar design, except it is shorter and the curved aluminum and glass side faces northeast.[9][18] Both skyscrapers of the Rincon Hill project contain an oval-shaped crown housing mechanical equipment.[23][18][24]

The crown of the South Tower contains a band of 25 LED floodlights that remain lit all night. Each LED light consumes little energy and has a lifetime of 40,000 hours. These lights are used to signal the weather, just like the lights on the John Hancock Tower in Boston. The crown glows red if warmer weather is in the forecast. A blue crown signifies that cold weather is expected soon. Green means that there is at least a 50 percent chance of rain. Amber indicates that the weather will remain unchanged. This is the San Francisco Bay Area's first weather beacon. The crown began lighting up on December 8, 2008.[25]

To support the 60 story condo tower, One Rincon Hill South Tower will have a 12 foot (4 m) thick massive foundation embedded deep into serpentine rock. Although some engineers view serpentine rock with suspicion, there are massive structures, such as the Golden Gate Bridge, that have foundations on rock that is largely serpentine.[26] Rising out of the foundation are the concrete core and large, tall columns of steel-reinforced concrete called outriggers. The core is attached to large outrigger columns by steel-buckling restrained braces that are designed to transfer building loads in an earthquake. These V-shaped restraining braces are said to act like a shock-absorber during earthquakes. The braces are also encased in a concrete and steel casing in order to prevent the braces from buckling and losing their strength. Many of these engineering technologies used in One Rincon Hill South Tower are new to the United States.[26][27]

The South Tower has one freight elevator and three for residents. The elevators are the second fastest in the city of San Francisco, second only to those in 555 California Street and tied with those in 555 Mission Street.[28] The elevators of the South Tower can travel from the first floor to level 61 (the mechanical level) in only 26 seconds to speed passenger traffic flow. This means the elevators can travel about 1,200 vertical feet (366 m) in a minute. The elevators have artificial intelligence control systems that figure out passenger traffic patterns and dispatch the three elevators to handle passenger needs accordingly. The bottom of each elevator shaft has a cylinder filled with hydraulic oil to stop a falling elevator without injuring the passengers inside.[29]

The entire project will provide 695 condos in the highrises and 14 townhomes at the foot of the towers for a total of 709 units.[30] 376 of those condo units are located in the South Tower and the North Tower contains the other 319 units.[2][6] Because of their height, both towers will offer spectacular vistas of the surrounding landscapes.[18] There are 26 different floor plans for the 695 condos which are financially beyond the reach of many citizens residing in San Francisco.[30] The units vary greatly in price from US$500,000 to US$2.5 million[16][31] depending on view and the size of the unit that range from 600 to 2,000 sq ft (56 to 190 m2).[11] The project opened up a sales office on June 16, 2006 and even before the opening, condo-buyers placed deposits for 130 of the South Tower's 376 condo units in a selling spree.[32] The Sales Center is rumored to have cost US$2 million to build.[11] The condo units in One Rincon Hill South Tower sold well for an unfinished building at that time.[31] The first residents began moving into the South Tower in February 2008.[6][33] Sales for the North tower are set to begin in early-2009.[2]

The 183 ft (56 m) triangle-section clock tower, owned by Union 76 and then Bank of America was built on the site circa 1955.[13] In 2003 Urban West Associates bought the land and later proposed the first version of the complex on the same site.[34] The proposal, named 475 First, consisted of a 28 and 33 story residential tower and would have 506 residential units.[34] After the initial proposal the city changed the zoning in Rincon Hill neighborhood and raised height limits.[35] The developer proposed a second (current) version of One Rincon Hill in response to these zoning changes.[36] The second and final version project was approved by the city on August 4, 2005.[37] Before construction of One Rincon Hill, the clock tower was razed to make way for the construction of the towers.[37][38]

About a month after the ceremonial groundbreaking in November 2005, the project was put on hold by San Francisco's Department of Building Inspection and Construction.[37][39] In addition, about a week after the ceremonial groundbreaking, department Chief Engineer Hanson Tom ordered that construction permits cannot be issued without his authorization.[39] This construction hold came about when staff members of the Department of Building Inspection wanted further assurances about the seismic integrity of One Rincon Hill. Their concerns focused on the core-outrigger structural system of One Rincon Hill, which was new to the city of San Francisco.[37] After additional review, San Francisco's city officials agreed with the structural engineers and construction permits were issued in January 2006, although the San Francisco Chronicle reported this over a month later.[37][40][41] 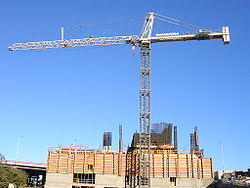 Construction site and tower crane as of July 16, 2006, a few days before the accident.

On July 21, 2006, a metal construction deck collapsed sometime around 10:45 AM (UTC-7). Two carpenters and two ironworkers were injured when they fell about 20 feet (6 m) along with the deck, sending all four men to the hospital. Three of the men were released that afternoon; one of the ironworkers was kept at the hospital with his leg broken in two places, a broken ankle, and a broken shoulder.[42] 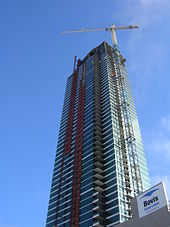 The South Tower is complete, but the townhomes are still under construction.[3][43] The South Tower was completed in September 2008, with all residential floors ready for residents.[44] As of, April 2009, 70% of the South Tower's 376 luxury units and 14 townhouses have been sold. Because of the occupancy rate and low profits so far, the developers had initially refused to pay $5.4 million in development fees that would be spent on rent subsidies, job training programs and community development in the South of Market area. However, the developers finally agreed to pay back the city.[45]

With condo prices set at US500,000 to US$2,000,000, many critics have noted that the One Rincon Hill complex is too expensive for most San Franciscans.[11][30] With the total initial development cost of US$290 million, the average development cost per unit with 709 units total is approximately US$409,000. However, the developer Urban West Associates has contributed a total of US$38.5 million to funds like the South of Market Community Stabilization Fund in order to address this concern.[30] 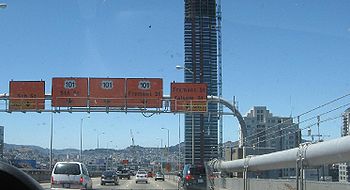 The South Tower obscuring the view of the San Francisco Hills from the Bay Bridge.

], because new building projects in the South of Market district are located on the line of sight between the Bay Bridge and Twin Peaks.[46][47] One Rincon Hill South Tower has obstructed the view of the bridge from Dolores Park and the hillside neighborhoods to its immediate south-southwest. Moreover, the completed structure blocks views of the City's hills once afforded to incoming travelers on the upper deck of the Bay Bridge itself.[47]

A. a b c d e f g This article measures the building height and floor count of both towers from the corner of Fremont and Harrison Streets.
B. a b c d e Building height and number of floors varies depending on the measuring location and whether the five underground levels, the lobby and the topmost two mechanical levels are included in the measurement. Sources like the corresponding SkyscraperPage thread list the tower at 641 feet (195 m) tall with 60 floors, leaving out the topmost two levels. Source. However, the San Francisco project rundown thread on the same site lists the tower at 641 feet (195 m) with only 55 floors, omitting the five underground and topmost two non-residential levels. Source. Emporis lists the building at 605 feet (184 m) and omits the lobby level in addition to the seven nonresidential levels from the floor count, leading to a count of 54 floors. Source. Another site gives no height figure but mentions the tower has 62 levels. Source. At least one San Francisco Chronicle article states the building is 641 feet (195 m) tall with 62 levels, which includes the seven nonresidential levels. Source. However, another Chronicle article uses a different measuring location, stating that the south tower has 605 feet (184 m) and 60 floors. Source.