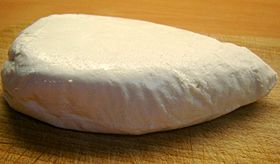 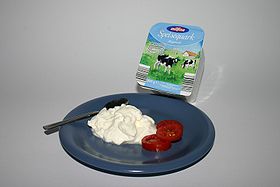 Quark is a type of fresh cheese, also known as tvorog (from the Russian творог), topfen (from the Austrian name), biezpiens (from Latvian), and varškė (from Lithuanian). It is made by warming soured milk until the desired degree of denaturation of milk proteins is met, and then strained. Dictionaries usually translate it as curd cheese or cottage cheese, although most commercial varieties of cottage cheese are made with rennet, whereas traditional quark is not. It is soft, white and unaged, similar to some types of fromage frais. It is distinct from ricotta because ricotta (Italian: recooked) is made from scalded whey. Quark usually has much lower fat content (about the same as yoghurt) than cream cheeses and has no salt added.

In Germany, quark is sold in small plastic tubs and usually comes in two different varieties, Magerquark (lean quark) and Sahnequark (cream quark) with added cream. While the former is often used for baking and as health food, e.g. as a breakfast spread, the latter also forms the basis of a large number of quark desserts. Much like yoghurts in most[citation needed] parts of the world, these treats mostly come with fruit flavouring (Früchtequark, fruit quark), and are often also simply referred to as quark. As the large popularity of quark desserts is limited to mainly the German-speaking countries, confusion might arise when talking about quark with people unfamiliar with the German or Austrian cuisine.

The name comes from the Late Middle High German Quark, which in turn is derived through twarc, quarc, zwarg from the Lower Sorbian Slavic tvarog, (Polish twaróg, Belarusian тварог, Russian творог, and Czech and Slovak tvaroh, which means "curd". In Austria, the name Topfen (pot cheese) is used, and in Hungarian, túró is used. In Flanders, it is called platte kaas (flat cheese), while the Dutch use the name kwark. In Norway and Sweden, it is called kvarg. However, in Sweden it is more commonly known under the product name "Kesella".

In Hungarian it is known as túró, in Finnish it is known as rahka, while in Estonian as kohupiim (foamy milk). The French-language word for it is seré, but it is most commonly called fromage blanc.

Quark is possibly described by Tacitus in his book Germania as lac concretum (thick milk), eaten by Germanic peoples.[1] 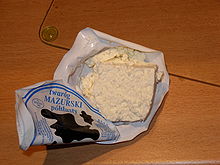 Quark is a member of the acid set cheese group, meaning it is traditionally made without the aid of rennet.[2] In most German dairies today, it is made with rennet.[3] Lactic acid bacteria are added in the form of mesophilic Lactococcus starter cultures.[4][5] Acidification continues until the pH reaches 4.6, which causes precipitation of the casein proteins. In Germany, the curd is continuously stirred to prevent it from getting hard, resulting in a thick, creamy texture. Quark is usually sold in plastic tubs with most or all of the whey. This type of quark has the firmness of sour cream but is slightly drier, resulting in a somewhat crumbly texture (like American ricotta), and contains in its basic form about 0.2 % fat. Quark with higher fat content is made by adding cream, and is often sold flavored with herbs, spices, or fruit. It has a very smooth and creamy texture and is slightly sweet (unlike sour cream).

To make the firmer eastern European version, a small amount of rennet may be added to make the curd firmer. Some or most of the whey is removed to standardize the quark to the desired thickness. Traditionally, this is done by hanging the cheese in loosely woven cotton gauze called cheesecloth and letting the whey drip off, which gives quark its distinctive shape of a wedge with rounded edges. In industrial production, however, cheese is separated from whey in a centrifuge and later formed into blocks. The Polish, Lithuanian and Austrian varieties contain less whey and are therefore drier and more solid than varieties common in other countries. 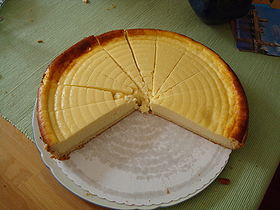 German Käsekuchen made with quark 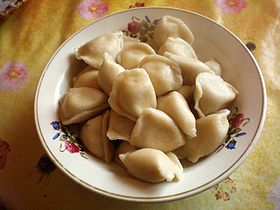 Lithuanian virtiniai are like Russian pelmeni, but with quark filling (particularly).

Quark is often used as an ingredient for sandwiches, salads, and cheesecake, called Käsekuchen or Quarkkuchen in Germany, Quarktorte in Switzerland, Topfenkuchen in Austria, "kwarktaart" in the Netherlands, vatrushka in Russia, tvarohovnik in Czech and Slovak, and sernik in Poland. In these cakes, the quark is typically mixed with eggs, milk or cream, and sugar, and baked.[6][7][8] A firmer variant, called Schichtkäse (layer cheese) is sometimes used for Käsekuchen. Quark flavored with vanilla or fruit is used as a dessert in the Netherlands[9][10][11] and Germany. In German, this is called Quarkdessert. [12] In Poland, twaróg is mixed with mashed potatoes to produce a popular filling for pierogi. In Russia and Russian-speaking countries, quark, known as tvorog (Russian: творог), is highly popular and is bought frequently by almost every family. As a result, tvorog is a member of the official minimal basket of foods.[13] In Russian families, it is especially recommended for growing babies. It could be simply enjoyed with sour cream, or jam, sugar, sugar condensed milk. It is often used as a stuffing in crepes purchased at many fast-food restaurants. It is also commonly used as the base for making Easter cakes. It is mixed with eggs, sugar, raisins and nuts and dried into a solid pyramid-shaped mass. The mass can also be fried, then known as syrnik (served with sweets).

Although common in Europe, manufacturing of quark is rare in the Americas. A few dairies manufacture it, and some specialty retailers carry it.[14][15] Lifeway(Morton Grove, IL ) manufactures a product under the title "farmers cheese" which is available in a variety of metropolitan locations with former Russian populations. Quark is also available at several upstate NY farms.[16] In Canada, quark (firmer East European variety) is manufactured in Quebec by Liberté and may also be available as "baking cheese" or fromage frais.[17]

In India, the Amul co-operative dairy products company sells Shrikhand and labels it as quark.[citation needed]

The Israeli variety, Gvina Levana (white cheese) can be found in most households and is an integral part of the Israeli breakfast (and often, of supper). It has a more neutral and delicate taste, and it contains between 3% and 9% percent fat, 5% and 9% are the most popular. The Russian quark was introduced to Israel during the Aliyah of the 1990s by immigrants from the former Soviet Union, and is now available under the name tvorog.

In Australia, it is sometimes available from supermarkets labelled as quark.