Port Harcourt (Igbo: Diobu,[8][9] Iguocha[10][11] or Ugwuocha;[12][13][14][Note 3] Pidgin: "Po-ta-kot"[2][Note 4]) is the capital of Rivers State, Nigeria. It lies along the Bonny River and is located in the Niger Delta. According to the 2006 Nigerian census Port Harcourt has a population of 1,382,592. The Mayor of Port Harcourt City is Chimbiko Iche Akarolo. From Iguocha Port Harcourt was renamed by Frederick Lugard after Lewis Vernon Harcourt in 1913 who was the Secretary of State for the Colonies.[10][14]

The area that became Port Harcourt in 1913 was originally the farmlands of the Diobu village group of the Ikwerre, a subgroup of the Igbo people.[9] The colonial administration of Nigeria created the port to export coal from the collieries of Enugu located 151 miles (243 km) north of Port Harcourt,[15] which it was linked to by a railway called the Eastern Line, also built by the British.[1][15][16]

Port Harcourt was a site for World War I military operations against German Kamerun; it was once part of the Republic of Biafra which seceded from Nigeria and was dissolved in 1970. Commercial quantities of crude oil was discovered in Oloibiri in 1956 and Port Harcourt's economy turned to petroleum when the first shipment of Nigerian crude oil was exported through the city in 1958. Through the benefits of the Nigerian petroleum industry Port Harcourt was further developed with aspects of modernisation such as overpasses and city blocks.[2] Oil firms that currently have offices in the city include Royal Dutch Shell and Chevron.[17]

Port Harcourt's primary airport is the Port Harcourt International Airport located in the periphery of the city; Nigerian Air Force (NAF) base is the location of the only other airport in the city; used by commercial airlines Aero Contractors and Virgin Nigeria (now Air Nigeria) for domestic flights.[18] The main educational establishment in the city is the University of Port Harcourt.

Port Harcourt was founded in 1913[2] by the British colonial administration of Nigeria[1] beside farmlands called Obumotu, near the cliffs of Iguocha[19] of the Diobu (or Rumurebisi)[14] Ikwerre-Igbo village group consisting seven villages.[9] The purpose of Port Harcourt was to export the coal which geologist Albert Ernest Kitson had discovered in Enugu in 1909.[1][20] The colonial government caused the people of Diobu to cede their land and by 1913 the building of a port-town was started.[8] Other villages that were later absorbed into the city included Oroworukwo, Mkpogua and Rumuomasi;[21][22][23] In the creeks to the south of the original port were the fishing camps and grounds of the Okrika-Ijaw group.[14] Port Harcourt was renamed from Iguocha[10] (from Igbo Ugwu ocha meaning "white cliffs")[12] after Lewis Vernon Harcourt, the Secretary of State for the Colonies by Frederick Lugard, the Governor-General of Nigeria at the time.[24][25] On 18 August 1913 Frederick Lugard wrote to Harcourt;

I have the honour to enclose for your information charts of the estuaries and rivers in the neighbourhood of the proposed port and terminus of the Eastern Railway at Diobu or more correctly Iguocha... In the absence of any convenient local name, I would respectfully ask your permission to call this Port Harcourt, and I anticipate, that, in the future, it will be one of the most important ports in the coast of West Africa...[14]

To this the Secretary of State replied "It gives me pleasure to accede to your suggestion that my name should be associated with the new port."[26] By 1920 Port Harcourt became the second largest port in Nigeria after Lagos.[1][8]

During World War I Port Harcourt was used as a point for military operations against Axis forces in German Kamerun.[2][27] After the discovery of crude oil in Oloibiri in 1956 Port Harcourt exported the first shipload from Nigeria in 1958. Port Harcourt became the centre of the Nigerian oil economy[28] and it subsequently reaped benefits of its associations with the petroleum industry by undergoing modernisation and urbanisation.[2] Port Harcourt's growth is further due to its position as the commercial centre and foremost industrial city of the former Eastern Region; its position in the Niger Delta; and its importance as the centre of social and economic life in Rivers State. A 1973 social survey found that migrants made up 72 percent of Port Harcourt's population. From an area of 15.54 km2 in 1914, Port Harcourt grew uncontrolled to an area of 360 km2 in the 1980s.[4] 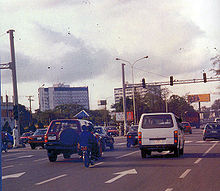 Port Harcourt features a tropical monsoon climate with lengthy and heavy rainy seasons and very short dry seasons. Only the months of December and January truly qualifies as dry season months in the city. The harmattan, which climatically influences many cities in West Africa, is less pronounced in Port Harcourt. Port Harcourt's heaviest precipitation occurs during September with an average of 370 mm of rain. December on average is the driest month of the year, with an average rainfall of 20 mm. Temperatures throughout the year in the city are relatively constant, showing little variation throughout the course of the year. Average temperatures are typically between 25°C-28°C in the city.

The city is a major industrial centre as it has a large number of multinational firms as well as other industrial concerns, particularly business related to the petroleum industry. It is the chief oil-refining city in Nigeria. Rivers State is one of the wealthiest states in Nigeria in terms of gross domestic product and foreign exchange revenue from the oil industry, crude oil being its main export earner. 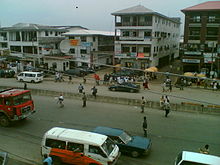 Some of Port Harcourt's more popular and well-known residential areas are Port Harcourt Township (or just 'Town'), GRA (Government Reserved Area) phases 1—5, Rumuomasi, Ogbunabali, Rumuola, Diobu, Amadi Flats, and Borokiri. The main industrial area is located in Trans Amadi. Face-me-I-face-you architecture is quite common to Port Harcourt. The Podium Block of Rivers State Secretariat is an icon of the city. An eighteen storey building, it has the tallest building in the South/South and South/East Geopolitical zones combined. The city has an international airport, Port Harcourt International Airport, two seaports (FOT Onne, Port Harcourt Wharf), two stadiums (Sharks Stadium which is the civic center) and Liberation Stadium located in Elekahia and two refineries. The city plays host to the Rivers State University of Science and Technology; there is also a University of Port Harcourt, which is Located in Obio/Akpor which was carved out of Port Harcourt Local Government Area for ease of administration. The city is sprawling in nature as building codes and zoning regulations are poorly enforced. Land is cleared and 'lean to' buildings constructed sometimes overnight. This adds to flooding and sanitation problems since with no proper drainage or sewer system, parts of the city flood during the very heavy monsoon-type rains that fall for half the year.

In early 2009 the State Government under the leadership of Governor Chibuike Amaechi announced plans for the creation of a new city to be called the Greater Port-Harcourt City. [1] The new city is to be located close to the Port-Harcourt International Airport.[30] The total coverage area for the Greater Port Harcourt city Development is 1900 sq kms spanning 8 local governments in Rivers State including all of PH Local Govt, Ogu Bolo, Eleme, Ikwere, Etche, Obio Akpor,Okrika, Eleme local government areas. The Authority (GPHCDA) was established by law in April 2009 with a mandate to facilitate the implementation of the Greater Port Harcourt master plan and build the new city.

The Greater Port Harcourt city hosted several of the events at the 17th national sports festival tagged 'Garden City games'. The games in 2011 have been confirmed[by whom?] to be the best festival so far hosted by any city.

In recent times, the activities of several armed militant gangs has cast a huge shadow on life and commerce in Port Harcourt. These gangs that for the most part claim to fight for the interest of the indigenous people of Rivers State and the Niger Delta region of Nigeria by asking for a share Nigeria's oil wealth, are however better noted and feared for violent conduct that include random and targeted killings, arson, kidnappings of both foreign workers and indigenous people and bombings. After a spate of violence in 2007, a curfew was imposed on the town, this was however lifted by the Governor of Rivers State in the last days of 2007. On New Year's Eve 2007, Port Harcourt was once again rocked by violence which left at least sixteen people dead. Ateke Tom, the leader of one of the more prominent militias claimed responsibility for most of the fatalities. But now, Port Harcourt has seemingly had some reduction in militancy due to the introduction of the amnesty by the federal Government for the militants.