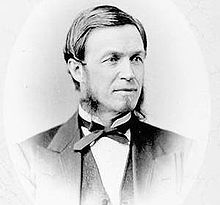 Sir Matthew Crooks Cameron, QC (2 October 1822 – 25 June 1887) was a lawyer, judge and politician in the Canadian province of Ontario.

He was born in Dundas in Upper Canada, during his studies at Upper Canada College, he lost one leg after a shooting accident. Cameron later articled in law, was called to the bar in 1849 and entered practice with William Henry Boulton in Toronto. In 1861, he was elected to the Legislative Assembly of the Province of Canada for North Ontario; he was defeated in 1863 but was elected in an 1864 by-election when the incumbent, William McDougall, was forced to run for reelection after he was named to the executive council. Cameron was opposed to Confederation, preferring a legislative union. In 1867, he ran unsuccessfully in Ontario North in the federal election but was elected for Toronto East to the provincial legislature.

Cameron entered the Cabinet of Premier John Sandfield Macdonald in 1867 as Provincial Secretary and Registrar of Ontario.

In 1871, he became Commissioner of Crown Lands. With the defeat of the Macdonald government in the provincial election that December, Cameron became leader of the Ontario Conservative Party, but stepped down in 1878 to became a judge. In 1887, he was created a Knight Bachelor shortly before his death.