The Law Society of Upper Canada (LSUC) is responsible for the self-regulation of lawyers and paralegals in the Canadian province of Ontario, Canada. Founded in 1797, it is known in French as "Le Barreau du Haut-Canada". The motto of the Society is "Let Right Prevail". 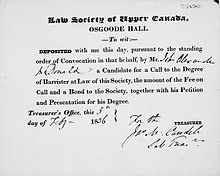 Receipt dated February 5, 1836 for application to the Law Society of Upper Canada issued to John A. Macdonald, the future first Prime Minister of Canada 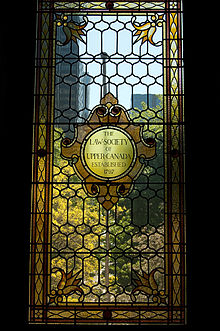 The Law Society of Upper Canada was created almost 20 years before the earliest such association in any other Canadian province or territory. The creation of this self-governing body by an Act of the Legislature was an innovation in the English-speaking world and it became the model for law societies across Canada and the United States. It is one of the oldest Law Societies in the English speaking world.

In 1994, the Law Society affirmed its role by adopting this Role Statement: "The Law Society of Upper Canada exists to govern the legal profession in the public interest by ensuring that the people of Ontario are served by lawyers who meet high standards of learning, competence and professional conduct, and upholding the independence, integrity and honour of the legal profession, for the purpose of advancing the cause of justice and the rule of law."

The Law Society regulates approximately 40,000 lawyers (barristers and solicitors) in Ontario. It is responsible for ensuring that lawyers are both ethical and competent. The Society has the power to set standards for admission into the profession. It is empowered to discipline lawyers who violate those standards. Available sanctions range from admonitions to disbarment. It is based in Toronto, at Osgoode Hall.

Effective May 1, 2007, as a result of amendments to Ontario's Law Society Act, the Law Society regulates approximately 2000 paralegal licensees in Ontario. Paralegals are licensed to provide limited legal services, such as providing representation before provincial tribunals.

Effective March 8, 2008, the benchers of Convocation, who also serve as adjudicators at discipline hearings and corporate directors at Convocation, voted to begin publishing tribunal decisions wherein impugned members successfully defended themselves at hearings. Decisions favouring members made prior to that date remain private and unpublished. No complete registry of matters heard is made available to the bench, bar or public.

The society is headed by a Treasurer. He or she is selected by, and from among, the Benchers, who comprise "Convocation" - in effect, the Society's board of directors as the Society is an Ontario Corporation without share capital. All lawyer-benchers are elected by the Society's members, and eight lay Benchers are appointed by the provincial government. Section 12(2) of the Law Society Act, R.S.O. 1990, provides that Ontario's Attorney General is a Bencher of convocation while Section 13(1) provides that the Attorney General is "Guardian of the Public Interest" and, as such, may require the production of any document or thing possessed by the regulator. The regulator falls under the supervision of the Ministry of the Attorney General, according to the ministry's web site.

The current Treasurer is Laurie Pawlitza. The current CEO of the Society is Malcolm Heins. In 2006, the Law Society had close to 400 staff.

In October 2008, the Law Society was named one of Greater Toronto's Top Employers by Mediacorp Canada Inc., which was announced by the Toronto Star newspaper.[1]