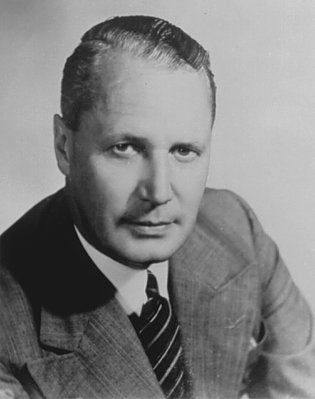 George Alexander Drew, PC, CC, QC (, - , ) was a Canadian conservativepolitician who founded a Progressive Conservative dynasty in that lasted 42 years. He served as the 14th from 1943 to 1948.

George Drew was educated at , graduated from the and studied law at . He served with distinction in as an officer in the Canadian Field Artillery. After the war he became lieutenant-colonel of the 11th Field Brigade and later honorary colonel of the 11th Field Regiment, Royal Canadian Artillery. He was called to the bar in 1920. He married Fiorenza Johnson (1910-), daughter of Edward Johnson, noted opera singer (tenor) and later General Manager (1935-1950) of the in . He remarried and was survived by his second wife at his death.

He was elected of the City of Guelph in 1925 after serving as an alderman. In 1929 he left to become assistant master and then master of the . As a practising lawyer, in 1931, he was appointed Chairman of the . He ran for and won the leadership of the near moribund Conservative Party of Ontario at the 1938 Conservative leadership convention. At this time, the province was in the firm grip of Liberal Premier Mitch Hepburn. Drew entered the in 1939 as the for . In the 1943 provincial election, he was elected in the riding of High Park.

The Liberal government went through a series of crises during due to Hepburn's feud with Prime Minister and the federal Liberals. These crises led to Hepburn's resignation.

In the 1943 provincial election, the Tories, now called the "Progressive Conservatives", won a , narrowly beating the Co-operative Commonwealth Federation (CCF) led by . (Jolliffe and Drew had attended the same high school in Guelph, Ontario, the ).

Drew won by responding to the mood of the times, and running on a relatively left-wing platform, promising such radical reforms as free dental care and universal health care. While his government did not implement much of its promised platform (including Medicare or denticare), it did establish the basis for the Tory regimes that followed by trying to steer a moderate course. Drew's government also introduced the "Drew Regulation" in 1944, which made it compulsory for Ontario schools to provide one hour of religious instruction a week.

Drew was strident in his criticism of the federal government of Mackenzie King, attacking its leadership in the Canadian war effort, chastizing it during the for not instituting full , and accusing it of attempting to centralize power.

The Drew government called an election in 1945 in an attempt to get a . By exploiting increasing tensions, they were able to defeat Jolliffe's CCF by stoking fears about . Jolliffe replied by giving a radio speech (written by ) that accused Drew of running a political in Ontario alleging that a secret department of the was acting as a spying on the opposition and the media.

While the Tories won a majority in the legislature in the 1948 election, Drew himself was defeated in the Toronto riding of High Park by CCFer and temperance crusader Rev. William "Bible Bill" Temple who had targeted Drew over his softening of Ontario's liquor laws.

While it would have been easy enough for Drew to re-enter the legislature by running in a , Drew decided to enter federal politics. "Colonel Drew" (as he liked to be called) won the 1948 federal Progressive Conservative leadership convention, defeating on the first ballot.

Drew then contested a in Carleton in order to win a seat in the House of Commons. The federal (CCF) was determined to defeat him, so they ran as their candidate. Temple was brought up from Toronto to appear at a political meeting with Drew, and accused the Tory leader of being "a tool of the liquor interests" and also made suggestions about Drew's sobriety. Temple's comments so enraged Drew that he had to be restrained from physically attacking his nemesis. However, Drew won the vote and went to Parliament. He ran against Forsey again in the 1949 election, and beat him again.

As leader of the federal Progressive Conservative Party and a , he became Leader of the Opposition.

In the 1949 and 1953 federal elections, Drew's Tories were defeated handily by the Liberals, led by . Drew alienated potential supporters in when he called a "defeated race". His support for conscription during also hurt his prospects among voters. In declining health, Drew resigned as Progressive Conservative leader in 1956, and was succeeded by . From 1957-1964 He served as Canadian High Commissioner to the United Kingdom. In 1967, he was made a Companion of the . He served as the first Chancellor of the from 1965 until 1971.

He was given an Honorary degree by the in 1945. [http://www.utoronto.ca/govcncl/HonoraryDegreeRecipients1850-Present.pdf]

* [http://www.gg.ca/honours/search-recherche/honours-desc.asp?lang=e&TypeID=orc&id=1940 Order of Canada Citation]
* [http://www.parl.gc.ca/information/about/people/key/bio.asp?lang=E&query=2667&s=M Political Biography from the Library of Parliament]
* [http://www.findagrave.com/cgi-bin/fg.cgi?page=gr&GRid=7287307 George Drew at Find a Grave]