The Midway class aircraft carrier was one of the longest lived carrier designs in history. First commissioned in late 1945, the lead ship of the class, USS Midway was not decommissioned until 1992, shortly after service in Operation Desert Storm in 1991.[1]

The CVB-41 class vessels (then unnamed) were originally conceived in 1940 as a design study to determine the effect of including an armored flight deck on a carrier the size of the Essex class. The resulting calculations showed that the effect would be disastrous for air group size. The resulting ship would have a maximum air group of 45, compared to 90–100 for the standard Essex class fleet carriers. As a result, the concept went to finding a larger carrier which could support both deck armor and a sufficiently large air group. Unlike the Royal Navy's aircraft carriers, for which the armored deck was part of the ship structure, the Midway class retained their "strength deck" at the hangar deck level and the armored flight deck was part of the superstructure. The weight-savings needed to armor the flight deck was acquired by removing a planned cruiser-caliber battery of 8-inch (203 mm) guns and reducing the 5-inch antiaircraft battery from dual to single mounts. They would be the last USN carriers to be so designed; the size of the Forrestal class supercarriers would require the strength deck to be located at flight deck level.

The resulting carriers were very large, with the ability to accommodate more planes than any other carrier in the U.S. fleet (30–40 more aircraft than the Essex class). In their original configuration, the Midway class ships had an airwing of almost 130 aircraft. Unfortunately, it was soon realized that so many planes was beyond the effective command and control ability of one ship.

While the resulting ships featured excellent protection and unprecedented airwing size, they also had several undesirable characteristics. Internally, the ships were very cramped and crowded. Freeboard was unusually low for such large carriers. In heavy seas, they shipped large amounts of water (only partially mitigated by the fitting of a hurricane bow during the SCB-110/110A upgrades) and corkscrewed in a manner that hampered landing operations.

None of the class went on war cruises during the Korean War. They were mainly deployed to the Atlantic and Mediterranean. During the 1950s, all three ships underwent the SCB-110 modernization program, which added angled decks, steam catapults, mirror landing systems, and other modifications that allowed them to operate a new breed of large, heavy naval jets.

All three of the Midway class made combat deployments in the Vietnam War. Coral Sea deployed to the Gulf of Tonkin six times, Midway deployed on three occasions, and Franklin D. Roosevelt made one combat deployment before returning to the Mediterranean.

In the late 1960s, Midway underwent a massive modernization and reconstruction program, which proved to be so controversial and expensive that it was not repeated on the other ships. By the 1970s, Franklin D. Roosevelt and Coral Sea were showing their age. All three retained the F-4 Phantom II in their air wings, being too small to operate the new F-14 Tomcat fleet defense fighter or the S-3 Viking anti-submarine jet. In 1977, Franklin D. Roosevelt was decommissioned. On her final deployment, Roosevelt embarked AV-8 Harrier jump jets to test the concept of including VSTOL aircraft in a carrier air wing.

Coral Sea was rescued from imminent decommissioning by the election of Ronald Reagan in 1980. Reagan's proposed 600-ship Navy gave the remaining ships a new lease on life. Coral Sea underwent extensive refits to address the ship's poor condition. When the F/A-18 Hornet became operational in the mid-1980s, the Navy quickly deployed them to the Midway and Coral Sea to replace the older F-4s. A 1986 refit for Midway removed her 6" armor belt and bulged her hull to try to increase freeboard. While successful in this regard, the bulges also resulted in a dangerously fast rolling period that prevented Midway from operating aircraft in heavy seas. The bulging was therefore not repeated on Coral Sea.

The Reagan Era reprieve could not last indefinitely. In 1990, Coral Sea, which had long since earned the nickname "Ageless Warrior", was decommissioned. Midway had one last war in which to participate, and was one of the six aircraft carriers deployed by the U.S. against Iraq during Operation Desert Storm.[2] A few months after the campaign, the last of the class left Navy service.

Coral Sea was slowly scrapped in Baltimore as legal and environmental troubles continually delayed her fate. She is likely to have been the last large warship ever to be scrapped in North America. One decommissioned supercarrier, America, has been sunk in deep water after undergoing destructive battle-damage tests, and the Essex-class carrier Oriskany was scuttled off Florida as a diving reef; this is likely to be the fate of their successors. Midway spent five years in the mothball fleet at Bremerton, Washington before being rescued by a museum group. The ship is now open to the public as a museum in San Diego, California. 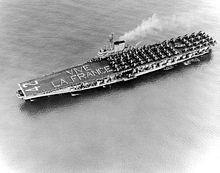 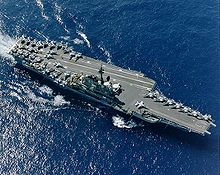