Katsuragi (葛城?) was a Unryū-class aircraft carrier of the Imperial Japanese Navy built during World War II. Named after Mount Katsuragi,[1] and completed late in the war; she never embarked her complement of aircraft and did not participate in any battles. The ship was badly damaged in a July 1945 airstrike by American carrier aircraft on Kure Naval Base. Repaired after the end of the war, Katsuragi was then used as a repatriation transport for a number of months, bringing Japanese soldiers and civilians back to Japan from overseas locations. She was scrapped in Japan beginning in late 1946.

The ultimate expression of Japanese carrier construction during World War II was a group of vessels based on an improved Hiryū design, but with individual units differing in detail reflecting the changing circumstances as the conflict in the Pacific approached its conclusion. Katsuragi was ordered 25 June 1942, under the provisional name of #5003, as part of the Kai-Maru 5 Program of 1942. This was a massive naval construction program intended to replace losses suffered at the Battle of Midway and focused on aircraft and aircraft carriers. The ship was one of 16 Unryū-class aircraft carriers planned, although only three were completed before the end of the war.[2][Note 1]

Katsuragi's flight deck was 216.9 meters (711 ft 7 in) long and had a maximum width of 27 meters (88 ft 7 in). A small island was mounted well forward on the starboard side and contained the ship's bridge and air operations control center. It was fitted with a small tripod mast that mounted one of the ship's radar antennaas. The ship was designed with two superimposed hangars that were served by two aircraft elevators, each 14 by 14 meters (46 by 46 ft); the center elevator as used in Hiryū was deleted to simplify construction and reduce stress in the hull. The elevators had a maximum capacity of 7,000 kilograms (15,000 lb) and took 19 seconds to go from the lower hangar to the flight deck. Katsuragi was fitted with hydraulically operated Type 3 arresting gear with nine cables. She also mounted three Type 3 crash barricades. No aircraft catapult was fitted. The ship mounted a retractable crane on the starboard side of the flight deck, just aft of the rear elevator.[5]

The ship's air group was originally intended to consist of 12 Mitsubishi A6M Zero fighters, plus three in storage, 27 Aichi D3A Val dive bombers, plus three in reserve, and 18 Nakajima B5N "Kate" torpedo bombers (plus two in crates). Katsuragi's hangars could not accommodate so many aircraft so eleven planes were planned to be permanently carried of the flight deck. In 1943 the air group was revised to consist of 18 Mitsubishi A7M "Sam" fighters (+2 in storage), 27 Yokosuka D4Y "Judy" dive bombers and six Nakajima C6N "Myrt" reconnaissance aircraft. Of these, the C6Ns were intended to be carried on the flight deck. When the ship commissioned in 1944, neither the A7M nor the C6Ns were yet in service, so the air group was reconfigured to consist of 27 Zeros, 12 D4Ys, three of which were to be the reconnaissance version, and nine Nakajima B6N "Jill" torpedo bombers. By this time, however, the shortage of carrier-qualified aircrew was such that they were ordered to operate from shore bases and Katsuragi never embarked her air group.[6]

The ship's primary armament consisted of a dozen 40-caliber 12.7 cm Type 89 anti-aircraft (AA) guns in twin mounts. Their sponsons were positioned to allow them some measure of cross-deck fire. Katsuragi was also equipped with 22 triple 25 mm Type 96 and thirty single AA gun mounts, most on sponsons along the sides of the hull. These guns were supplemented by six 28-round AA rocket launchers. For defense against submarines, the carrier was fitted with six depth charge throwers and carried between six and ten depth charges for them.[8]

Two Type 94 high-angle fire-control directors, one on each side of the ship, were fitted to control the Type 89 guns. Each director mounted a 4.5-meter (14 ft 9 in) rangefinder. Six Type 95 directors controlled the 25 mm guns and the 12 cm rocket launchers. Early warning was provided by two Type 2, Mark 2, Model 1 air search radars. One of these was mounted on the top of the island while the other retracted into the port side of the flight deck, between the two elevators. In addition, Katsuragi had two smaller Type 3, Mark 1, Model 3 air search radars, one mounted on the tripod mast on the island and the other on the aft starboard retractable radio mast. She also had two radar detectors: a metric Type E-27 and a centimetric Model 3 system. The ship had a Type 93 sonar and two Type 0 hydrophones with which to search for submarines. Before the end of the war, a Type 2, Mark 2, Model 4 surface fire-control radar was installed. In addition, a Type 14 early warning radar, ordinarily land-based, was mounted for trials aboard ship.[9] 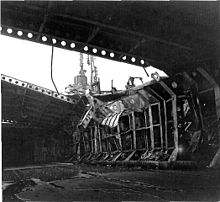 Katsuragi's keel was laid down by the Kure Naval Arsenal in Kure, Hiroshima, on 8 December 1942.[2] She was launched on 19 January 1944 and completed on 15 October 1944.[10] The ship was transferred among a number of ports on the Inland Sea until she arrived in Kure on 15 February 1945 and she was ordered to be camouflaged. Her intended air group, Air Group 601, was committed to the Battle of Iwo Jima about that same time. On 19 March, the ship was attacked by aircraft from Task Force 58 and lightly damaged by several rocket hits; one man was killed and three wounded in the attack. Five days later, the ship was permanently moored at an island in Kure harbor and extensively camouflaged. Aircraft from Task Force 38 attacked the ship on 24 July, but she was only hit once. A 500-pound (230 kg) bomb struck one of the ship's anti-aircraft mounts on the port side. Thirteen men were killed and five wounded, but the bomb did little other damage. A second raid on 28 July did far more damage to the ship as a 2,000-pound (910 kg) bomb penetrated the flight deck and detonated in the upper hangar, between the elevators. The explosion blew out a 20-foot (6.1 m) section of the port hangar wall and the walls of the upper hangar deck were bulged and perforated multiple times. The flight deck between the elevators was bulged up and buckled; one section of the flight deck out was blown out and flung over to starboard to land across the funnels. Only 13 men were killed and another 12 men were wounded during the attack.[11]

Katsuragi survived the war without sustaining any further damage, and was designated as a Special Transfer Ship on 2 October and then assigned to repatriation duty on 13 October after the necessary repairs were made. Her crew at this time consisted only of 12 officers, 1 warrant officer, and 40 petty officers and men. The damage from the July attack was only repaired enough to allow the hangar deck to house some 5,000 returning soldiers and civilians and the ship began her first voyage outside Japanese waters on 19 December. Upon her return, further repairs were necessary to make her rain-tight. These were completed by 15 January 1946 and she made a number of trips in early 1946 to bring back Japanese nationals before being placed on standby in April.[11] Katsuragi was stricken from the Navy List on 15 November and transferred to the Home Ministry for disposal five days later. Scrapping of the ship began on 22 December 1946 at the Hitachi Zosen facility in Osaka-Sakurajima and was completed on 30 November 1947.[12]

In the Japanese anime Neon Genesis Evangelion, the last names of most primary characters are taken from warships. Misato Katsuragi is named for this vessel.