The flag of Morocco (Berber: Acenyal n Umerruk, Arabic: علم المغرب‎) is made of a red field with a black-bordered green pentagram. Red has considerable historic significance in Morocco, proclaiming the descent of the royal Alaouite family from the Prophet Muhammad via Fatima, the wife of Ali, the fourth Muslim Caliph. Red is also the color that was used by the Sherifs of Mecca and the Imams of Yemen. From the 17th century on, when Morocco was ruled by the Alaouite Dynasty, the flags of the country were plain red. In 1915, during the reign of Mulay Yusuf, the green interlaced pentangle was added to the national flag. While Morocco was under French and Spanish control, the red flag with the seal in the center remained in use, but only inland. Its use at sea was prohibited. When independence was restored in 1956, it once again became the national flag.

The red background on the Moroccan flag represents hardiness, bravery, strength and valour, while the green, five-pointed star represents the Solomon’s seal.

To be known from this book, may god uphold its value and to be around the centre of grace and joy its orbit, that due to the promotion of our cherifian kingdom affairs, the spread of its glory and its pride, the need to assign a flag that distinct it from the rest of the kingdoms as that our sacred ancestors flag use to be very similar to some other flags especially the ones used in the marine signs, our noble vision decided to distinct our joyful flag by making the five pointed seal of Solomon in the middle in green, asking the almighty god to keep it waving with the winds of fortune and ambition for this time and the becoming, Amen and peace.

— Yusef of Morocco, A Cherifian Dahir in the distinction of the Moroccan flag (Ar), 17 November 1915 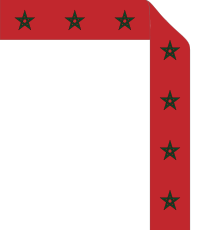 On May 8, 2010, a Moroccan flag with a size of 60,409.78 meters squared, weighing 20 tonnes, was set in Dakhla, a city in the disputed territory of Western Sahara. It was certified by the Guinness Book of World Records as the largest flag ever draped.[1] The Moroccan flag is also used by the Moorish Science Temple of America.