Dakhla (Dajla), or ad-Dakhla (Arabic: الداخلة‎) (formerly Villa Cisneros, under Spanish rule), is a city in the Western Sahara with about 55,618 inhabitants.[1] It is about 550 km south of El Aaiún on a narrow peninsula of the Atlantic Coast. It is the capital of the Moroccan administrative region Oued Ed-Dahab-Lagouira.

Dakhla was founded as Villa Cisneros in 1502 by Spanish settlers during the expansion of their Empire. 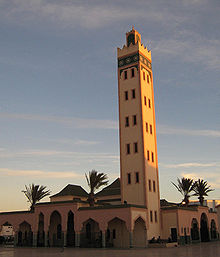 During the colonial period, the Spanish authorities made Dakhla the capital of the province of Río de Oro, one of the two regions of what was known as Spanish Sahara. They built a military fortress and a modern Catholic church, both of which remain points of interest for visitors to the city. A prison camp also existed here during the Spanish Civil War, at which writers such as Pedro García Cabrera were imprisoned.

During the 1960s, the Francoist dictatorship also built here one of the three paved airports in Western Sahara at Dakhla Airport. Between 1975 and 1979, Dakhla was the province capital of the Mauritanian province of Tiris al-Gharbiyya, as Mauritania annexed portion of Western Sahara. Dakhla Airport is used as public airport and by the Royal Air Maroc. The 3 km. long runway can receive a Boeing 737 or smaller planes. The passenger terminal covers 670 m² and is capable to handle up to 55.000 passenger/year.

The main economic activity of the city is fishing and tourism. In recent years the town has become a centre for aquatic sports, such as kitesurfing, windsurfing and surf casting.