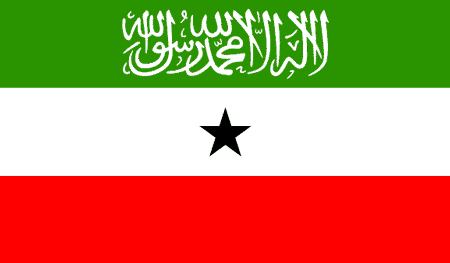 Use = 111000
Symbol =
Proportion = 1:2
Adoption = ,
Design = A horizontal of , , and , with the "" inscribed in white on the green stripe, and a black 5-pointed star charged on the white stripe
Type = NationalThe current flag of , the former British part of , was introduced on , , when it was approved by the National Conference. Somaliland, which declared its independence on , , is still not recognised by any other country.

The flag in general contains the of green, black, white and red. On the green stripe, there is the in white script, similar to that of the Saudi Arabian flag. The white band contains a black star, "the demise of greater Somalia's dream".

Constitution of the Republic of Somaliland, as approved on , by referendum:

Article 7: The Flag, the Emblem and the National Anthem

1. The flag of the Republic of Somaliland shall consist of three horizontal, parallel and equal sections, the top section, which is coloured green and has inscribed in its midst in white in Arabic language "La Ilaha Ill-Allah, Muhammadan Rasulullah" (أشهد أن لا إله إلاَّ الله و أشهد أن محمد رسول الله, There is no god except for Allah, and Muhammad is the messenger of God); the middle section is white and has at its centre a black star; and the bottom section is coloured red.

Rules for the usage of the Flag

The government set out principles on how to use the flag. It should be treated with respect and used very carefully and sensitivity. Because the has huge importance in Islam, the first pillar of Islam "etc", regulations have specially been made on the usage of the flag.

It is forbidden for Somalis to fly the flag at because it has the (which says in Arabic "There is no other God except Allah, Muhammad is the Messenger of Allah") written on it so it will be an un- and disrespectful way to treat the flag. Even if the President or someone with a high Somaliland governmental status dies, the flag does not fly at half-mast. When the second died, he received a and thousands of Somalis flocked to witness his funeral and mourn his death but the Flag of was raised at full mast instead of the traditional half-mast gesture. Moreover, if a person is seen lowering the flag at half-mast, they might be taken to gaol or to and it would be considered as a . Similar rules, for the same reason, also apply to the flag of

Although the aforementioned Article 7 clearly states that the bottom of the flag is red, many versions have been seen with a clear orange colour instead. Another variation is the orientation of the star, many Somaliland flags have the star pointing the opposite direction from other flags, this upside-down star version is used quite widely.

Some flags have a plain green band, without the holy Shahada script, hence may be exempt from the half-mast rule (although this is unclear), other flags have the Shahada written along the full length of the green stripe.

Most Somaliland flags are of the ratio 2:1. This seems to be a common factor in flags used by the people of Somaliland and people calling for Somaliland recognition. Pictures of flags on the internet etc. often erroneously show a shorter flag (of ratio 2:3 etc). [http://flagspot.net/flags/so-mv.html]

When the British annexed and occupied the area that encompasses "" in 1903, they established a and made it part of the . The reason for this was the region was in a major trading zone and it was a crucial trading link with and . The British adopted a new flag for the region (officially named ""). Like many Commonwealth countries, the flag had a defaced : a blue field with the in the upper hoist quarter of the flag. Also, There was an image of a (an native to the Somaliland area) on a white disc. The flag was flown on top of Somali fleet or Government buildings in .

In 1950 The Protectorate of 's badge and flag changed and thus all flags which bore it. The flag still had the on the quarter-hoist, therefore that was unchanged. The 's head and shoulders were retained and taken off to formed the most dominant feature on the new arms, although the antelope's face was now looking straight out at the observer. Between its horns, the Royal crown was inserted to symbolize the and the in general.

The badge was changed as well; it consisted of an escutcheon divided vertically into green and blue colours, having a chief with a golden Somali shield in front of two spears in , heads downwards, in natural colours. The green portion contained an image of a white . Moreover, on the blue quarter, an in full sail on waves of the sea, with a golden anchor in the base. The 's head was facing forward to the observer instead of facing left on the earlier version. Above, the was the Royal Crown between the horns. Underneath, there was a wreath coloured in green and yellow which formed the very imposing Crest.

When attained her on and was united with the rest of on the same year, the flag was no longer used.