The Flag of Niger has been the national symbol of the West African Republic of Niger since 1959, a year prior to its formal independence from France. It uses the national colors of orange, white and green, in equal horizontal bands, with an orange rondel in the center. The flag forms one of the official national symbols of the Republic of Niger, with the coat of arms of Niger, the National Anthem ("la Nigérienne"), the crest (used in the center of the coat of arms), and the motto: "Fraternité, Travail, Progrès". These form Article 1 of the first part of the 1999 Constitution of Niger. The flag is similar to the Flag of India, although the ratio, shade of orange, and symbol in the center differ. 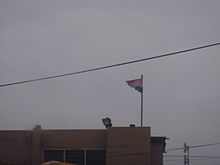 A Niger flag flying over Niger's embassy in Accra, Ghana

Prior to independence from French West Africa, the flag of Niger was adopted by the Territorial Assembly of the Niger Colony on 23 November 1959, shortly before proclamation of the Republic within the French Community on 18 December 1959. The flag was designed in 1958. It was retained upon independence in 1960 and has remained unchanged through the 1999 Fifth Constitution

A number of sources have described the symbolic intent of the flag, although official sources are silent upon this. A common interpretation is that the upper orange band represents the northern regions of the Sahara Desert (though this is sometimes said to be the Sahel), the center white band represents purity (though this is sometimes said to be the River Niger), and the lower green band represents both hope and the fertile regions of southern Niger. The orange circle in the center band is said to represent the sun or independence.[1]

Niger's flag is a tricolour, in common with other former dependencies and colonies of France.

The flag's traditional portrayal with an unusual 6:7 ratio is of unknown significance and is not used consistently in print applications of the Nigerien government.[2]