Bartlett was born in Moreland, Kentucky to Martha Minnick and Roscoe Gardner Bartlett.[1] He completed his early education in a one-room schoolhouse. He attended Columbia Union College (now Washington Adventist University), a college affiliated with the Seventh-day Adventist Church, and graduated in 1947 with a B.S. in theology and biology and a minor in chemistry. He had intended to be a Seventh-Day Adventist minister, but he was considered too young for the ministry after receiving his bachelor's degree at the age of 21.

Afterwards, Bartlett was encouraged to attend graduate school at the University of Maryland, College Park. He studied anatomy, physiology, and zoology, earning a Master's degree in physiology in 1948. Bartlett was then hired as a faculty member at Maryland and taught anatomy, physiology and zoology while working towards his Ph.D. in physiology, which he earned in 1952. His academic career included lecturing at Loma Linda School of Medicine, also affiliated with the Seventh-day Adventist Church, in Loma Linda, California (1952–1954), and serving as an assistant professor at Howard University College of Medicine in Washington, D.C. (1954–1956).

In August 2011, Bartlett wrote an op-ed in The New York Times calling for an end to invasive research on primates.[2] Bartlett, who had previously conducted research on primates in connection with the US space program, joined with Senator Maria Cantwell in introducing the Great Ape Protection and Cost Savings Act.[3] 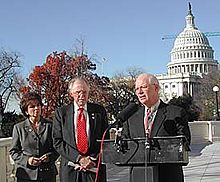 Bartlett ran in the Republican primary for the United States Senate in 1980, and finished a distant fourth behind incumbent Charles Mathias.

In 1982, Bartlett was an unsuccessful candidate for Congress against incumbent Democrat Beverly Byron.[4]

He ran again in 1992 and won the Republican nomination, expecting to face Byron again. Byron was upset by a somewhat more liberal Democrat, State Delegate Thomas Hattery, in the primary. Many conservative Democrats switched their support to Bartlett in November.[4] Bartlett won by a decisive eight-point margin and has been reelected eight more times without serious difficulty.

According to the Frederick News-Post, Bartlett underreported property sales by over $1 million since 2004 on his official financial desclosure forms ( a serious crime for government employees). Bartlett said that the underreporting was an oversight and that he was “bit player” in the real estate transactions. Also according to the Frederick News-post Bartlett made $299,000 in unreported loans in order to sell his daughter's home over which he exercised power of attorney.[5]

As the lone Republican in Maryland's congressional delegation, Bartlett won reelection in 2010 at the age of 84.[6] On June 1, 2009 Democrat and Iraq war veteran Andrew Duck formally announced a campaign for Congressman Bartlett's seat.[7] 2010 Federal Financial Disclosure forms show Rep. Bartlett to be the wealthiest member of the Maryland delegation to Congress.

Bartlett and his wife Ellen have 10 children, of whom one, Joseph R. Bartlett, is a former member of the Maryland House of Delegates, 17 grandchildren and 2 great-grandchildren[8].