Louis B. Mayer
For the North Carolina jurist, see Louis B. Meyer.

Louis Burt Mayer (July 12, 1884[1] – October 29, 1957) born Lazar Meir (Russian: Лазарь Меир) was an American film producer. He is generally cited as the creator of the "star system" within Metro-Goldwyn-Mayer (MGM) in its golden years. Known always as Louis B. Mayer and often simply as "L.B.", he believed in wholesome entertainment and went to great lengths so that MGM had "more stars than there are in the heavens".

He was born Lazar Meir possibly on July 12, 1884 to a Jewish family in Dymer, Ukraine.[1][2] His parents were Jacob Meir and Sarah Meltzer and he had two sisters—Yetta, born in 1878, and Ida, born in 1883. Mayer first moved with his family to Rhode Island, where they lived from 1887 to 1892 and where his two brothers were born—Rubin, in April 1888,[3] and Jeremiah, in April 1891.[4] Then, they moved to Saint John, New Brunswick, Canada and Mayer attended school there. He and his brothers often faced anti-Semitic bullies and Mayer was constantly involved in fights.[5] His father started a scrap metal business, J. Mayer & Son. In 1904, the 19-year-old Mayer left Saint John for Boston, where he continued for a time in the scrap metal business, married, and took a variety of odd jobs to support his family when his junk business lagged.

Mayer renovated the Gem Theater, a rundown, 600 seat burlesque house in Haverhill, Massachusetts,[6] which he reopened on November 28, 1907 as the Orpheum, his first movie theater. To overcome the unfavorable reputation that the building once had in the community, Mayer decided to debut with the showing of a religious film. Years later, Mayer would say that the premiere at the Orpheum was From the Manger to the Cross,[7] although most sources place the release date of that film as 1912.[8] Within a few years, he owned all five of Haverhill's theaters, and, with Nathan H. Gordon, created the Gordon-Mayer partnership that controlled the largest theater chain in New England.[9]

In 1914, the partners organized their own film distribution agency in Boston. Mayer paid D.W. Griffith $25,000 for the exclusive rights to show The Birth of a Nation (1915) in New England. Although Mayer made the bid on a film that one of his scouts had seen, but he had not, his decision netted him over $100,000.[10] Mayer partnered with Richard A. Rowland in 1916 to create Metro Pictures Corporation, a talent booking agency, in New York City.

Two years later, Mayer moved to Los Angeles and formed his own production company, Louis B. Mayer Pictures Corporation. The first production was 1918's Virtuous Wives.[11] A partnership was set up with B. P. Schulberg to make the Mayer-Schulberg Studio. Mayer's big breakthrough, however, was in April 1924 when Marcus Loew, owner of the Loew's chain, merged Metro Pictures, Samuel Goldwyn's Goldwyn Pictures Corporation, and Mayer Pictures into Metro-Goldwyn. Loew had bought Metro and Goldwyn some months before, but could not find anyone to oversee his new holdings on the West Coast. Mayer, with his proven success as a producer, was an obvious choice. He was named head of studio operations and a Loew's vice president, based in Los Angeles, reporting to Loew's longtime right-hand man Nicholas Schenck. He would hold this post for the next 27 years. Before the year was out, Mayer added his name to the studio with Loew's blessing, renaming it Metro-Goldwyn-Mayer.

Loew died in 1927, and Schenck became president of Loew's. Mayer and Schenck hated each other intensely; Mayer reportedly referred to his boss, whose name was pronounced "Skenk," as "Mr. Skunk" in private.[12] Two years later, Schenck agreed to sell Loew's — and MGM — to William Fox. Mayer was outraged; despite his important role in MGM, he was not a shareholder. Mayer used his Washington connections to persuade the Justice Department to delay the merger on antitrust grounds. During the summer of 1929, Fox was severely injured in an auto accident. By the time he recovered, the stock market crash had wiped out his fortune, destroying any chance of the deal going through even if the Justice Department had lifted its objections. Nonetheless, Schenck believed Mayer had cost him a fortune and never forgave him, causing an already frigid relationship to get even worse. 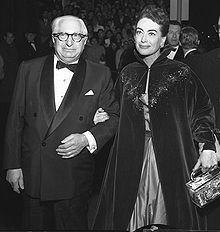 With Joan Crawford at the premiere of Torch Song (1953)

As a studio boss, Louis B. Mayer built MGM into the most financially successful motion picture studio in the world and the only one to pay dividends throughout the Great Depression of the 1930s. Although he initially got along well with production chief Irving Thalberg, their relationship soon frayed over philosophical differences. Thalberg preferred literary works over the crowd-pleasers Mayer wanted. He ousted Thalberg as production chief in 1932 while Thalberg was recovering from a heart attack and replaced him with independent producers, e.g. David Selznick, until Thalberg's death in 1936, when Mayer became head of production as well as studio chief. He became the first person in American history to earn a million-dollar salary. For nine years from 1937, when he earned $1,300,000—equivalent to $19,886,977 today[13]—Mayer was the highest-paid man in the United States.[14]

Under Mayer, MGM produced many successful films with high earning stars, including Greta Garbo, Clark Gable, Spencer Tracy, Katharine Hepburn, Lon Chaney, Joan Crawford, Jean Harlow, Judy Garland and many others. Mayer was ruthless when negotiating to keep his actors' salaries low, even using blackmail to pay Gable below his worth,[15] although Katharine Hepburn referred to him as a "nice man" and claimed she personally negotiated many of her contracts with Mayer. Elizabeth Taylor described Mayer as a monster,[16] but other actors, such as Robert Taylor,[15] Greer Garson,[17]:260 and Hedy Lamarr,[18] viewed him as a father figure.

Later years and fall from power

By 1948, due to the introduction of television and changing public tastes, MGM suffered a considerable dropoff in its success. The glory days of MGM as well as other studios were also over because of United States v. Paramount Pictures, Inc. (1948), a Supreme Court decision that severed the connection between film studios and the movie theater chains that showed their films (though it would be another six years before Loew's sold majority control of MGM).

By 1951, MGM had gone three years without a major Academy Award, which provoked further conflict between Mayer and Schenck. Believing that Mayer could not turn the tide, Schenck fired Mayer from the post he had held for 27 years, replacing him with Schary. The firing reportedly came after Mayer called New York and issued an ultimatum--"It's him or me" (or "It's either me or Schary", depending on the source). Mayer tried to stage a boardroom coup but failed and largely retired from public life.

Mayer also loved boats and racehorses, and owned a number of each.

In the 2005 biography, Lion of Hollywood, author Scott Eyman wrote that: "Mayer built one of the finest racing stables in the United States" and that he "almost single-handedly raised the standards of the California racing business to a point where the Eastern thoroughbred establishment had to pay attention." Among his horses was Your Host, sire of Kelso, the 1945 U.S. Horse of the Year, Busher, and the 1959 Preakness Stakes winner, Royal Orbit. Eventually Mayer sold off the stable, partly to finance his divorce in 1947. His 248 horses brought more than $4.4 million. In 1976, Thoroughbred of California magazine named him "California Breeder of the Century".

Louis B. Mayer died of leukemia on October 29, 1957.[20] He was interred in the Home of Peace Cemetery in East Los Angeles, California. His sister, Ida Mayer Cummings, and brothers Jerry and Rubin are also interred there.

Mayer has been portrayed numerous times in film and television including:

Jacqueline Susann portrayed Mayer in Valley of the Dolls as Cyril H. Bean, referred to by his employees as "The Head".