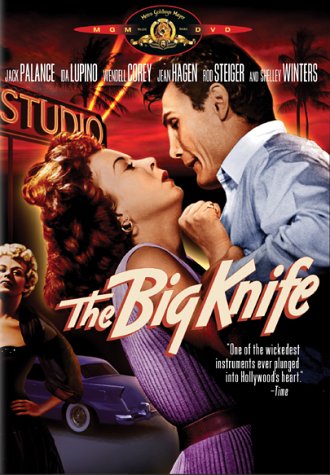 The film is a ruthless and poignant look at fame and the movie business.

On the advice of his idealistic wife (Lupino), Charles Castle (Palance), a A-list actor, refuses to renew his contract. This enrages his studio boss, Stanley Shriner Hoff (Steiger).

Hoff and his assistant (Corey), have knowledge of a hit-and-run accident the previous year Castle was involved and threaten to use the information against him. Hoff is willing to do anything to make the actor sign the seven-year renewal even if that means destroying his career.

"New York Times" film critic , was disappointed and believed the storyline lacked credibility. He wrote, "Actually, it looks as though "The Big Knife" originally was written and aimed as an angry, vituperative incident of the personal and professional morals of Hollywood. This is the clear implication of what is presented on the screen...But the simple fact is that Mr. Odets—and James Poe, who wrote the screen adaptation—were more disposed to extreme emotionalism than to actuality and good sense. They picture a group of sordid people jawing at one another violently. But their drama arrives at a defeatist climax. And this viewer, for one, was not convinced." [ [http://movies.nytimes.com/movie/review?_r=1&res=9807EEDE1E3AE53BBC4153DFB767838E649EDE&oref=slogin Crowther, Bosley] . "The New York Times," film review, , . Last accessed: , .]

More recently, critic Dennis Schwartz wrote, " Robert Aldrich... directs this intelligent noirish melodrama...The film did not have a good box office according to Aldrich because the public never felt sympathetic to Palance's character and Palance himself didn't have matinee star good looks to make his part believable as a Hollywood star. No major studio would make this expose on tinseltown, so it was made by United Artists on a low-budget and shot in 16 days...The movie stresses that the struggle is a personal one over survival and redemption rather than idealism, which allows the sparks to fly among the disagreeable leading characters as they trade lines only an insider could pen. The masterful performance by Palance as the tormented artist defies the clichés of his insulated and self-absorbed character. He expresses all his anguish and hurt in the star system he willingly signed on for to reap the benefits of the rewards, and shows the futility that boggles his mind to the point he doesn't realize when he's acting or speaking for real. It was shocking when first released in 1955 but is now considered tame by modern standards." [ [http://www.sover.net/~ozus/bigknife.htm Dennis Schwartz Dennis Schwartz] . "Ozus' World Movie Reviews," film review, , . Last accessed: February 20, 2008.]

Film critic Jeff Stafford analyzed some of the film's elements, and wrote, " [Of the previous Hollywood-expose dramas] none...can match the negative depiction of the movie business and its power brokers offered in "The Big Knife"...The use of long takes by cinematographer Ernest Laszlo adds greatly to the film's claustrophobic tension and the mingling of fictitious names with real ones (, , and others) throughout the dialogue gives "The Big Knife" a candid, almost documentary-like quality at times." [ [http://www.tcm.com/thismonth/article/?cid=12482&rss=mrqe Stafford, Jeff] . "Turner Movie Classics," film review and analysis, 2008. Last accessed: February 20, 2008.]