A precrash system is an automobile safety system designed to reduce the severity of an accident. Also known as forward collision warning systems they use radar and sometimes laser sensors to detect an imminent crash. Depending on the system they may warn the driver, precharge the brakes, inflate seats for extra support, move the passenger seat, position head rests to avoid whip lash, tension seat belts and automatically apply partial or full braking to minimize impact. In 2009 the U.S. National Highway Traffic Safety Administration (NHTSA) began studying whether to make frontal collision warning systems and lane departure warning systems mandatory.[1]

The full version of the system (Pre-Sense Plus) works in four phases. In the first phase, the system provides warning of impending accident, while the hazard warning lights are activated, the side windows and sunroof are closed and the front seat belts are tensioned. In the second phase, the warning is followed by light braking, strong enough to win the driver's attention. The third phase initiates autonomous partial braking at a rate of 3 m/s². The fourth phase decelerates the car at 5 m/s² followed by automatic deceleration at full braking power, roughly half a second before projected impact. 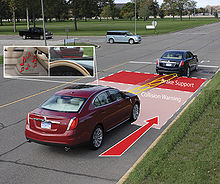 Collision Warning with Brake Support on the 2009 Lincoln MKS

Ford's Collision Warning with Brake Support was introduced in 2009 on the Lincoln MKS and MKT and the Ford Taurus.[4] This system provides a warning through a Head Up Display that visually resembles brake lamps. If the driver does not react, the system pre-charges the brakes and increases the brake assist sensitivity to maximize driver braking performance.

Honda's Collision Mitigation Brake System (CMBS, although originally introduced with the initials CMS) introduced in 2003 on the Inspire[5] (and later in Acura, Honda's luxury brand in Canada and the United States) uses a radar-based system to monitor the situation ahead and provide automatic braking if the driver does not react to a warning in the instrument cluster and a tightening of the seat belts.[6][7] The Honda system was the world's first production system to provide automatic braking.[7] The 2003 Honda system also incorporated an "E-Pretensioner" which worked in conjunction with the CMBS system with electric motors on the seat belts. When activated, the CMBS has three warning stages. The first warning stage includes audible and visual warnings to brake. If ignored, the second stage would include the E-Pretensioner tugging on the shoulder portion of the seat belt two to three times as an additional tactile warning to the driver to take action. The third stage, in which the CMBS predicts a collision is unavoidable, includes full seatbelt slack take up by the E-Pretensioner for more effective seat belt protection, and automatic application of the brakes to lessen the severity of the predicted crash. The E-Pretensioner would also work to reduce seatbelt slack whenever the brakes are applied and the brake assist system is activated [7]

Nissan's luxury brand in North America and Europe, Infiniti, offers a laser-based system in the US market, which pre-pressurizes the braking system so maximum force can be applied early. Nissan is reportedly developing a new "magic bumper" system which raises the accelerator pedal if it senses an impending collision. Once the driver lifts off the pedal, the system then automatically applies the brakes.[9]

Mercedes's Pre-Safe system was unveiled in the fall of 2002 at the Paris Motor Show on the 2003 S-Class. Using ESP sensors to measure steering angle, vehicle yaw and lateral acceleration and Brake Assist sensors to detect emergency braking, Pre-Safe can tighten the seat belts, adjust seat positions including rear seats (if installed), raise folded rear headrests (if installed) and close the sunroof if it detects possible collision (including rollover) .[10] A later version of Pre-Safe system was supplemented by an additional function that can close any open windows if necessary.

Pre-Safe Brake, Mercedes-Benz's first forward warning collision system was introduced in the fall of 2005 on the redesigned 2006 S-Class[11] is co-operating with simultaneously introduced Brake Assist Plus and Distronic Plus systems and provides all the functions of previous Pre-Safe system while adding a radar-based system which monitors the traffic situation ahead and provides automatic partial braking (40% or up to 0.4g deceleration) if the driver does not react to the Brake Assist Plus warnings and the system detects a severe danger of an accident.[12][13]

At the 2009 North American International Auto Show Mercedes unveiled Attention Assist on the 2010 E-class which based on 70 parameters attempts to detect the driver's level of drowsiness based on the driver's driving style. This system does not actually monitor the driver's eyes.[14] Also in 2009 Mercedes added the first fully autonomous braking feature that provides maximum braking force approximately 0.6 seconds before impact.[15] 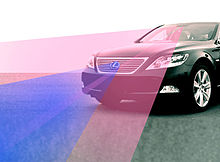 Toyota Motor Corporation's Pre-Collision System (PCS), the first production forward warning collision system, is used on the manufacturer's Lexus and Toyota brand vehicles. It is a radar-based system which uses a forward-facing millimeter-wave radar. When the system determines a frontal collision is unavoidable it preemptively tightens the seat belts removing any slack and pre-charges the brakes using brake assist to give the driver maximum stopping power instantly when the driver depresses the brake pedal. Toyota launched PCS in February 2003 on the redesigned Japanese domestic market Harrier and in August 2003 added an automatic partial pre-crash braking system to the Celsior.[16][17] In September 2003, PCS made its first appearance in North America on the Lexus LS 430, becoming the first such system offered in the US.[18] In 2004, Toyota advanced the system by adding to the radar a single digital camera to improve accuracy of collision forecast and warning, control levels, it was first available on the Crown Majesta.[19][20][21]

In 2006, the debut of the Lexus LS featured a further advanced version of the PCS; this newer version dubbed Advanced Pre-Collision System (APCS) added a twin-lens stereo camera located on the windshield and a more sensitive radar to detect for the first time smaller "soft" objects such as animals and pedestrians. A near-infrared projector located in the headlights allows the system to work at night. By using the LS's Adaptive Variable Suspension (AVS) and electric Variable Gear Ratio Steering (VGRS) the system can change the suspension damper firmness, steering gear ratios and torque assist to aid the driver's evasive steering measures in a system known as "Collision-avoidance Steering Support". The Lane Keep Assist system will make automatic steering adjustments to help ensure the vehicle maintains its lane in case the driver fails to react.

Also unveiled for the 2007 model year, the world's first Driver Monitoring System was introduced on the Lexus LS, using a CCD camera on the steering column, this system monitors the driver's face to determine where the driver is looking. If the driver's head turns away from road and a frontal obstacle is detected the system will alert the driver using a buzzer and if necessary pre-charge the brakes and tighten the safety belts. A later version of the Driver Monitoring System found in 2008 on the Crown monitors the driver's eyes to detect the driver's level of wakefulness. This system is designed to work if the driver is wearing sunglasses and at night.

Other advancements to the PCS appearing on the 2007 Lexus LS include the first rearward-facing millimeter-wave radar mounted in the rear bumper.[22] This system adjusts the active head restraints by moving them upward and forward to reduce the risk of whiplash injuries if an imminent rear collision is detected.[23] 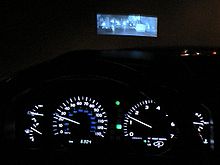 Toyota began using Night View on the JDM 2002 Toyota Landcruiser Cygnus and on the 2003 Lexus LX 470 available in US market. In 2008 Toyota added a pedestrian detection feature on the Crown which highlights pedestrians and presents them on an LCD display located in front of the driver.[24] The latest Crown also uses a GPS-navigation linked brake assist function. The system is designed to determine if the driver is late in decelerating at an approaching stop sign, it will then sound an alert and can also precharge the brakes to provide optimum braking force if deemed necessary. This system works in certain Japanese cities and requires Japan specific road markings which are detected by a camera.

In March 2009 on the redesigned Crown Majesta,[25] Toyota again further advanced the "PCS" adding a front-side millimeter-wave radar to detect potential side collisions primarily at intersections or when another vehicle crosses the center line. The latest version tilts the rear seat upward placing the passenger in a more ideal crash position if it detects a front or rear impact.[26] This latest Crown also features a new rear center airbag.

Front Assist on the 2011 Volkswagen Touareg can brake to a stop in case of an emergency and tension the seatbelts as a precautionary measure.[27]

Volvo's Collision Warning with Auto Brake (CWAB)[28] developed in cooperation with Mobileye N.V. was introduced on the 2007 Volvo S80. This system is powered by a radar/camera fusion and provides a warning through a Head Up Display that visually resembles brake lamps. If the driver does not react, the system pre-charges the brakes and increases the brake assist sensitivity to maximize driver braking performance.

Precrash systems are currently available on the following vehicles: