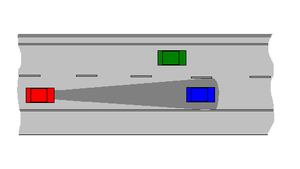 Autonomous cruise control is an optional cruise control system appearing on some more upscale vehicles. The system goes under many different trade names according to the manufacturer. These systems use either a radar or laser setup allowing the vehicle to slow when approaching another vehicle and accelerate again to the preset speed when traffic allows - example video. ACC technology is widely regarded as a key component of any future generations of intelligent cars. 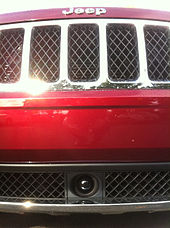 Laser-based systems are significantly lower in cost than radar-based systems; however, laser-based ACC systems do not detect and track vehicles well in adverse weather conditions nor do they track extremely dirty (non-reflective) vehicles very well. Laser-based sensors must be exposed, the sensor (a fairly large black box) is typically found in the lower grille offset to one side of the vehicle.

Radar-based sensors can be hidden behind plastic fascias; however, the fascias may look different from a vehicle without the feature. For example, Mercedes packages the radar behind the upper grille in the center, and behind a solid plastic panel that has painted slats to simulate the look of the rest of the grille.

Single radar systems are the most common. Systems involving multiple sensors use either two similar hardware sensors like the 2010 Audi A8[1] or the 2010 Volkswagen Touareg,[2] or one central long range radar coupled with two short radar sensors placed on the corners of the vehicle like the BMW 5 and 6 series.[3]

Radar-based ACC often feature a Precrash system, which warns the driver and/or provides brake support if there is a high risk of a collision. Also in certain cars it is incorporated with a lane maintaining system which provides power steering assist to reduce steering input burden in corners when the cruise control system is activated.

GPS-aided ACC: the GPS navigation system provides guidance input to the ACC. On the motorway, the car in the front is slowing down, but with turn signal on and it is actually heading for a highway off-ramp. A conventional ACC would sense the car in front was decelerating and it would simply apply brakes accordingly. But with GPS-guided ACC takes into account the approaching highway exit and it simultaneously receives images from the camera attached to the rearview mirror on the front. The camera can detect the turn signal from the car ahead. So instead of braking, this new system continues uninterrupted, because it knows that the car in front will exit the lane.[4]

Mitsubishi was the first automaker to offer a laser-based ACC system in 1995 on the Japanese Diamante. Marketed as "Preview Distance Control", this early system did not apply the brakes and only controlled speed through throttle control and downshifting.[5][6][not in citation given]

In August 1997, Toyota began to offer a "radar cruise control" system on the Celsior.[7][8] Toyota further refined their system by adding "brake control" in 2000 and "low-speed tracking mode" in 2004. The low-speed speed tracking mode was a second mode that would warn the driver if the car ahead stopped and provide braking; it could stop the car but then deactivated.[9] In 2006, Toyota introduced its "all-speed tracking function" for the Lexus LS 460. This system maintains continuous control from speeds of 0 km/h to 100 km/h and is designed to work under repeated starting and stopping situations such as highway traffic congestion.[10] The Lexus division was the first to bring adaptive cruise control to the US market in 2000 with the LS 430's Dynamic Laser Cruise Control system.[11]

Mercedes introduced Distronic in late 1998 on the S-class.[12] For 2006, Mercedes-Benz refined the Distronic system to completely halt the car if necessary (now called 'Distronic Plus' and offered on their E-Class and S-Class range of luxury sedans), a feature now also offered by Bosch as 'ACC plus' and available in the Audi Q7, the Audi Q5, 2009 Audi A6 and the new 2010 Audi A8. The Audi A4 is available with an older version of the ACC that does not stop the car completely. In an episode of Top Gear, Jeremy Clarkson[citation needed] demonstrated the effectiveness of the cruise control system in the S-class by coming to a complete halt from motorway speeds to a round-about and getting out, without touching the pedals.

Jaguar began offering a system in 1999; BMW's Active Cruise Control system went on sale in 2000[citation needed] on the 7-series and later in 2007, added a system called Stop-and-Go system to the 5-series.[13] Volkswagen and Audi introduced their own systems in 2002[citation needed] through the radar manufacturer Autocruise.

Full cruise control (able to bring the car to a complete stop):