It derives its fibers from the eighth cervical and first thoracic nerves, and at its commencement is placed medial to the axillary artery.

It gives off, near the axilla, a filament, which pierces the fascia and supplies the integument covering the Biceps brachii, nearly as far as the elbow.

The nerve then runs down the ulnar side of the arm medial to the brachial artery, pierces the deep fascia with the basilic vein, about the middle of the arm, and divides into a volar and an ulnar branch.

It then descends on the front of the ulnar side of the forearm, distributing filaments to the skin as far as the wrist, and communicating with the palmar cutaneous branch of the ulnar nerve. 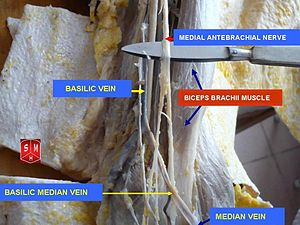 The ulnar branch (ramus ulnaris; posterior branch) passes obliquely downward on the medial side of the basilic vein, in front of the medial epicondyle of the humerus, to the back of the forearm, and descends on its ulnar side as far as the wrist, distributing filaments to the skin.