The parish of Chippenham covers 4,300 acres (1,700 ha) at the eastern end of Cambridgeshire. It is bordered by Suffolk to both the north (where the border follows the River Kennett) and the south (where the border follows the Icknield Way). To the east it is separated from Kennett, and to the west there are borders with Fordham and Snailwell, and a short border with Isleham. The present parish incorporates both the smaller medieval parish and the hamlet of Badlingham.[2]

Chippenham Park was created by Edward Russell, 1st Earl of Orford, MP for Cambridgeshire and First Lord of the Admiralty, who owned the estate from 1689 until his death in 1727. Russell remodelled the manor house and greatly extended the estate park which now dominates the parish to the south of the village.[2]

Royalty have visited Chippenham on numerous occasions. The first was in 1578 when Elizabeth I knighted Thomas Revett, lord of the manor at the time. William Russell's bowling green was used at times by Charles I in the 1640s and Charles II also visited in around 1669. The Earl of Orford received George I in 1717, and Edward VII was a regular visitor while Prince of Wales in the 1870s and 1880s. George V may also have attended shooting parties there.[2]

Listed as Chipeham in the Domesday Book of 1086, the name "Chippenham" probably means "river meadow of a man called Cippa".[3] 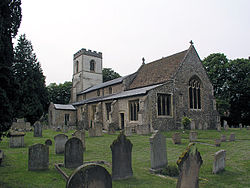 There has been a church in Chippenham since at least the 12th century which served both Chippenham and Badlingham. The present parish church has been dedicated to Saint Margaret of Antioch since 1279, and consists of a chancel with south chapel and north vestry, an aisled nave of seven bays, and a rectangular west tower. The oldest parts of the building date from the 12th century, with the nave added in the 13th century. The tower was rebuilt in the 15th century.[2]

The church has four 15th century wall paintings that were plastered over with psalms in the 17th century and rediscovered in the late 19th century.

John Gauden, later Bishop of Exeter and Worcester, was vicar of Chippenham in the 1630s.

The village has one pub, The Tharp Arms, which was opened in 1704 on the High Street. In the 18th century it was known as the New Goat Inn after which it was renamed The Angel and then The Hope Inn before receiving its present name in 1910. The current landlord of the pub is the nephew of magician Paul Daniels. There was also an outdoor beer tent listed in the village in the 1850s.[2]

Lord Orford founded the village's first school in 1708 and by 1712 a school building had been completed opposite the church (which survives today as a house). In 1821 additional space was added for junior children and children also attended from neighbouring Snailwell. In the mid-19th century the attendance was around 36, and after 1875 it rose steadily until there were 100 pupils in 1910. This then fell to 77 in 1919 and under 40 by the 1930s. In 1954 senior children were moved to Burwell and when numbers had fallen to only 25 juniors in 1978 the school closed, with the remaining children transferred to Isleham.[4]

A playground was built behind Tharp Way in 1980.