The Night They Drove Old Dixie Down

The Night They Drove Old Dixie Down

The Band also released a live album named for and featuring the song.

"The Night They Drove Old Dixie Down" is a song written by Canadian musician Robbie Robertson, first recorded by The Band in 1969 and released on their self-titled second album. Joan Baez' cover of the song was a top-five chart hit in late 1971. 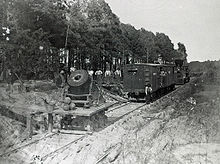 Confederate use of rail during the Siege of Petersburg.

The lyrics[1] tell of the last days of the American Civil War and the suffering of the South. Dixie is a nickname for the Southern Confederate states. Confederate soldier Virgil Caine "served on the Danville train" (the Richmond and Danville Railroad, a main supply line into the Confederate capital of Richmond, Virginia from Danville, Virginia, and by connection, the rest of the South). Union cavalry regularly tore up Confederate rail lines to prevent the movement of men and material to the front where Robert E. Lee's Army of Northern Virginia was besieged at Siege of Petersburg. As part of the offensive campaign, Union Army General George Stoneman's forces "tore up the track again".

The song's lyrics refer to conditions in the Southern states in the winter of early 1865 ("We were hungry / Just barely alive"); the Confederacy is starving and on the verge of defeat. Reference is made to the date May 10, 1865, by which time the Confederate capital of Richmond had long since fallen (in April); May 10 marked the capture of Confederate President Jefferson Davis and the definitive end of the Confederacy.

There is some poetic license in the song's dates and events, for instance the reference to Virgil Caine being home with his wife in Tennessee and seeing Robert E. Lee (Later performances, including the Joan Baez recording and some live versions by The Band themselves, added "the" before "Robert E. Lee", making it seem to relate to the Confederate ship the Robert E. Lee, and not the person, passing by).[2] Virgil also relates and mourns the loss of his brother: "He was just eighteen, proud and brave / But a Yankee laid him in his grave".

Ralph J. Gleason (in the review in Rolling Stone (US edition only) of October 1969) explains why this song has such an impact on listeners:

Nothing I have read … has brought home the overwhelming human sense of history that this song does. The only thing I can relate it to at all is The Red Badge of Courage. It's a remarkable song, the rhythmic structure, the voice of Levon and the bass line with the drum accents and then the heavy close harmony of Levon, Richard and Rick in the theme, make it seem impossible that this isn't some traditional material handed down from father to son straight from that winter of 1865 to today. It has that ring of truth and the whole aura of authenticity.

Robertson claimed that he had the music to the song in his head but had no idea what it was to be about: "At some point [the concept] blurted out to me. Then I went and I did some research and I wrote the lyrics to the song." Robertson continued:

When I first went down South, I remember that a quite common expression would be, "Well don't worry, the South's gonna rise again." At one point when I heard it I thought it was kind of a funny statement and then I heard it another time and I was really touched by it. I thought, "God, because I keep hearing this, there's pain here, there is a sadness here." In Americana land, it's a kind of a beautiful sadness.[3]

Context within the album and The Band's history

According to Rob Bowman's liner notes to the 2000 reissue of The Band's second album, The Band, it has been viewed as a concept album, with the songs focusing on peoples, places and traditions associated with an older version of Americana. Though never a major hit, "Dixie" was the centerpiece of the record, and, along with "The Weight" from Music From Big Pink, remains one of the songs most identified with the group.

The Band frequently performed the song in concert, and it can be found on the group's live albums Rock of Ages (1972) and Before the Flood (1974). It was also a highlight of their "farewell" concert on Thanksgiving Day 1976, and is featured in the documentary film about the concert, The Last Waltz, as well as the soundtrack album from the film. It was #245 on Rolling Stone magazine's list of the 500 greatest songs of all time.[4] Pitchfork Media named it the forty-second best song of the Sixties.[5] The song is included in the Rock and Roll Hall of Fame's "500 Songs that Shaped Rock and Roll" and Time Magazine's All-Time 100.[6][7]

The last time the song was performed by Levon Helm, The Band's lead singer, was in The Last Waltz (1976). Helm, a native of Arkansas, has stated that he assisted in the research for the lyrics.[4] In his 1993 book This Wheel's on Fire, Helm writes "Robbie and I worked on 'The Night They Drove Old Dixie Down' up in Woodstock. I remember taking him to the library so he could research the history and geography of the era and make General Robert E. Lee come out with all due respect."

Helm has refused to play the song since 1976 even though Helm holds concerts, which he calls "Midnight Rambles", several times a month at his private residence in Woodstock, New York.

Covers of the song

The most successful English-language cover of the song was a version by Joan Baez released in 1971, which peaked at number three on the Billboard Hot 100 chart in the US in October that year and spent five weeks atop the easy listening chart.[8] Baez's version made some changes to the song lyric; The second line "Till Stoneman's cavalry came". Baez sings "Till so much cavalry came". She also changed "May the tenth" to "I took the train". In addition, the line "like my father before me, I will work the land" was changed to "like my father before me, I'm a working man", changing the narrator from a farmer to a laborer. In the last verse she changed "the mud below my feet" to "the blood below my feet". Baez later told Rolling Stone's Kurt Loder that she initially learned the song by listening to the recording on the Band's album, and had never seen the printed lyrics at the time she recorded it, and thus sang the lyrics as she'd (mis)heard them. In more recent years in her concerts, Baez has performed the song as originally written by Robertson.[9] The song became highest charting U.S. single of Baez' career, and remained a staple of her concert set list, from that point forward.

In 1972, a cover of the song called "Am Tag als Conny Kramer starb" (translation: "On the Day that Conny Kramer Died") was a number-one hit in West Germany for singer Juliane Werding. For this version, the lyrics were not translated but rather changed completely to an anti-drug anthem about a young man dying because of his drug addiction - an extremely hot topic in that year, when heroin was making the first big inroads in Germany. In 1986, the German band Die Goldenen Zitronen made a parody version of this song with the title "Am Tag als Thomas Anders starb" ("On the Day that Thomas Anders Died").

The Band's version of "The Night They Drove Old Dixie Down" was used in the 1977 film "The Shadow of Chikara" (also titled "Curse Of Demon Mountain" and several other titles).

Personnel on The Band version