Times Square Ball
"Ball drop" redirects here. For a listing of other ball drops or raisings around the world, see List of objects dropped on New Year's Eve. 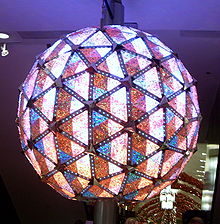 The Centennial version of the ball as seen at Macy's in Herald Square in preparation for the 2008 drop. The current ball is larger but has an identical design.

The Times Square Ball is a time ball dropped each year during the New Year’s Eve celebration in Times Square, Manhattan, New York City. The ball is made by Waterford Crystal[1] and electric lights is raised to the top of a pole on the One Times Square building at 6:00 pm[1] and then lowered to mark the coming of the New Year. The ball descends 77 feet (23 m) over the course of a minute, coming to rest at the bottom of its pole at midnight, and a sign lights up with the digits of the new year, as the ball's lights turn off. Toshiba's Times Square billboard directly below the ball counts down to midnight as well.

Every year up to one million people gather in Times Square to watch the ball drop, and an estimated 1 billion watch the video of the event, 100 million of them in the United States.[2]

The first New Year's Eve celebration in the area was held in 1904. The New York Times newspaper had opened their new headquarters on Longacre Square (the city's second tallest building), and persuaded the city to rename the triangular "square" surrounding it for the newspaper. The newspaper's owner, Adolph Ochs, decided to celebrate the move with a midnight fireworks show on the building for New Year's Eve. Close to 200,000 attended the event, displacing celebrations held at Trinity Church.[3] However, Adolph wanted a bigger spectacular at the building to draw more attention to the square — in 1907, the paper's chief electrician Walter F. Palmer constructed a lit ball that would be lowered from a flagpole at One Times Square. It was constructed with iron and wood, was lit with one hundred 25-watt bulbs, weighed 700 pounds (320 kg) and measured 5 feet (1.5 m) in diameter. At first, it dropped 1 second after midnight. Even after the Times moved its headquarters to 229 W. 43rd St., the celebration continued.[3]

The Ball received its first upgrade in 1920, replaced by one made of Iron, now only weighing 400 pounds (180 kg) — it would then be replaced by an 150 pounds (68 kg) aluminum ball in 1955. During World War II, the descending of the Ball was stopped due to wartime lighting restrictions in case of enemy attack. Celebrants observed a moment of silence at midnight, followed by chimes.[3] From 1981 to 1988, the Ball would be decorated in honor of the I Love New York campaign, with red bulbs and a green stem to give it the appearance of an apple. The original white bulbs would return in 1989, but replaced for 1991 with red, white, and blue bulbs to salute the troops of Operation Desert Shield.

The Times Square Ball designed for the new millennium in 2000, on display at the Waterford Crystal Factory.

The Ball would be revamped again in 1995, adding rhinestone, and a computerized lighting system featuring strobe lights. This ball would be used for the remainder of the decade.[1] For the new millennium, an entirely new ball would debut. Weighing 1,070 pounds (490 kg) and measuring 6 feet (1.8 m) in diameter, it would be covered with 504 crystal triangles (provided by Waterford Crystal), illuminated externally with 168 halogen light bulbs and internally with 432 light bulbs of clear, red, blue, green and yellow colors, along with strobe lights and spinning mirrors. Many of the triangles are inscribed with messages of a certain theme, such as “Hope for Fellowship,” “Hope for Wisdom,” “Hope for Unity,” “Hope for Courage,” “Hope for Healing,” and “Hope for Abundance. On December 31, 2006, this ball was dropped for the last time.

In honor of the Ball Drop's 100th anniversary, another new ball debuted for 2008. While still manufactured by Waterford Crystal (and weighing 1,212 pounds (550 kg)), it now uses LED lighting provided by Philips (which can produce over 16.7 million colors, and programmed for more advanced patterns and effects, designed by local firm Focus Lighting) instead of halogen bulbs. The ball features 9,567 energy-efficient bulbs that consume the same amount of electricity as only ten toasters.[2] For 2009, the design was maintained as a icosahedral geodesic sphere, but doubled in size to 12 feet (3.7 m) in diameter with a weight of 11,875 pounds (5,386 kg). To accommodate the new ball (which is also now displayed year-round), the flagpole atop of One Times Square was rebuilt and enlarged, now rising 475 feet (145 m) above Times Square.[4]

Sound effects during the countdown debuted in 1998. Every year had different sound effects except for 1999-2000 and 2000-2001 ball drops, which used the same exact sounds. The current clock-ticking debuted in 2003 and has been used since then for every single countdown.

The average temperature at midnight in New York City since the ball dropping tradition began in 1907 is 33.7 °F (1 °C).

Up to one million people go to watch the ball drop each year. Therefore, New York Police Department (NYPD) exert strict control over the crowd so as to prevent crushes and stampedes. The technique used by NYPD is to divide Times Square up into sections, commonly referred to as "pens." As people arrive, usually in the afternoon, they are directed into the pens. NYPD starts with the pens closest to 43rd Street, and as those pens get full, closes them to further people and works their way back toward Central Park. Once inside the pen, people may leave, but will not be able to reenter the pen.

Also, access to Times Square is extremely limited during the course of the celebration. Those staying in hotels in the area need to prove to NYPD that they are in fact guests at those hotels. Also, no alcoholic beverages are permitted[6] (as per NYC's open container laws), and there are no portable public restrooms available.[6]

Several networks have aired coverage of the Times Square Ball Drop; as the event is held in the public square there is no rights or exclusive coverage. Most notable is ABC's Dick Clark's New Year's Rockin' Eve with Ryan Seacrest,[7] hosted for 38 years by Dick Clark and recently joined by Ryan Seacrest after Clark suffered a stroke in 2004, as well as a West Coast segment hosted by singer Fergie. Because of its prominence, ABC has been able to get exclusive rights to hold concerts in Times Square itself.

NBC also has coverage of the events under the name New Year's Eve with Carson Daly;[8] previously a special edition of The Tonight Show with Jay Leno (and before that, The Tonight Show Starring Johnny Carson) would air in this slot, but Leno has since ceded hosting duties to Daly, who hosts more conventional coverage. Since NBC cannot hold concerts in Times Square itself, it instead opts for concerts outside its studios at 30 Rockefeller Center and in Los Angeles.

Fox also has its own coverage of the New Year's Eve event, New Year's Eve Live, which started in 2003–04. Ryan Seacrest hosted the first two years; in 2005–06, Regis Philbin (who had filled in for Clark on ABC the year prior) took over as Seacrest went to ABC. Fox's host changes each year; Nancy O'Dell will host 2011's festivities.[9] Fox complements the Times Square coverage with All American New Year, which airs live in all time zones on sister network Fox News Channel and is hosted by Fox News anchors Bill Hemmer and Megyn Kelly.

For many years CBS was known for its coverage of the ball drop featuring Guy Lombardo and his Royal Canadians band (he had done so on CBS Radio Network since 1928 and on TV since 1956), live from The Waldorf-Astoria Hotel and featuring the now famous rendition of "Auld Lang Syne". Lombardo died in November 1977; the Royal Canadians did the show for two more years (with Victor Lombardo substituting for his late older brother for 1977-78) but would disband after that. The broadcasts continued under the name Happy New Year, America beginning in 1979-80, still live from the Waldorf-Astoria (with taped segments added from Billy Bob's in Texas and Walt Disney World), with various guest hosts (among them Andy Williams, Brent Musburger, Gladys Knight, Christie Brinkley, Natalie Cole, Kermit the Frog and Lily Tomlin in character as "Ernestine the Telephone Lady"). The last broadcast was in 1995–96 and featured Montel Williams as host; in 1996, Disney pulled out of producing the program (and several other CBS holiday specials) when it bought ABC, and CBS decided to discontinue its New Year's coverage. CBS no longer covers the ball drop and instead opts for reruns of The Late Show with David Letterman. Some CBS affiliates show local ball drops instead.