Deepika Padukone (Hindi: दीपिका पडुकोण - [diːpɪkaː ˈpəɖʊkoːɳ]; born 5 January 1986) is an Indian actress and a former model. She appears mostly in Hindi as well as Tamil and Kannada language films. Born to Badminton player Prakash Padukone, she chose to become an actress and not pursue a career in sports.[1]

Padukone made her acting debut in the 2006 Kannada film Aishwarya. The following year, she made her Hindi film debut in the blockbuster Om Shanti Om opposite Shah Rukh Khan, which earned her the Filmfare Best Female Debut Award. It also remains her biggest commercial success so far. She subsequently appeared in films such as Love Aaj Kal (2009) and Housefull (2010). While the former earned her a Filmfare nomination in the Best Actress category, the latter emerged as a commercial success.[2]

In addition to acting, Padukone is also the ambassador of prominent brands such as Tissot, Sony Cybershot, Nescafe and Kingfisher Airlines.[3]

Padukone was born in Copenhagen, Denmark. Her family moved to Bangalore, Karnataka, India, when she was eleven months old.[4] Padukone is of Chitrapur Saraswat Brahmin origin, and her mother tongue is Konkani.[5] Her father, Prakash Padukone, is a retired badminton player of international repute, and her mother is a travel agent. Padukone also has a younger sister, Anisha, born on 2 February 1991.[6]

Padukone attended Sophia High School in Bangalore, and completed her pre-university studies at Mount Carmel College Bangalore.[7] While in high school she played badminton at the state level.[8] However, she was not keen on pursuing a career as a badminton player.[9] During the time of her film debut she was enrolled with the Indira Gandhi National Open University in Bachelors of Arts Sociology major.[10][11]

While in college, Padukone pursued a career in modeling.[12] She was spotted in a ramp competition in NLS, Bangalore.[citation needed] Over the years, she has modeled for such Indian brand names as Liril, Dabur Lal powder, Close-Up toothpaste and Limca, and has been "brand ambassador" for the Jewels of India retail jewelry show.[13] The cosmetics company Maybelline made her its international spokesperson.[14]

Deepika Padukone as a model

At the fifth annual Kingfisher Fashion Awards she was awarded the title "Model of the Year".[15] Shortly afterward, she was chosen as one of the models for the Kingfisher Swimsuit Calendar for 2006 and won two trophies at the Idea Zee Fashion Awards: "Female Model of the Year - (Commercial Assignments)" and "Fresh Face of the Year".[16][17] Padukone was also chosen as the brand ambassador of Kingfisher Airlines and later Levi Strauss and Tissot SA.[18] In addition, she appeared in the music video for Himesh Reshammiya's song Naam Hai Tera.

In 2006, Padukone made her cinematic debut in the Kannada film Aishwarya opposite actor Upendra. She later made a successful Bollywood debut in 2007 with Farah Khan's blockbuster Om Shanti Om opposite Shahrukh Khan. The film was a re-incarnation melodrama, featuring her in a double role.[19][20] Her performance was well received, earning the actress a Filmfare Best Female Debut Award as well as her first Filmfare Best Actress nomination. Taran Adarsh from indiaFM noted, "Deepika has all it takes to be a top star — the personality, the looks and yes, she's supremely talented too. Standing in the same frame as SRK and getting it right is no small achievement. She comes as a whiff of fresh air!"[21] About being cast opposite Shah Rukh Khan, she said,

Padukone was then seen playing a feisty, modern-day Indian woman, Gayatri, in Siddharth Anand's romantic comedy Bachna Ae Haseeno alongside Ranbir Kapoor, Bipasha Basu and Minissha Lamba.[23] The film, which released on 15 August 2008, performed reasonably well at the box office, but her performance drew flak. Adarsh wrote, "Deepika is a sore point. Her role isn't convincing and that's the reason why this performance doesn't work. The only consolation is, she looks gorgeous."[24] 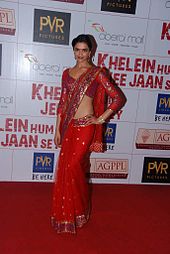 She played a double role again in her next film, Chandni Chowk To China, which released on 16 January 2009. The film, directed by Nikhil Advani, also featured Akshay Kumar, Mithun Chakraborty and Ranvir Shorey in the lead. It was a critical and commercial disaster, with Nikhat Kazmi of The Times Of India commenting, "Deepika looks lost and forlorn for most of the film."[25]

Padukone's fourth release Love Aaj Kal, released on 31 July 2009 and proved to be one of the biggest hits of 2009.[26] Directed by Imtiaz Ali, the film documented the changing value of relationships among the youth. Padukone played the role of Meera Pandit, a practical and head-strong career woman opposite Saif Ali Khan. Of her performance, NDTV's Anupama Chopra wrote, "Deepika looks fabulous but she isn’t a strong enough actor to breathe life into the character."[27] Despite this, she received her second Filmfare Award for Best Actress nomination.[2] The same year, she teamed up with Farah Khan and Shah Rukh Khan once again for an item number in the Irrfan Khan-Lara Dutta starrer Billu.[28] She also made guest appearances in the Telegu film Love 4 Ever and in Sohail Khan's Main Aur Mrs Khanna.[29][30]

Her first release in 2010 was Excel Entertainment’s Karthik Calling Karthik. The thriller featured Farhan Akhtar as Karthik, a troubled schizophrenic man, and Padukone as his supportive girlfriend, Shonali Mukherjee. This time, Anupama Chopra wrote, "Padukone finally seems to be thawing in front of a camera."[31] The film, however, was a commercial failure.[32] She then featured in Sajid Khan's multistarrer Housefull with Akshay Kumar, Ritesh Deshmukh, Lara Dutta, Arjun Rampal, Jiah Khan and Boman Irani . She played the role of Soundarya Bhagyalakshmi Venkateshwari Baassappa Rao, Kumar's girlfriend and later fiancée. The film became a blockbuster in India, with a net gross of INR 95 crores in the first week itself.[33] As for her performance, Taran Adarsh mentioned that "Deepika is a surprise. She carries her part with amazing confidence...Housefull is the film that would make people notice her talent as well as beauty".[34]

She then appeared in her second Yash Raj production, Lafangey Parindey which was directed by Pradeep Sarkar. She starred opposite Neil Nitin Mukesh as Pinky Palkar, a blind girl, hell bent on winning a skating competition. Upon release, Sudhish Kamath, of The Hindu wrote, "This really is Deepika Padukone's film though. She exercises considerable restraint, dances, skates, makes you cry and smile."[35] 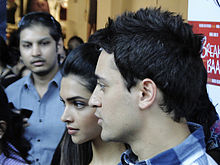 Her next release was Kunal Kohli's syrupy romance Break Ke Baad opposite Imran Khan, where she played Aaliya Khan, an impetuous brat. The film was not a commercial success, but won Padukone favorable reviews.[36] Nikhat Kazmi noted, "Padukone's climactic act seems to be the best performance in her entire career: completely spontaneous, crazy and cute."[37]

Her final release of 2010; Ashutosh Gowarikar's Khelein Hum Jee Jaan Sey top-lining Abhishek Bachchan, met with scathing reviews and was declared a flop. The period drama was a retelling of the 1930 Chittagong armoury raid, with Bachchan playing the revolutionary leader Surya Sen and Padukone playing Kalpana Dutta, his lover and confidant.[38] A review carried by The Hollywood Reporter, however, mentioned her portrayal of Dutta as "impressive".[39]

She began the year 2011 with an item number in Rohan Sippy's Dum Maaro Dum starring Abhishek Bachchan and Bipasha Basu in the lead. Her song was a remixed version of Zeenat Aman's iconic song from Hare Rama Hare Krishna.[40] The raunchy lyrics and suggestive dancing received mixed reviews. The Deccan Chronicle mentioned her moves as "mechanised gyrations", while Adarsh wrote, "Deepika scorches the screen in the title track. "[41][42]

Padukone at a promotional event for Aarakshan. Pictured with Prakash Jha

Next, she featured in Prakash Jha's reservation melodrama, Aarakshan starring alongside Amitabh Bachchan, as his daughter, and Saif Ali Khan, as his love-interest.[43] Pratim D. Gupta noted, "Deepika, though, is again the refreshing thing about a movie. Both her scenes with Bachchan — one where she revolts and the other where she redeems herself — show how she has come of age as an actor."[44]

As part of NDTV's Greenathon Campaign, Padukone adopted Ambegaon, a village in Maharashtra, that was facing a major electricity crisis.[47]

On November 2010, she appeared on Koffee With Karan, a popular chat show along with Sonam Kapoor. Her comments on ex-flame Ranbir Kapoor lead to a lot of controversy among Bollywood inner-circles.[51]

In March 2008, Padukone began dating Ranbir Kapoor, her co-star from the film Bachna Ae Haseeno (2008).[52] After her high profile break up with Kapoor in November 2009, Padukone has decided to keep her personal life away from media attention.[53]