Mithun Chakraborty (Bengali: মিঠুন চক্রবর্তী Miṭhun Chôkroborti, born as Gouranga Chakraborty on June 16, 1950, Kolkata, India) is an Indian film actor, social activist, and entrepreneur, who has won three National Film Awards. He made his acting debut with the arthouse drama Mrigaya (1976), for which he won his first National Film Award for Best Actor.

He had earned a fan following as a dancing star and went on to establish himself as one of the most popular and leading actors of India, particularly recognized for his role as street dancer Jimmy in the 1982 Bollywood movie Disco Dancer. He also attracted worldwide audiences, particularly in the former Soviet Union[2] where he became a household name for his role in Disco Dancer.[3] He later won two more National Film Awards for his performances in Bengali film Tahader Katha (1992) and Hindi film Swami Vivekananda (1998).

Chakraborty has appeared in about 350 films,[4] including Bengali, Oriya and Bhojpuri pictures. He owns the Monarch Group, which has interests in the hospitality sector [5] and educational sector.[6]

He was educated at the Oriental Seminary and later, graduated in chemistry from the Scottish Church College in Kolkata.[7] He was initially associated with Naxalites in West Bengal, which he later left and joined Mumbai films. For rest of his life, his family had continuous threat from Naxalities. After that he attended and graduated from the Film and Television Institute of India in Pune.

Mithun Chakraborty was a staunch Naxalite before entering the film industry, but tragedy struck his family when his only brother was electrocuted and killed in a freak accident. He returned to his family and left the Naxalite fold, even though doing so posed a grave risk to his own life. He had also undergone expert training in Martial Arts to the grade of black belt.[8] 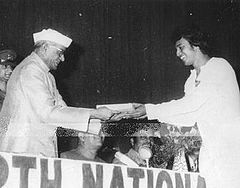 Mithun Chakraborty made his film debut in the 1976 Mrinal Sen directed film Mrigaya for which he won the coveted National Film Award for Best Actor. Then he shared screen with Amitabh Bachchan, a small role in Do Anjaane, followed by Phool Khile Hain Gulshan Gulshan, Hamara Sansar and Amar Deep. Mithun rose to stardom in the late 1970s with the low budget Ravikant Nagaich directed spy film Surakshaa, a desi bond flick relased in 1979. The film was so successful, as many movies starring Mithun in lead role was launched. The hit combination with director Deepak Bahry also happened for the first time in 1979 with Tarana. Another important film for Mithun in late 70s was Prem Vivah directed by Basu Chatterjee.

His breakthrough role came with the 1982 musical drama Disco Dancer which was a huge success and remains a cult favorite to this day. This film and other musical films such as Kasam Paida Karne Wale Ki (1984) and Dance Dance (1987), in a time where dancing was essentially a woman's forté in India, showcased him as a talented dancer.

Chakraborty went on to star in a number of successful romantic and family dramas during the 1980s, such as Mujhe Insaaf Chahiye (1983), Ghar Ek Mandir (1984), Pyaar Jhukta Nahin (1985), Swarag Se Sunder (1986) and Pyaar Ka Mandir (1988). These films remain his most commercially successful films to date.[9]

He was also widely recognized as an action hero in hit films like Jagir (1984), Jaal (1986), Watan Ke Rakhwale (1987) and Waqt Ki Awaz (1988). Chakraborty achieved not only commercial success but also tremendous critical acclaim. His performances in Mrigaya, Tahader Katha, Swami Vivekananda, Kalpurush and Titli were widely appreciated and won him National Film Awards and nominations. He won two Filmfare awards: The Filmfare Best Supporting Actor Award for his performance in the 1990 film Agneepath, and the Filmfare Best Villain Award for his performance in Jallad.

In early 90s, Chakraborty took a break from Mumbai and relocated to Ooty where he set up a hotel business under the brand name The Monarch. He operates hotels in Mudhumalai and Ooty in Tamil Nadu, Darjeeling, Siliguri [10] and Kolkata in West Bengal.[11] Mithun strategically shifted his focus from mainstream Hindi cinema to low-budget movies. Hit movies like Dalaal (1993), Phool Aur Angaar (1994) and Ravan Raaj: A True Story (1995) were made during this period. His economical film production was popular as Mithun's Dream Factory.[12][13][14][15][16] He paid more tax than anyone else in the country in the mean period for 5 continuous years, from 1995 to 1999.[17] By this time, Chakraborty held the record for appearing in the most number of Hindi films as a hero.

Chakraborty made a comeback to the mainstream Hindi film industry in 2005 with the film Elaan. After a few supporting roles in films such as Lucky: No Time for Love (2005), he was acclaimed for his villainous role in Kalpana Lajmi's Chingari (2005). In 2007 he starred in Mani Ratnam's hit film Guru. His 2009 movie Zor Lagaa Ke...Haiya! won multiple International awards [18] and Chal Chalein was appreciated by critics for its bold theme. Critically acclaimed Phir Kabhi with Dimple Kapadia had a very successful première through a direct to home (DTH) release in September 2009 and won as many as six awards in as many categories at the Los Angeles Reel Awards-2009. Mithunda's last Hindi releases Veer, along with Salman Khan, though a commercial failure, won him rave reviews, but Golmaal 3 became a blockbuster at the box-office. He has worked on Spaghetti 24 x 7 with his son Mimoh Chakraborty, and is set to appear in Housefull 2 in an action role with Akshay Kumar.

Parallel to his Bollywood career, Mithun Chakraborty has also worked in Bengali, as well as in realistic or arthouse movies including Troyee, made in 1982. He appeared in director Buddhadeb Dasgupta's Tahader Katha which got him the second National Award in 1992. A third National Award followed in 1995, this time for the Best Supporting Actor, for his portrayal of Ramakrishna Paramhansa, in G V Iyer's Swami Vivekananda. Mithun, occasionally done Bengali films like Anyay Abichar, Swarna Trishna and Jiban Yuddha, but post 2000, he has concentrated more in Bengali films. He also appeared in Goutam Ghose's Gudia in 1999 as well as Rituparno Ghosh's Titli in 2002. In 2008, he collaborated again with Buddhadeb Dasgupta for Kaalpurush and later appeared in hit films Shukno Lanka and Ami Shubhash Bolchi.

Mithun Chakraborty was also the co-owner of Royal Bengal Tigers, a cricket team of the now abandoned Indian Cricket League.[19]