Muskoka Lakes
Not to be confused with Lake Muskoka.

The area now covered by the township was opened for settlement and organized in 1870 into the following geographic (and sometime municipal) townships of Watt, Cardwell, Humphrey, Christie, Medora and Wood.

The municipal offices are located in Port Carling. 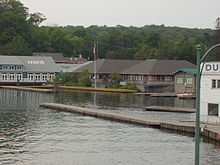 The township is located on Canadian Shield and thus is marked with outcrops of igneous rock and evergreen trees. Although inland from both Lake Huron's Georgian Bay and Lake Simcoe, the township contains the Muskoka Lakes consisting of Lake Muskoka, Lake Rosseau and Lake Joseph, amongst many other smaller lakes.

Timber was initially the greatest economic attraction for the region. The soil is poor and rocky and consequently is not especially suited to agriculture.

As the resource industries dried up, the area soon latched onto tourism as its economic base based on its proximity to Toronto and the rest of Southern Ontario. For many Ontarians, this is the centre of cottage country.