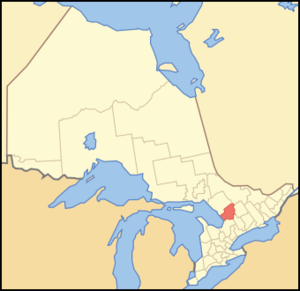 The District Municipality of Muskoka, more generally referred to as the District of Muskoka or, simply, Muskoka is a Regional Municipality located in , . Muskoka extends from in the west, to the northern tip of in the south, to the western border of in the east. Located approximately two hours north of , Muskoka spans 2,500 square miles (6,475 km²). Muskoka has some 1,600 s, making it a popular resort destination. Indeed, this region, which, along with Haliburton and Kawartha Lakes, is referred to as "", sees over 2.1 million visitors annually. Muskoka is a scenic area sprinkled with picturesque villages and towns, farming communities, and lakeside vacation hotels and resorts near to s, s, and s. The regional government seat is Bracebridge. This area encompases Lake of Bays township, Georgian Bay township, Muskoka Lakes township and the towns of Huntsville, Bracebridge and Gravenhurst.

There are six municipalities in Muskoka: the towns of Bracebridge, Gravenhurst, and Huntsville; and the townships of Georgian Bay, Lake of Bays, and Muskoka Lakes. The Wahta Mohawk Territory and Moose Point 79 are also in the district.

Geography drove history in the Muskoka region. Studded with lakes and abundant with rocks the land offered an abundance of fishing, hunting, and trapping, but was poorly suited to farming. Largely the land of the Ojibwa people, European inhabitants ignored it while settling the more promising area south of the Severn River. The Ojibwa leader associated with the area was Mesqua Ukie for whom the land was probably named. The tribe lived south of the region, near present day and used Muskoka as their hunting grounds. Another Ojibwa tribe lived in the area of Port Carling which was called Obajewanung. The tribe moved to Parry Sound around 1866.

Largely unsettled until the late 1760's the European presence in the region was largely limited to seasonal fur trapping, but no significant trading settlements were established. Canadian government interest increased following the when, fearing invasion from it's new neighbor to the south the government began exploring the region in hopes of finding travel lanes between Lake Ontario and Georgian Bay [Ahlbrandt p 16] In 1826 Lieutenant Henry Briscoe became the first white man known to have crossed the middle of Muskoka. David Thompson drew the first maps of the area in 1837 and possibly camped near present day Beaumaris.

Canada experienced heavy European immigration in the mid 1800's, especially from Ireland which experienced famine in the 1840's. As the land south of the Severn was settled, the government planned to open the Muskoka region further north to settlement. Logging licenses were issued in 1866 which opened Monck Township to logging. The lumber industry expanded rapidly denuding huge tracts of the area, but also prompting the development of road and water transportation. The railroad pushed north to support the industry, reaching Gravenhurst in 1875 and Bracebridge in 1885. Road transportation took the form of the Muskoka Colonization Road, begun in 1858 and reaching Bracebridge in 1861. The road was roughly hewn from the woods and was of corduroy construction, meaning logs were placed perpendicular to the route of travel to keep carriages from sinking in the mud and swamps. Needless to say this made for extremely rugged travel. The lumbering industry spawned a number of ancilary developments, including as mentioned, transport, but also settlements began springing up to supply the workers and Bracebridge, (formerly North Falls) saw some leather tanning businesses develop. Tanners used the bark from lumber to tan hides therby using what otherwise would be a waste product.

The passages of the Free Grants and Homestead Act of 1868 brought opened the era of widespread settlement to Muskoka. Settlers could receive free land if they agreed to clear the land, have at least 15 acres under cultivation, and build a 16 by 20 foot house. Settlers under the Homestead Act, however, found the going hard. Clearing 15 acres of dense forest is a huge task, but once the land was clear they were greeted with Muskoka's ubiquitous rocks, which themselves had to be cleared. The soil in the region turned out to be poorly suited to farming consisting largely of a dense clay. As news of the difficult conditions spread back to the south it looked as though development in Muskoka might falter but for a fortuitous development. In a time when the railroads had not yet arrived and road travel was notoriously unreliably and uncomfortable, the transportation king was the steamship. Once a land connection was made to the southern part of the lake in Gravenhurst the logging companies could harvest trees along the entire lakefront with relative ease, so long as they had the means of powering the harvest back to the sawmills in Gravenhurst.

Alexander Cockburn answered the call. Sometimes called the Father of Muskoka, [Ahlbrandt p 21] Cockburn began placing steamers on the lake. Starting with the Wenonah, Ojibwa for first daughter, in 1866 Cockburn pressed the government to open the entire Muskoka lake system to navigation by installing locks in Port Carling and opening a cut between Lake Rosseau and Lake Joseph at Port Sanfield. The government responded to the call, eager to reinforce development in light of the faltering agricultural plan, and built the big locks in Port Carling in 1871. Now Cockburn's steamers had access to the entire lake system. Through the years he added more ships and when he died in 1905 his Muskoka Navigation Company was the largest of its kind in Canada. [Ahlbrandt p 21]

Shortly after the arrival of the steamships the seeds were planted which would grow in the rocky soil as agriculture never would. In 1860 two young men, John Campbell and James Bain Jr made a journey that marked them as perhaps the first tourists in the region. [Ahlbrandt p35] Taking the Northern Railway to lake Simcoe, they took the steamer "Emily May" up the lake to Orillia, rowed across Lake Couchiching they walked up the Colonization Road to Gravenhurst where they vacationed. They liked what they saw and repeated the journey every year bringing friends and relatives. These early tourist pioneers increased demand for transport services in the region, drawn by excellent fishing, natural beauty, and an air completely free of ragweed providing relief for hay fever sufferers. Early tourists built camps, but were joined by others desiring better accomodations. Farmers who were barely scratching a living from the rocky soil soon found demand for overnight accommodations literally arriving on their doorsteps. Some made the switch quickly and converted to boarding houses and hotels. The first wilderness hotel was built at the head of Lake Rosseau in 1870, called Rosseau House. It was owned by New Yorker W.H. Pratt. The idea caught on and tourists came establishing the tourist industry as the up-and-coming money earner in the 1880's.

The steamship era gave rise to the area's great hotels; Rosseau, Royal Muskoka, Windemere, and Beaumaris. When the railroad reached Gravenhurst in 1875 the area grew rapidly. Travel from Toronto, Pittsburgh, and New York became less a matter of endurance than expenditure. Trains regularly made the run from Toronto to Gravenhurst where travellers and their luggage were transferred to the great steamers of the Muskoka Navigation Co such as the Sagamo. Making regular stops up the lakes, including Bracebridge, Beaumaris, and Port Carling, tourists there could transfer to smaller ships such as the Islander which could reach into smaller ports. The hotels became the centers of vacationers lives which could stretch for weeks or even months in the summer. As families became seasonally established they began building cottages near the hotels; at first simple affairs replicating the rustic environment of the early camps, but later grander including in some cases housing for significant staff. Initially cottagers relied on rowboats and canoes for daily transport and would sometimes row substantial distances. Eventually the era of the steam and gasoline launch came and people relied less on muscle power and more on motors. With the boats came the boathouses, often elaborate structures in their own right mimicking in many cases the look and feel of the main cottage.

The coming of the car

caused a significant dip in the tourist activity for the area and hence the economy. After the war, however, significant advances in the brought demand for improved (paved) roads. These two developments, motorboats and private cars brought greater overall development of the area and spread development out over the lakes. Freed from the ports of call of the steamships, people built cottages farther afield. Demand began dropping for the steamship lines. caused another decline as wartime shortages kept many Americans at home and many Canadians were engaged in war activities. Postwar prosperity brought another boom based around the automobile and the newly affordable boat. Suddenly owning a summer cottage became possible not only for the adventurous or the wealthy, but for many in the middle class. The steamship companies retired their boats one by one until the last sailing in the late 1950's.

Cardwell township named for Viscount Cardwell, Secretary of State for the Colonies from 1864 to 1866.

Freeman township named for , MPP for the North riding of Norfolk County from 1879 to 1890.

Gibson township named for Thomas Gibson MPP for a Huron riding from 1867 to 1898.

Medora township named for Mrs. Medora Cameron wife of a Toronto lawyer. She was also a niece of Hon. Stephen Richards, Commissioner of Crown Lands, hence the honour she received.

Monck township named for Viscount Monck, Lord of the Treasury in the Palmerston government in Great Britain from 1855 to 1857 and governor-general of British North America form 1861 to 1868.

Morrison township named for Mr. who represented the North riding of Simcoe County from 1854 to 1863. Morrison was also a director of the old Northern Railway of Canada, Muskoka's pioneer railway, the terminus of which was . Morrison was also Mayor of Toronto from 1876 to 1878.

Muskoka township and district and lake are named for one of the principal Chief of the Chippawa Nation. In 1815 he signed the treaty which the Indian title to a vast territory was surrendered to the Crown. The name means "Red Ground".

Oakley township named for one (which one is uncertain) of 13 villages of the name in Great Britain, 12 of which are in England, one in Scotland.

Ridout township named for the Ridout family, a very prominent Toronto family. They came from Sherborne in Dorsetshire, England, hence the name of Sherborne township, Haliburton County, which adjoined Ridout township on the East and hence also Dorset, a village in the township. Thomas Ridout was Surveyor-General of Upper Canada.

Ryde township named for the town of Ryde on the .

Sinclair township, named for Donald Sinclair MPP for the North Riding of Bruce County from 1867 to 1883.

Stephenson township named for , son of of locomotive fame, Robert Stephenson designed the Victoria Tubular Bridge at Montreal, then the greatest Canadian bridge.