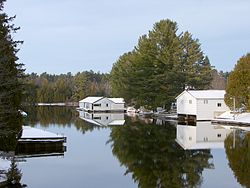 Lake of Bays is a township within the District Municipality of Muskoka, Ontario, Canada. It is named after the Lake of Bays.

Located in the northeast corner of Muskoka, the Lake of Bays offers a natural landscape of forests, rocks, lakes and wetlands. Because of its natural beauty, it is an important cottaging, recreation and tourism destination in Ontario. Currently, the economy of the township is primarily based on tourism, recreation, and the service sector with forestry and aggregate (composite) extraction contributing as well.

Lake of Bays was established in 1971 from the former townships of Franklin, Ridout, McLean, Sinclair and Finlayson in the District of Muskoka.

Lake of Bays is situated in Ontario's cottage country and has long been a vacation destination for the inhabitants of Toronto and the surrounding areas. In the early 20th century Bigwin Inn, a resort that once operated on Bigwin Island, was a sought after destination point by many individuals and groups.

The township was once home to the smallest commercial railway line in the world called the Portage Railway. Between 1904 and 1958 it ferried passengers between North Portage on Peninsula Lake to South Portage on Lake of Bays, a distance of 2 km. The train, named the Portage Flyer, was discontinued in 1958 and was relocated to an amusement park near St. Thomas, Ontario until 1984. Much of the original components have since been repatriated and continue to operate on the grounds of Muskoka Heritage Place near Huntsville.

A small community developed on the subdivided landholdings of a sawmill built by William Brown in the 1870s. The economic development of Baysville was enabled by good road and steamboat connections. Baysville developed into a popular region for vacationers and sportsmen. [1]

The 1949 FitzPatrick Traveltalk Ontario: Land of Lakes includes a segment on Bigwin Inn.

In 1963 the former Dorset Fire Tower was shown in the opening credits of the old CBC tv show The Forest Rangers.

The lake scenes from the Canadian film starring Gordon Pinsent called Away From Her were also shot in the township on the south shore of Lake of Bays across from Price's Point.

The Dorset Fire Tower can be seen in the 1999 Canadian documentary, Over Canada: An Aerial Adventure.b

Shania Twain has a home in Lake of Bays.